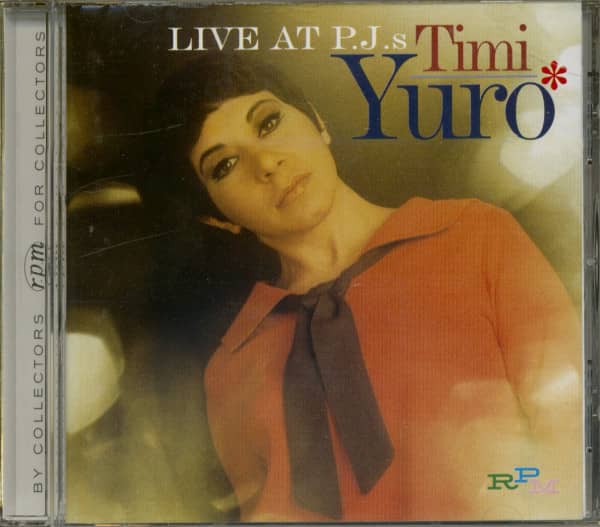 (2000/RPM) 15 tracks - 6 panel color fold-out.
-
The original Album was released in 1969 and issued in the US only and then quickly withdrawn. This release is remastered and includes 2 other songs recorded during that weekend in April 1969 plus alternate takes recorded on different nights.
-
The little lady with the big voice is captured here at the legendary PJ's Club in 1969.The original album release on Liberty consisted of only 8 tracks, was issued in the US only, and coupled with some studio material on side two, then quickly withdrawn. RPM present the LIVE half of the album, released for the first time in Europe, and reissued for the first time anywhere, now digitally remastered and enhanced by the reinstatement of the two other songs recorded across that weekend in April '69. Bonus tracks have also been added in the form of alternate takes recorded on different nights, of three of the songs, all recently mixed down from the original 1" mutli-track masters. The sound is very soulful, Timi is backed by a tight Stax sounding house band, and she performs wills her customary passions. ALL TRACKS RECORDED LIVE AT THE PJ'S CLUB, APRIL 1969

BY 1969 TIMI YURO was at a professional  crossroads, hitless in over four years and unsure which musical direction to pursue. Furthermore, she was by now also at something of a personal crossroads, shortly about to get married and enter into a period of semi-retirement. And yet with all this as a backdrop she went out and cut one of the most powerful LP's of her career - although ironically, the album was destined to remain unissued for over thirty years (this actually represents its first 'full' release).
The previous year, following a three-year spell with Mercury Records which had proved both commercially and artistically disappointing, she'd returned to Liberty Records in a bid to get her recording career back on track. But although they'd been desperately keen to re-sign Timi, Liberty had no more idea what to do with her than they'd had four years earlier - which was essentially why she'd left them the first time around. Her 1968 LP Something Bad On My Mind (which span off a much-vaunted UK Northern Soul collectors' item, a fine revival of Baby Washington's It'll Never Be Over For Me) had presented an entirely new, up-to-date Timi Yuro -she even looked totally different, what with her Mary Quant hairjob and boyish fringe. But despite encouraging reviews, Something Bad... bad done considerably better in the UK and Europe than it had in the US - and yet ironically, it had been a superb set, arguably Timi's strongest album, wholly contemporaneous at the time of its release, evincing a wholly Soulful feel which many of her earlier albums had failed to achieve.

But oddly enough, despite Trini's spectacular singalong successes few other artists had recorded there since, which might go some way towards explaining why Timi's Live album was fraught with technical problems.
For when we asked Timi about the project she was largely dismissive of it, commenting that ultimately, she'd been glad the record company had cancelled its release. She recalled that the LP had been recorded in less than ideal conditions, using what she described as 'inferior' recording equipment - in particular, she felt that the gig had been poorly mic'd - and they'd suffered endless technical hitches. There had been a major equipment failure on the first night, which was repeated when they tried to 'save' the project the following night using different recording equipment. And to top it all off, she'd not worked with the PJ's house band previously.
i in the beginning

Subsequently, in an endeavour to present Timi in an even more contemporary context, Liberty decided that she should record a Live album. It seems the thinking behind this was that it would cover all bases: it would demonstrate her ease with finger-clicking supper-club material, thus appealing to the MOR audience; ditto Soul material, which with she'd always evinced a strong affinity; and it would also feature a couple of her old hits, as a nod to her long-term fans.

Nonetheless in the final analysis three nights were recorded, and after hours of editing and mixing, the following tracklisting eventually emerged:A Place In The Sun; For Once In My Lie/Stand By Your Man; Make The World Go Away; Loving You/Something's Wrong With My Baby; Bang Bang; What's A Matter Baby/Why Am I Treated So Bad; A Place In The Sun. However, although it was mastered, allocated a catalogue number (Liberty LST 7627) and scheduled for release (August '69), Timi Yuro Live At PJ's was withdrawn at the last minute (NB: around half the tracks would later appear on an off-the-wall 1976 release The Timi Yuro Album (United Artists UA LA631-G) which was issued only in South America and Europe (ex-UK). An oddball collection of old tracks and previously-unissued material, it featured six sides from the ill-fated Live At PJ's set, viz: A Place In The Sun; For Once In My Life/Stand By Your Man; Make The World Go Away; Bang Bang and Hurti.
Timi had recently moved to the West Coast to live, and so the decision was made to cut the album locally. PJ's, on Santa Monica Blvd, doubtless seemed the logical venue. One of LA's most prestigious, well-established nice-spots, it had been popularised via a pair of massive-selling early 60's LP's Trini Lopez At PJ's (a million-selling album) and More Trini Lopez At PJ's.
Over the years a handful of white label promo copies of Live At PJ's have turned up, but these are real collectors' items, rarer than hens' teeth. This, then, marks its first-ever release, and the set is expanded and enhanced via the inclusion of a number of bonus tracks, plus more of Timi's onstage banter.
All too often, artistes are over-critical of their own work, and Timi is no exception - for as you can hear, Live At PJ's nowhere near the disaster which she described. And despite any shortcomings, it stands as a superb testimony to the power of her live performance at that time. From the emcee's introductory announcement,

"Ladies and gentlemen, PJ's proudly presents, one little lady, one kinda Soul...", Timi cuts through all the problems and technical difficulties. She's in fine voice and clearly in control, overriding all the shortcomings and primitive recording conditions - although certainly, it must be said, in places the sound varies and the vocal back-up group occasionally sound fairly workmanlike, coming over at times like they're simply going through the motions. But the house band - whom Timi introduces as The Folk - are a slick, well-drilled outfit, particularly at home on the more soulful material. And what is perhaps more interesting is that Timi actually seems rather more at ease with the material which isn't traditionally associated with her (her versions of both Hurt and Make The World Go Away sound, at times, perfunctory).

To kick the show off we have one of the 'bonus' tracks, the house band loosening up with a fine, punchy instro workout of the old Mel Torme hit Comin' Home Baby, following which Timi joins them onstage and proceeds to get her teeth into Stevie Wonder's A Place In The Sun. An ideal vehicle for Timi, it suits her voice perfectly: she imbues it with a soulful, 'black' feel, which serves to override the supper club-styled arrangement.

would record with Willie Mitchell some ten years hence. Again, it's a tremendous showcase for the soulful side of Timi.
A further change of mood and tempo follows in the shape of a stark, chilling arrangement of Cher's Bang Bang, which owes little to the original. Stripped-down and bare, with none of the lilting, gypsy rhythms of the hit version, Timi instead infuses the song with a foreboding aura of pathos and tragedy.

Although - despite her rather overtly gung-ho spoken intro - she must have been fairly sick of singing Hurt by now she gamefully goes for it, in the face of some jarringly off-key intrusions from her vocal back-up singers. A straight reading, Timi sticks close to her original single arrangement - although the 11111 version of What's A Matter Baby which follows presents yet another total change of mood. A lastish, soulful arrangement, suitably gotta-gotta'd up by the crisp backing (brass, organ), it's simply magnificent and another facinating insight into the soulful side of Timi. Keeping up the pressure she unexpectedly segues into the Sweet Inspirations' 1967 R&B hit Why (Am I Treated So Bad?): a great Soul shouter, with its changes in tempo, this proves to be yet another superb vehicle for Timi.

Exactly the same can be said of her next number, that year's most recorded song, For Once In My Life, a number originally recorded by Tony Bennett but more usually associated with Stevie Wonder. However, it suddenly segues into a soulful, powerful, upbeat arrangement of Tammy Wynette's Stand By Your Man -bringing to mind Timi's own 1963 Country/Soul classic Make The World Go Away -which is so good it leaves you gagging for more.

In which case it seems wholly appropriate that her next number should actually be Make The World Go Away: Timi belts out a really heartfelt version which unfortunately seems to lose its way a little towards the second half. However, she soon recaptures both mood and impetus with a superb, chugging arrangement of Otis Redding's I've Been Loving You Too Long (featuring some great brass and keyboards). Once again, the material suits her down to the ground: an absolutely stunning version of a great song, it proves just how great a Soul singer Timi could have become, had she chosen to concentrate on the genre. Staying in a StaxNolt-oriented vein, an abrupt change of pace ensues as she segues neatly into a burning arrangement of Sam & Dave's When Something Is 'Wong With My Baby, the number she

This is followed by some amusing non-pc dialogue - "ti you're Jewish and Italian, you've gotta be confused!" - and an equally non-pc, witty anecdote before Timi swings into the excellent reprise ofA Place In The Sun which the original album went out on. However, we have further bonus tracks, kicking off (unfortunately) with a turgid, wholly unnecessary version of the dreaded Yesterday, which briefly segues into a snatch of I Believe in its final death throes before mercifully drawing to a close (no wonder they weren't going to include this on the original album!). But fortuitously, the alternate takes of A Place In The Sun, For Once In My Life, Stand By Me and I've Been Loving You Too Long more than compensate for it. These were recorded on different nights to the 'mastered' versions and therefore sound different instrumentally, with the guitar rather more audible.
Roger Dopson/Jay Jones with special thanks to Timi Yuro, and acknowledgments to Chris Arnold 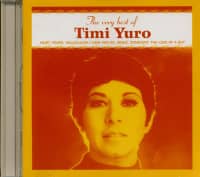 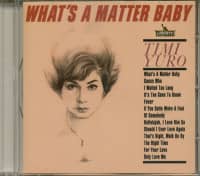 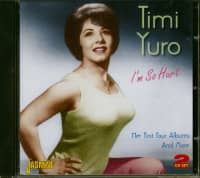 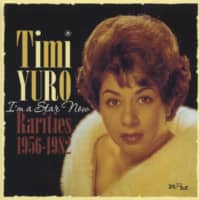