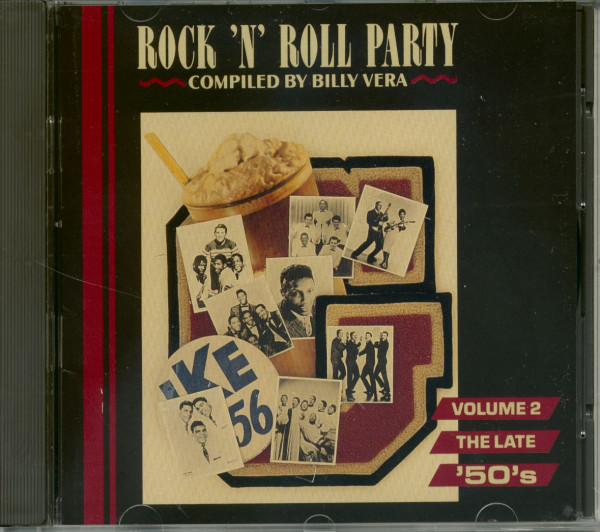 Rock &, Roll Party - The Late 50s - Vol. 2 (CD)
Compiled by Billy Vera
The late nineteen fifties are generally considered to be Rock 'n' Roll's Golden Age, that first exuberant explosion whose reverberations still ripple through today's airwaves. It was the result of an array of disparate elements noisily colliding, the decline of staid, corny Tin Pan Alley. the vitality released in the newly mobile and newly visible black community, and the infectious attraction their music had for white musi-cians and listeners. The final, crucial factor was a huge teenage audience beginningtoflex its economic muscle.

It didn't take long for Tin Pan Alley to regroup and begin to co-opt the new music that was catchingAmerica's young ears. They recycled it through the jaded sensibilities of oppor-tunists who cared not a lick for it except how it could line their pockets. But between roughlythe middle of 1955 and the middle of 1957 this new hybrid Rhythm and Blues called Rock 'n' Roll glistened with the sharp cool of a crease in a pair of brand-new sharkskin pants. It was truly a Golden Age.

RCA Victor came in on the ground floor with the astute signing of Elvis Presley by A&,R man Steve Sholes. As the first volume in th is series amply demonstrates, RCA had been part of the foundation as well. The label and its subsidiaries, Groove and VIK. recorded a wide range of superb R&,B. Its lack of success relative to that of the independent R&,B labels had much more to do with an unfocused field force than the quality of the music. In those days, RCA's distribution system not only handled Pop, Classical. Country, Polka and R&,B music but also home appliances and their spare parts as well! So. what we have here is wonderful music. performed and produced with loving care. that was marketed at the time it was made by people who did not care very much.

In the RCA Records vaults, we found the tapes well stored and well catalogued. In most cases the tracks were digitally transferred from original sources, and since RCA Records' studios always boasted state-of-the-art equipment. the sound quality is uniformly good. Now. crank up that box for music from Rock 'n' Roll's magical moment when, full of juice and swagger, it was suspended between innocence and exploitation Of the great and near-great performers here. some went on to further success. some saw their time drawing to a close. while for some others. these three minutes began and ended their time in the spotlight's joyous burn.
—Billy Vera February, 1989
,