Pour en savoir plus sur Charlie Rich
CHARLIE RICH If ever a musician deserved attention for more than his hit records, it was... plus
Fermer menu
"Charlie Rich" 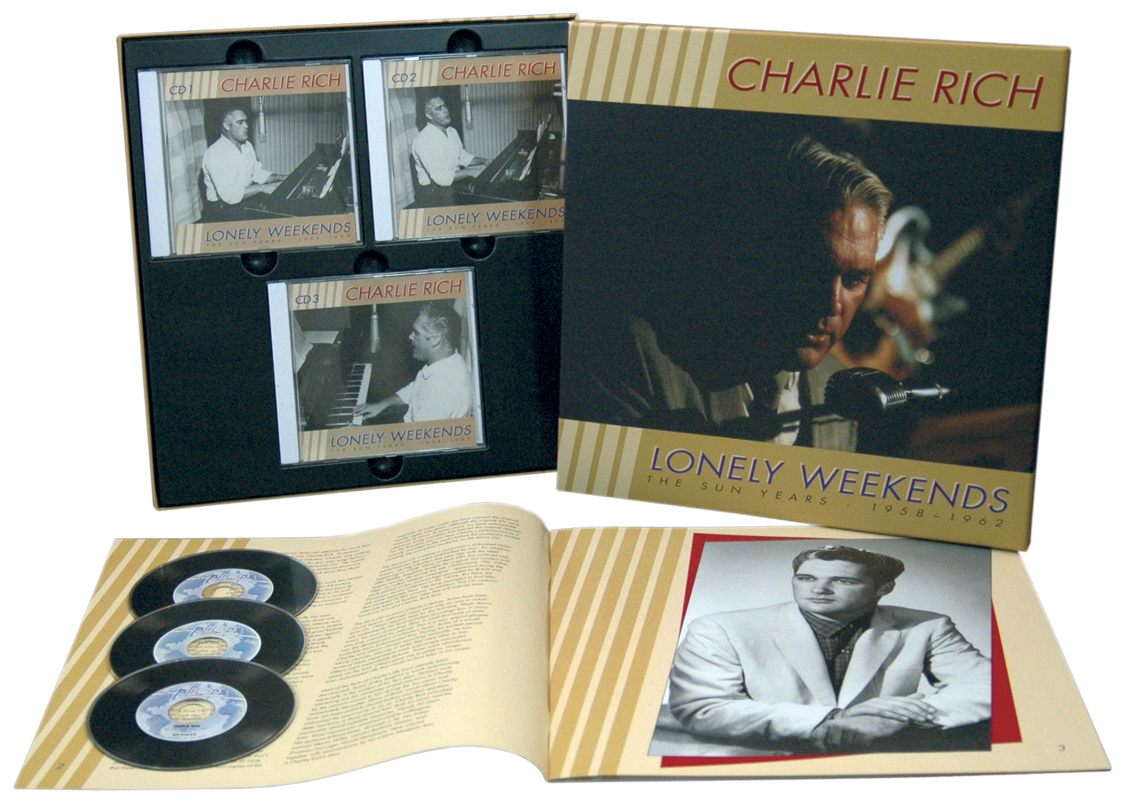 If ever a musician deserved attention for more than his hit records, it was Charlie Rich. To several generations of casual listeners, Charlie was nothing more than the ‘Silver Fox’: the guy who sang Behind Closed Doors and The Most Beautiful Girl. The tunnel vision of pop culture has done a profound disservice to Charlie Rich. He was much, much more than those records.

Even listeners who remember his earlier work like Mohair Sam and Lonely Weekends rarely see the full picture. Charlie Rich was a true original in a field that pays lip service to originality but doesn't know what to do with it. An irrepressible eclectic in a field that is enslaved to musical categories. A singer/songwriter/musician in a field that prefers you to be just one thing so everyone else can earn a living.

Worse yet, Charlie Rich was a profoundly shy man with virtually no desire for stardom. He was thrust into a spotlight he feared and distrusted. A quiet, intense man pushed nearly beyond the limits of his endurance to severe substance abuse. A performer so talented and good looking that nobody could stand to leave him alone. A press agent's dream and a promoter's nightmare. Charlie was a gentle giant who would rather spend quiet time with his family and play anonymous gigs in smoky clubs than endure the scrutiny and demands of a hit record and a concert tour.

Charlie Rich began a career that spanned more than three decades at the legendary Sun label in Memphis, recording for Sam Phillips. Without question, Rich's earliest work is his most interesting. It is also the rawest, least disciplined and most revealing. Rich was never more prolific as a songwriter than during his formative years at Sun. There is nothing in his later career that wasn't foreshadowed in some manner at Sun. Unfortunately, however, there is much in these earliest recordings that was lost or remained undeveloped in Rich's later work.

Never before have Charlie Rich's Sun recordings been examined in such depth. Most reissues have taken a Greatest Hits approach, focussing on Lonely Weekends and half a dozen single releases and cuts from his lone Sun LP. In fact, Charlie's catalogue is much deeper. He recorded over a hundred titles for Sun. Many were carefully produced masters; others were rough publishing demos. Almost all were compelling.

We have divided Charlie's music into three categories. The first CD presents every title originally issued on the Phillips International label as a single or on an LP. Note that these tracks are not necessarily carbon copies of the originals. In some cases, we have remixed the original master tapes into stereo, although the original 45s were reduced to mono. In some cases, we have removed the choral or string overdubs that marred the original releases. For the first time you can hear Charlie's performance as it actually sounded in the studio before the producers started painting the proverbial mustache on the Mona Lisa. The second CD contains a combination of finished studio performances that were overlooked by Sun - for whatever reason - during Charlie's five year stay with the label beginning in 1958. Many of these titles first surfaced only after Shelby Singleton bought the original Sun masters and began issuing LPs during the late 1960s/early '70s. Other titles - so called ‘deeper catalogue’ - appeared during the peak period of Sun archaeology prompted by British and European record collectors in the 1970s. But there are still some surprises here. We have managed to find titles that escaped all this scrutiny. In addition, this CD contains alternate takes of familiar titles that will surprise even hardcore Sun and Charlie Rich fans.

The third CD contains Charlie's demos. Some have been issued before, although many exist only on rare or out-of-print LPs. Others appear here for the first time. These demos are undoubtedly the least polished recordings but, in many ways, his most rewarding. Bear in mind that none of them was ever intended for release. This is a very special glimpse into the development of Charlie's music. Some of it would probably have embarrassed him. During his earliest period Charlie was almost always searching musically. He was taking chances, playing in styles that were alien to him. Some of these experiments were surprisingly successful. Others were expendable failures. Some were abandoned, nearly on the spot. Others gave rise to patterns, songs, even instrumental riffs that would surface later in his career.

Most of the facts of Charlie's life have already been documented. Some of this material is worth re-examining, especially in the context of his Sun days. Perhaps most interesting are the memories of and reactions to Charlie by the persons closest to him during the Sun years and immediately thereafter. Many of these words about Charlie have not been publicly shared before and their speakers welcomed the opportunity to do so. Charlie Rich provoked deep reactions in those around him. Both his music and his personality stirred indelible memories. Nearly 40 years later, these impressions remained vivid to colleagues like guitarist Roland Janes, drummer J. M. Van Eaton, saxman Martin Willis, vocalist Barbara Pittman, and drummer/manager Harold Murchison. Here, pieced together with reminiscences by his widow Margaret Ann, is Charlie Rich's story.

Despite his affinity for the blues, it would be sheer fantasy to claim that Charlie Rich grew up dirt poor in the rural South, scuffling for his next meal or a warm bed to sleep in. Such tales of rural poverty may not be far removed from the lives of Carl Perkins and Elvis Presley, but they bear little similarity to Rich's background. Rich was born on December 16, 1932 in Forrest City, Arkansas. There probably weren't many affluent people living in Forrest City during the Great Depression, so the Riches' economic circumstances were hardly exceptional. By the 1940s, the family's finances had stabilized and they settled in Colt, Arkansas (population 312).