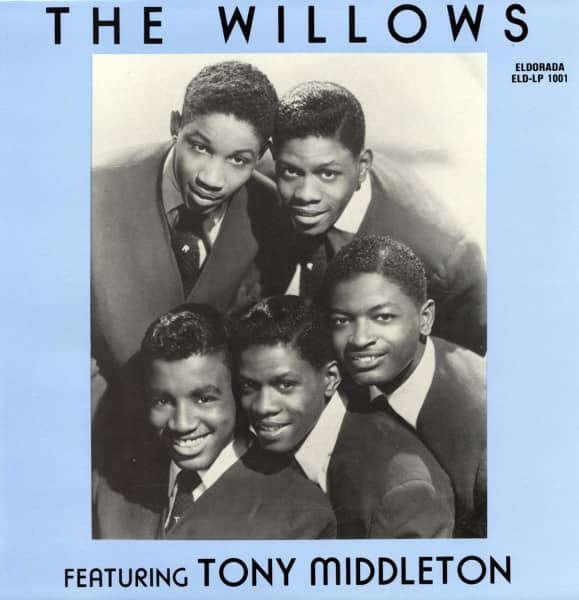 (El Dorado) 19 tracks
-
The Willows are mostly remembered as one of the countless 'one-hit-wonders' for their only hit CHURCH BELLS MAY RING.which was also covered by the DIAMONDS. Very few people have recognized that lead singer TONY MIDDLETON released many solo recordings in the years fol-lowing his stay with the group before he decided to become an actor-and so he appeared in the 1971 Broadway production of 'PURLIE' (toge-ther with Ray Pollard of The Wanderers and Milton Grayson of The Dominoes).

The Story of The WILLOWS goes back to 114th Street in Harlem,where Tony (born June 26,1934) in Richmond.Virgin) lived in 1952. He received an invitation to Mrs. Clarisse Martin's house on 115th Street while he was training his boxing at a local gym. Mrs.Martin's twin sons, Joe and Ralph,were rehearshing under her guidance with John Thomas 'Scooter' Steele (bass),Richie Davis (1. tenor) and Bobby Robinson to be kept off the streets. Being very impressed by Tony's fancy footwork and choreography in the ring she knew for sure that the chance to archive some success with this guy in the group would be great - if she could teach them assiduity and discipline. Having been the main impulse behind the recording career of THE WILLOWS from 1952 to 1965. she let them practise every day. So you could find the group singing at the corner of 115th and Lenox Ave. in hospitals.at church benefits and at dances at the Chelsea Vocational High School. While still known as 'The Dovers', they sometimes used Doc Green as additional singer. One of Green's favourite songs was 'The Whiffenpoof Song' by the Cabineers, and so the group decided to try their luck with the same company the Cabineers had recorded for. Abbey Records under the management of Pete & Goldie Durain had meanwhile moved and changed its name to Allen Records.

The first release for Allen under the name of THE FIVE WILLOWS was the streetsong MY DEAR,DEAREST DARLING, introducing for the first time the famous bass intro by 'SCOOTER' Steele to the public. This gimmick was carefully planned to be their trademark, later reviewed in LITTLE DARLIN' and DO YOU LOVE ME. Billboard magazine called this release in June 'kinda weird and somewhat hypnotic', and so you can hear the group sometimes out of key, while the flipside ROCK LITTLE FRANCIS (the obligary jump) sounds amateurish, but nevertheless interesting. The 1953 formation had recorded without Doc Green (who later joined The Five Crowns.transforming into a Drifters group) and Bobby Robinson (who had already started his Red Robin Label and later owned various companies). Tony was also featured as lead on THE WHITE CLIFFS OF DOVER. while he shared the vocals with Richie on DOLORES - the latter coupled with ALL NIGHT LONG on their second Allen release in September. At the end of 1953, their third Allen record was out, but again no chart entries were noted for WITH THESE HANDS (lead by Richie). When Pete Durain decided to part business with Mr. Allen, The WILLOWS went with him and recorded their next release for Pee Dee Records in early 1954. entitled LOVE BELLS c/w PLEASE BABY. Pete Durain himself went out of business in 1954. but the group was able to record four sides for Herald (found on the Relic albums 5015 & 5047) - in the same style, but again without success.

When Tony met Morty Craft in 1955, who had just left his partners at London Records to form his own Melba label. a chance to record again was in sight. The WILLOWS (as they were known now, just dropping the 'Five') offered him a ballad entitled CHURCH BELLS MAY RING, which was written by Tony from an idea of his wife Betty. When first released as CHURCH BELLS ARE RINGING (mislabeled on early copies),it had transfor-med into a wonderful rocking tune with a now famous bass bridge ('Hello hello again.my friend. I'm hopin'that we'll meet again'), close harmony-and as a gimmick chimes (played by the still unknown Neil Sedaka from a suggestion by Morty Craft) plus a shuffle rhythm. Hitting the r & b charts on April 18,1956. the song reached no. 11 and stayed for 2 weeks,but it had more success before on the pop charts,first appearing at no. 74 on March 28, then climbing to the middle of the Top 100 listing. Soon cover versions by The Cadets, Sunny Gale and The Diamonds fol-lowed, and The Diamonds'version nearly outsold The WILLOWS'original on all main markets.

The same story happened again, and so the guys didn't get paid more then S 200 for their million seller, even after they took Morty Craft to court, where he declared bankruptcy then. Ironically, the bass bridge at the hitsong was sung by Richard 'Rico' Simon, a neighborhood friend just substituted for 'Scooter' Steele for that session only. Two more records on Melba followed in late 1956/ early 1957, but no follow-up gave THE WILLOWS the succes the sure had exspected. Especially LITTLE DARLIN' was in the same vain as CHURCH BELLS MAY RING, while MY ANGEL was one of the earliest writing affords of Neil Sedaka and his school pal Howard Greenfield. All Melba recordings (listen to DO YOU LOVE ME) featured the bass rifling of Freddie Donovan, because 'Scooter' permanently missed rehearsals, and Tony had to let him go.

When they left Melba through the help of attorney Aber Greenberg, who had sued Morty Craft for the missing royalties and got their release, they turned the contract over to Carl Edelson,who had his office of Club Records in the same building (1650 Broadway) as their attorney (and Melba Records, too). Four songs were recorded at a September 19,1956 session, but only two were released (see Relic LP 5022) in November on Club.while 'Frantically' stays in the can (Edelson later re-released the Club record on his Michelle label in 1963). Eldorado Records, owned by Buchanan and Goodman(of 'Flying Saucers' fame) was their next stop in early 1957 (also located 1650 Broadway), and a big band style recording was released in April - THE FIRST TASTE OF LOVE c/w ONLY MY HEART. They eventually went to Mercury. recording two songs with piano backing by Fats Domino, which were their best tracks according to Richie, Joe and Ralph (the Mercury masterfiles don't list any recordings by these WILLOWS, so this informations is eventually wrong.)

When Richie went into the service in 1985, The WILLOWS continued without him, although two very good songs were released on Gone Records at the end of 1957. With a little bit of promotion, LET'S FALL IN LOVE (backed with SAY YEAH) could have been a hit for the group. Richie recorded two (still unreleased) songs in Detroit with a different backing group (including Tony), before Tony himself decided to quit the group. The re-maining members (plus Richie) backed a guy named Bobby Holiday on 'Tiajuana' & 'My Letter', while the Martin twins, Freddie Donovan. Jo-e's wife Dotty and another singer once again did a session for Morty Craft, from which MY DEAR,DEAREST DARLING and YOU (a different version of 'CHURCH BELLS MY RING' is still unreleased) with lead vocals by Dotty were released on a Warwick LP.

Under the guidance of Mrs. Martin. the group stayed together until 1965, having released their last two records for Heidi (an Atco subsidiary) in 1964. Richie sang lead on 'SUCH A SHAME' and 'SIT BY THE FIRE' while the latter featured once again Freddie's bass vocals. Tony Middleton has done countless solo recording since then and is still active in the music field and as an actor. So he was nominated in 1972 for a Grammy Award for his recording of 'Don't Ever Leave Me.'

The WILLOWS sure made some impressions on music lovers with Middleton's lead, the bass intros, the fast beat of their records and the proba-bly first use of chimes on a rock'n'roll record in
Church Bells May Ring but the real impact was on the youth of the local neighborhood of 114th/ 115th Street, where later The Bopchords, Channels and Ladders emerged from.

Pour en savoir plus sur The Willows
The Willows Church Bells May Ring Harlem was teeming with young groups. The Five Willows... plus
Fermer menu
"The Willows"

Last in was Paul's replacement, tenor Tony Wright, born June 26, 1934 in Richmond, Virginia, who later changed his surname to Middleton. Inspired by the tree of the same name, the group changed its handle to The 5 Willows in 1952. They solicited Peter Doraine's Abbey label. By the time he got around to recording them a year later on their originals My Dear, Dearest Darling (led by Tony) and Rock Little Francis with saxist Don Archer's band, Doraine was working for Allen, owned by Victor Allen, who was in the moving van business.

The quintet encored on Allen with Dolores b/w All Night Long and then a pair of standards, The White Cliffs Of Dover (long a group favorite) b/w a Davis-led With These Hands. Next was a '54 single for Doraine's Pee Dee logo, twinning the Allen masters Love Bells and Please Baby. Singer Mayme Watts and saxist George Kelly wrote the quintet's first Herald single, Lay Your Head On My Shoulder, in 1954 (backed with Baby, Come A Little Closer). Charlie Singleton and Rose Marie McCoy collaborated on both sides of their Herald encore, Look Me In The Eyes b/w So Help Me, that same year. Herald put the "5" in quotes, like The "5" Royales.

The Willows jettisoned the "5" at Morty Craft and Ray Maxwell's Melba Records. Their first outing on Melba in early '56, the rollicking Church Bells May Ring (listed on early pressings as Church Bells Are Ringing), was penned by the group and Craft. Steele had left town, so The Willows recruited Richard Simon to sing bass on the song; 16-year-old Neil Sedaka was overdubbed on chimes. For the flip, Baby Tell Me, new permanent bass Freddy Donovan got his first shot. Church Bells May Ring was a #11 entry on 'Billboard's R&B 'Best Seller' charts. Its #62 pop showing was dimmed by a Diamonds cover on Mercury that zipped up to #14 on that chart. Do You Love Me, The Willows' Melba encore, rocked even harder (My Angel, penned by Sedaka and Howard Greenfield, adorned the flip). Little Darling was their Melba swansong; it came out after the quintet had left the label over a lack of royalties.

The Willows paused at Carl Edelson's Club Records to wax This Is The End b/w the blazing Don't Pull, Don't Push, Don't Shove near the end of '56. Middleton received featured billing on The Willows' '57 singles for Bill Buchanan and Dickie Goodman's El Dorado label (a very poppish The First Taste Of Love) and George Goldner's Gone (a blistering rendition of Harold Arlen and Ted Koehler's Let's Fall In Love).

Middleton had cut his first solo single for Saxony in 1956. After Let's Fall In Love, he was indeed gone, his solo career seeing releases on Triumph, Big Top, Alto, Roulette, United Artists, Philips, ABC-Paramount, Kapp, Mala, A&M, and more. The Willows carried on, the Martins joined by Joe's wife Dotty to remake My Dear, Dearest Darling for Craft's Warwick label in '59 and cut two singles for Heidi in 1964. Donovan was felled by cancer on May 17, 1986. Ralph Martin died March 25, 2010 in the Bronx of colon cancer, and his twin Joe passed away five years earlier. 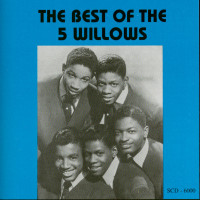