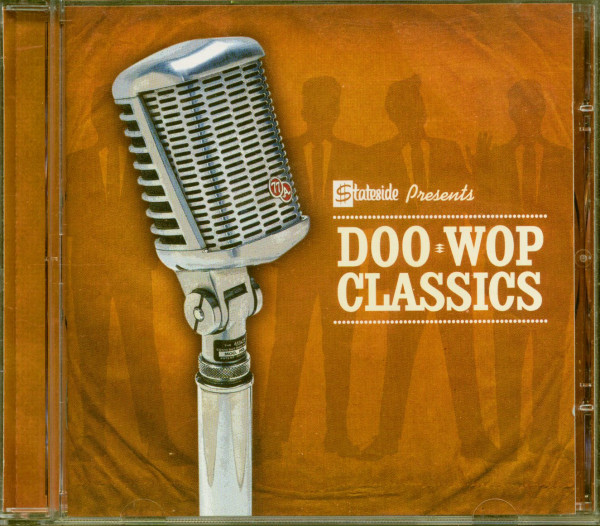 (2007/Stateside) 30 Tracks - Original recordings from 1951-1961 - A decade of doo-woppin'! ,The 12 page booklet contains short group biographies!
,-
HARMONY SINGING BY BLACK VOCAL GROUPS HAD BEEN DEVELOPING SINCE THE MID 19TH CENTURY AND THE ROOTS OF WHAT WE CONSIDER TOO WOP' TODAY APPEARED IN THE 1930'S WITH THE HUGE POPULARITY OF THE INK SPOTS AND THE MILLS BROTHERS. THESE TWO GROUPS WHO APPEALED EQUALLY TO BOTH BLACK AND WHITE AUDIENCES INFLUENCED HUNDREDS MORE TO FOLLOW IN THEIR WAKE. THE EASE WITH WHICH GROUPS COULD GET WORK ON LIVE RADIO SHOWS FUELLED THE POPULARITY OF THE GENRE AND BY THE LATE 1940'S GROUPS WERE BEGINNING TO DEVELOP WHO APPEALED MAINLY TO TEENAGERS.
,-
The first of these groups to make a national impact were The Orioles from Baltimore who were signed to New York's independent Jubilee label. Jerry Blaine owned Jubilee, an entrepreneur who also owned a major distribution company inspired other independent label owners to exploit the new sub genre of harmony singing. Most of the early fifties stars of doo wop were promoted by independent labels like Atlantic, Herald, Rama, End, Gone, Gee, Red Robin, Glory, Old Town, Paradise, Hull, Harlem (New York) Checker, States, Parrot, Mercury, Vee Jay (Chicago), Fortune (Detroit), Aladdin, Imperial, Capitol (Los Angeles), King, Federal (Cincinnati) and scores of even smaller companies across America.
,-
By 1955 the music was becoming acceptable to the pop market thanks to the growing popularity of rock and roll and the teenage market. In addition to the regular R&,B hits they scored these labels and artists were also lucky to occasionally get a pop chart entry. Many pop artists began to cover R&,B and doo wop tunes and as most label owners also owned publishing on their releases this was a lucrative situation for the companies, if not the artists. As it progressed through to its natural conclusion in the early sixties the genre was embraced by Italian youth and Hispanic youth on both coasts. The popularity of vocal groups continued to rise during the late fifties but then began to lose ground before re-emerging as a cult collector's scene especially in the New York area around 1961. So huge was this new movement that many of the records featured here began to attract huge prices for original copies. Records were reissued and groups came out of retirement to be more successful than they were originally.
,-
The source of much of this material came from Roulette Records, a label formed in the mid-Fifties by Morris Levy. Over years Morris Levy specialised in purchasing labels especially those owned by his buddy, George Goldner, an inveterate and hopelessly bad gambler but a genius at producing music especially in the mid fifties vocal groups. Levy soon built up one of the largest tape libraries of doo wop in America by acquiring Jubilee, Josie, End, Gone, Rama, Gee, Hull and many more. When purchased by EMI the Roulette family joined such labels as Capitol, United Artists, Aladdin, Laurie and Imperial all of whom had recorded substantial quantities of doo wop giving the company the largest cache of this music. (Bob Fisher 2006)