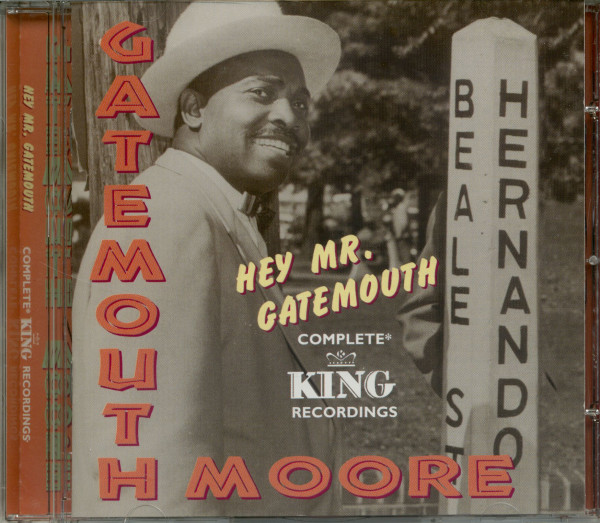 'I am one of the ultra-men blues singers,' the Rev. Dwight Moore told Mike Streissguth. 'I am not accustomed and don't know nothing about that gut-belly stuff in the joints ... I put on tuxedos, dressed up, sang intelligent and tried to give voice instead of singing.' It's arguable whether his fans knew the difference. He'd previously been interviewed by Johnny Otis: 'Without a doubt, and I'm not being facetious, I'm the best blues singer in the business with that singing voice. Now I can't wiggle and I can't dance, but telling a story, I don't think them other boys are in my class.' That's the sort of thing you'd expect from the man who trod the boards as Gatemouth Moore and there's no law against self-esteem. As far as he was concerned. clear enunciation and a respect for the ladies were the guarantees of professional success. And then God intervened and his skills were recruited for a higher purpose. But we're getting ahead of ourselves. Religion was a constant subtext in the Moore family. In fact, his father (whose name he never learned) left his mother Georgia six months before little Arnold Dwight was born, accusing her of being too damn religious. The birth took place on November 8, 1913 in Topeka, Kansas. Appropriately, Georgia came to term during a service and Arnold was born in the wagon carrying her from the church. Later, when the boy asked his mother who his father was, she replied, 'Your daddy's name is Jesus'. That caused a few fights in the schoolyard when the subject of parents was broached. Georgia Moore worked for the white and wealthy Spaulding family, Arnold and his two sisters were raised in the house. He didn't realise he was black until he went to school in Mudtown.

By the time he was nine, he was already winning amateur singing contests as a boy soprano, with a repertoire that included 'Trees', 'When Irish Eyes Are Smiling' and 'My Yiddisher Mama'. The Spauldings got him on station WIBW in Topeka and booked appearances for him throughout Kansas and Nebraska. 'Until I got ready to run away from home,' he told Peter Lee and David Nelson, 'my singing was controlled by the Spauldings.' He was seventeen when he sang in a Kansas City hotel across the street from the Cherry Blossom Club, to which the hotel manager subsequently escorted him. 'I sang that night. And the band was fabulous. The bandleader was named Bennie Moten. The relief player when Bennie Moten got drunk was Count Basie.' Then it was back to Topeka, where he'd formed a quartet called the Four Sharps with Orville Cox, Jimmy McGary and Earl Burch. When Topeka held its 1930 state fair, a visiting troupe, the Beckman and Garrity Carnival, hired the Four Sharps for a tour that took in Tennessee, Mississippi, Louisiana and Texas. In the course of the next few years, Arnold worked with Porkchop Chapman's Show, Sammie Green's Down In Dixie Minstrels, Sam Dale's Circus and Ida Cox's Darktown Scandals, often taking the role of the interlocutor. '(Ida Cox) liked the way I talked,' he said later, 'my enunciation. I could do the job for her, and I dressed pretty decently. She was kind of proud of me. I carried myself.' The Darktown Scandals were playing the 81 Club in Atlanta, Georgia when he acquired his professional name. 'I was singing 'Stardust' and there was a little black woman, short, fat, coming down the aisle, rocking with me as I'm singing.

I opened my mouth and she looked up and hollered,' Ah, sing it you gatemouth son of a bitch'. The drummer fell off the drums. It broke up the show. 'So I walk off - I'm mad. Gonna quit the show.' The manager accosted him and asked what he made for a week's work. On being told nine dollars, he offered the abashed singer $25 if he'd agree to do a midnight show billed as Gatemouth Moore. 'The next day I was on the street, man, a cow bell rings. Here comes a horse with a straw hat on and a big bell. Great big sign with a mouth - nothing but a mouth. 'Gatemouth - Midnight show.' You couldn't get through the streets that Saturday night to see Gatemouth.' After a short time with the F.S.Wallcot Rabbit Foot Minstrels, the Four Sharps were left stranded in Clarksdale, Ms. Arnold made for Memphis, where he earned his school diploma and sang at the Elks Club and the Morocco. In the summer of 1939 he joined Walter Barnes and His Royal Creoles on a tour which took them from Chicago to Washington and New Orleans. He was still with the band the night of April 23, 1940, when they played the Rhythm Club in Natchez, Ms. As luck would have it, he was in the tour bus with a willing female when the club, an old garage made of corrugated steel, went up in flames.

Only Art Edwards and Oscar Brown, the bass player and drummer, escaped while some 200 people lost their lives. With awful irony, his own 'survival' brought him instant publicity. Gatemouth returned to Memphis and joined the Doug Jenkins band. Drummer Andrew Jackson also sang blues with the band and it was through watching him that Gatemouth came to appreciate it as a music form - and a money earner. 'I didn't sing blues with the band ... I had the voice but I couldn't eat with that. So I started singing those blues songs.' He was eventually replaced by the blind singer Al Hibbler, who had been stranded in Memphis with the Texas band, Boots And His Buddies.

In 1941 he went back to Kansas City to take up a residency at the Chez Paree, once the Cherry Blossom. The house band was the Carolina Cotton Pickers and in the following years, Gatemouth also went on tour with them. The club was owned by a Mrs Gilmore, the wife of the owner of the Kansas City Monarchs, a Negro League baseball team. Eventually, Mrs Gilmore decided to start her own label, modestly calling it Gilmore's Chez Paree; she cut Gatemouth with a band led by saxophonist Tommy Douglas. The four songs included the first versions of 'I Ain't Mad At You Pretty Baby' and 'Did You Ever Love A Woman', as well as 'Somebody's Got To Go' and 'Jumping At The Chez Paree'. 'Every song I ever recorded, I wrote them about experiences of my life,' he told Mike Streissguth. "Did You Ever Love A Woman' was the actual things I did with my first wife and children.

'I Ain't Mad At You': one of my musicians, he was a saxophone player (he drank a lot), and he and his wife had been fighting, and she took off her shoe and hit him in the head. It had him bleeding all over. The police arrived, and they were putting him in the wagon to carry him to jail, and he kept saying, 'Baby, I ain't mad at you'.' These records received limited distribution but Herb Abramson, head of a&r for National Records, persuaded Gatemouth to re-record them in Chicago. Backed by Dallas Bartley and his Small Town Boys, the session took place on May 10, 1945. He recorded another eight titles in New York City with Budd Johnson's Orchestra the following November. A final National session, with Tiny Grimes' Swingtet, was cut in New York in October 1946. Despite heavy promotion underwritten by Abramson, Gatemouth's records refused to sell.

After being dropped by National, he tried his luck at King Records. 'I was coming (to Cincinnati) to play a club called the Cotton Club on 9th and Mounds. (Syd Nathan's) place was out on Brewster Avenue, and he came out and heard me. He had me make a country record when I sang the blues there for him. It was called 'I'm A Fool To Care'.' Gatemouth cut three sessions between August and December 1947 for King, the first with a piano-led trio of Allen Smith, Willie Gaddy and Monty Morrison, augmented at the second by a small brass and reed section, and a twenty-title marathon (anticipating a recording ban) in Chicago with a septet that included pianist Simeon Hatch. 'I'm A Fool To Care', 'East Of The Sun' and to a lesser extent a remake of 'Christmas Blues' are examples of him 'giving voice', whereas 'Highway 61 Blues' is more solidly in the blues shouting mold he'd previously established. The latter approach dominated the next sessions, which gave more solo space to his accompanists.

The prolific December session is of a satisfyingly high quality, even though ten titles (unfortunately a reworking of 'Did You Ever Love A Woman' is missing from the tapes) have remained unissued until now. Ten of the titles from this final session, with six from the previous sessions, appeared on a King album that has since become a collector's item; a copy was sold at auction two years ago for the princely sum of $4,400. In January 1949, Gatemouth was playing the Club DeLisa with the Red Saunders band. On this night he'd won $700 in a crap game just before being called to the stage. 'I walked up there on the stage and they played my ...