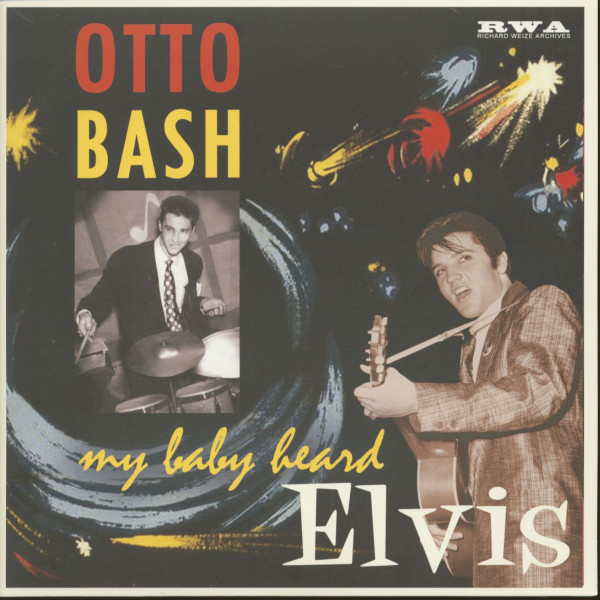 (2017/Richard Weize Archives) 10" LP - Gatefold Sleeve - 13 tracks - 29 min. - The Richard Weize Archives make available the recordings of Otto Bash, a Nashville based drummer and sometime vocalist. Bash was 29 years old, and it was the dawn of the rock ‘n’ roll era, when he briefly by chance stepped into the recording spotlight in 1955. This album offers a fascinating insight into the musically pivotal year, and the album offers a weird and wonderful mix of jazz, pop and rock, veering from cool to hot, square to hip, corny to cutting edge. If you can imagine a blend of Boyd Bennet, Tiny Bradshaw, and the jumping sound the combos of these artists made, then Otto Bash will be your cup of tea.

Pour en savoir plus sur Otto Bash
Otto Bash followed in his bandleading father’s footsteps, and neither of them wore cowboy... plus
Fermer menu
"Otto Bash"

Otto Bash followed in his bandleading father’s footsteps, and neither of them wore cowboy boots. Born May 10, 1926 in Nashville, Otto watched his drummer dad lead The Dixie Streamliners (honky-tonk pianist Del Wood was a member) and picked up the sticks too, joining the local musicians’ union when he was 16 and playing traps with Bob ‘Hamp’ Young. After a wartime stint in the Navy, Bash studied at Peabody College and rejoined Young’s outfit.

Bash made his singing debut on Springfield, Tennessee-based Hidus Records in 1955 with a pair of R&B numbers: a cover of Chicago blues harpist Little Walter’s then-current smash My Babe and The King Cole Trio’s jazzy swinger Straighten Up And Fly Right. Bash’s primary gig from 1954 on was playing drums with pianist ‘Poppa’ John Gordy’s well-established Dixielanders, a sophisticated outfit that regularly held court at the Celtic Room in Nashville. Otto was in the studio with Gordy when Poppa John recorded for RCA, fronting his The Blue Sioux City Five in April of ’55, which led to Bash’s own Victor contract. His first session there as a leader in January of ‘56 sported more R&B content—a cover of Bobby Charles’ Later Alligator that was issued as his first RCA offering but quickly rendered moot by Bill Haley and His Comets’ smash version.

Bash returned to the studio that June to wax his own jumping Later and a clever The Elvis Blues, penned by Cy Coben. He dug into the ancient Cab Calloway strutter St. James Infirmary on November 3, 1956 with a stellar aggregation in tow: Chet Atkins on guitar, bassist Bob Moore, pianist Owen Bradley, saxist Dutch McMillin, and Buddy Harman on drums. The Dixieland influence shone through despite all that top-drawer country talent in one room. The jumping opposite side All I Can Do Is Cry was written by ‘Louisiana Hayride’ veteran Wayne Walker, who had cut it himself a few months before for ABC-Paramount.

After one more RCA platter pairing You’re Cool To Me Baby and Ready For Love, Bash wrapped up his esoteric recording career, continuing his Dixieland drumming activities around Music City into the ‘70s. He later worked for the local musicians’ union chasing down errant members until his 1997 retirement. Bash died in May of 2010 at the age of 84.