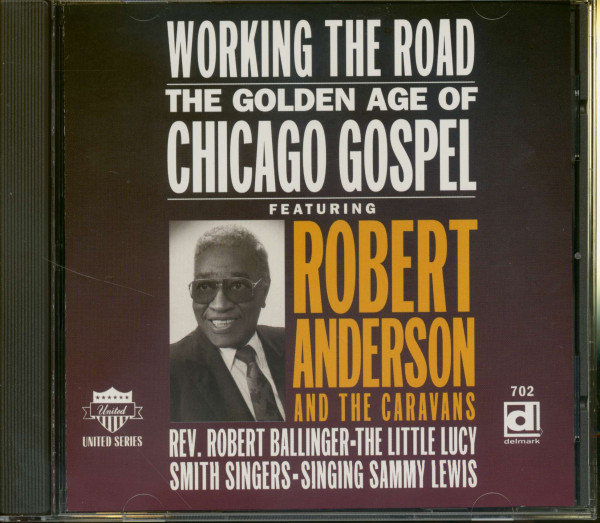 United's gospel catalog was lean but prime. During the '50s, Chicago was gospel's capital, its Vatican and Mecca, home turf of its pioneer exponents, Thomas A. Dorsey, Mahalia Jackson and Roberta Martin. By then the music had flourished for at least twenty years; it was old enough to possess its own conventions and stylistic traits, new enough to still sound fresh. The singers included on this CD were among Chicago's most innovative and eclectic. By 1951 Robert Anderson was Chicago's leading male soloist, easily Mahalia's equal in popularity or influence. Robert Ballinger's later recordings became minor hits and caused a sensation among lovers of blues piano. Lucy Smith also played piano; she spent several years accompanying the Martin Singers on records and James Cleveland derived his piano technique from her. Lucy's singing and lead vocalist Gladys Beamon Gregory's performances are a testament to the glory of Chicago gospel.

ROBERT ANDERSON By 1951 Robert Anderson was Chicago's ieading male soloist, easily Mahalia's equal in popularity or influence. Born in 1919, he began singing in church as a boy, and in the early 1930s was one of the first members of the Roberta Martin Singers. generally regarded as the premier gospel group. Martin herself had a master's degree in music, though she had worked her way through school playing in store-front churches (and movie theaters). She was a subdued vocalist. decidedly not a belter, but soulful enough to tear up congregations whenever she deigned to solo. Most times she relied on the young people. originally teen-aged boys, later men and women who comprised her group. She drove them on with magnificent piano accompaniment, both lyrical and propulsive, a stylized Baptist version of the sanctified technique identified with, say, Robert Ballinger. Among her early acolytes, Robert Anderson may have been the most talented; he was clearly the most ambitious.

By 1939 he had left her group and begun singing duets with R. L Knowles, a Kansas City native who had made his mark as the lead singer of Reverend Clarence Cobbs' First Church of Deliverance Radio Choir, the first ensemble to perform modern gospel on the air. Between them Knowles and Anderson are credited with bringing the "ad-lib" style to church singing: the jam-influenced runs, the free-spirited melisma, the frank acknowledgment of secular music, whether it be pop, blues, or swing. Indeed. with his smoky baritone and effortless phrasing, Anderson was often compared to Bing Crosby, although they had little but crooning in common. Though Anderson's blue-notes were scattered wide and free. his salient character was a sense of time that kept him lagging behind the beat. It seemed lazy but really was soulful and meditative. After a California tour with Knowles (which included. he once said, an extra role in Gone With The Wind). Anderson returned to Chicago. and established a music studio where he instructed singers and musicians. and published his compositions.

In 1943 he appeared at the National Baptist Convention, where his performance of "Something Within" had dozens of people running and leaping, falling out in the spirit. In 1946 he made a tour of the south: in Birmingham, Alabama. he sang on the radio, and reported that ambulances were double-parked all over the Aty, carrying listeners slain by his power to the local Colored Hospital. The next step was to form his own vocal group, one modeled on his mentor's. But where Roberta Martin's crew was always co-ed, his first group consisted of female singers, the finest soloists he could find in the churches of Chicago and Gary, Indiana. He first called them the Good Shepard Singers (the name of his studio), then his Gospel Caravan. By the time he recorded for United. the group consisted of Albertina Walker, Elyse Yancey, Ora Lee Hopkins. and Nellie Grace Daniels. They were the brighest, crispest vocal ensemble in Chicago, matched only by the great Philadelphia groups, the Ward Singers and the Davis Sisters (they would also be the inspirations of the Birmingham-based Original Gospel Harmonettes.)

Each member could lead, and each performed a specific role. Albertina, the melifluous squaller, was a female version of Robert Anderson: she shared his love of delayed time and "whoa-whoa-whoa" yodelling. (Among other singers inspired by Anderson would be James Cleveland. who spent some years as his piano accompanist, and the quartet leads. Sam Cooke, Johnnie Taylor, and Lou Rawls all of whom trained with him, and all of whom carded his style into pop music.) Elyse Yancey, the oldest, was the most serious, the deep or "consecrated" member. Ora Lee Hopkins was the shout-getter, the rhythmic sparkplug; Nellie Grace Daniels was the demure soprano, a role clearly patterned on that of the Martin Singers' soprano lead—and Anderson's best friend —Delois Barrett Campbell. The Gospel Caravan fell out with their boss. On April 18, 1952, after he left the studio, the women and the group's pianist Edward Robinson remained and cut a single under the name "The Caravans." Over the years, the Caravans would become the most durable and popular of female groups. Even today when "Contemporary Gospel" has overwhelmed "Traditional: ex-Caravans like Albertina Walker, Inez Andrews, Dorothy Norwood, and the most successful member Shirley Caesar remain super-stars, accompanied on records by large choral ensembles. though still adhering to the small group sound in person.

Every set of Caravans, and there were several as members either retired or launched their own careers, was formed to Anderson's original specifications. Albertina Walker remained the group's manager and alto; there was always a lyric soprano (Ins Christmas. Johneron Davis. and, most famously, Delores Washington): always a hard Yancey-like lead (Bessie Griffin, Inez Andrews, Cassietta George), always a showmanly house-wrecker (Dorothy Norwood, Shirley Caesar). The Caravans' sound was already vivid on these 1952 recordings; and they spurred Anderson to some of his most inspired work. "Come in the Room" finds him growling like a Baptist preacher, and rocking like a Pentecostal. "Trust In Jesus" demonstrates the way blue tonality informs his style; the slurs come unbidden. Two songs. "How Could It Be" and "Pleading in Glory," begin as ballads but move into compelling and relentless choruses: Anderson was clearly out for blood, hoping that these songs would be "sure null hits." A more retiring, pop sound is evident in "My Expectations" or "Sow Righteous Seeds" with Nellie Grace Daniels' mocking-bird floating over his eagle): these songs were hits for Anderson perhaps because they anticipate the harmonies and melodic approach of "Contemporary Gospel: But the masterpiece is his own composition "Oh Lord, Is It I," a song later recorded by his close friend Mahalia Jackson.

His singing is wonderfully free and sensitive, at one moment filled with the rolling "r"s of a concert baritone, the next with the slurs of a church-man. My favorite moment comes toward the end when he sings "My soul looks up to thee, I pray, Oh Lord, Oh Lord, is it I?" Caught up in the song he barely completes the verb, "to thee I o Lord: dotting the last word in a fleeting syncopation. After the Caravans quit. Anderson spent some years leading a male group, as harmonically resplendent as his female singers. But his popularity declined with the rise of Contemporary Gospel. He became a house-keeper for the Chicago-based Ann Landers (!), and next delivered flowers for a shop owned by his first accompanist John Burns.

Occasionally he would earn royalties from Mahalia Jackson's recordings of his music. In the 1980s he made a series of recordings for Spirit Feel. In early 1995 he entered the hospital, where the last person he saw was Edward Robinson. the loyalest of his disciples, for a by-pass operation. It failed, as it usually does with diabetics, and he suffered a stroke, lingering for several months in a vegetative state. where his most reliable visitor was Eugene Smith. an old buddy from the Roberta Martin Singers. His death that June inspired a large funeral at the Greater Harvest Baptist Church. whose choir he had once conducted. As one friend remarked. it was a larger crowd than had heard him sing for years....