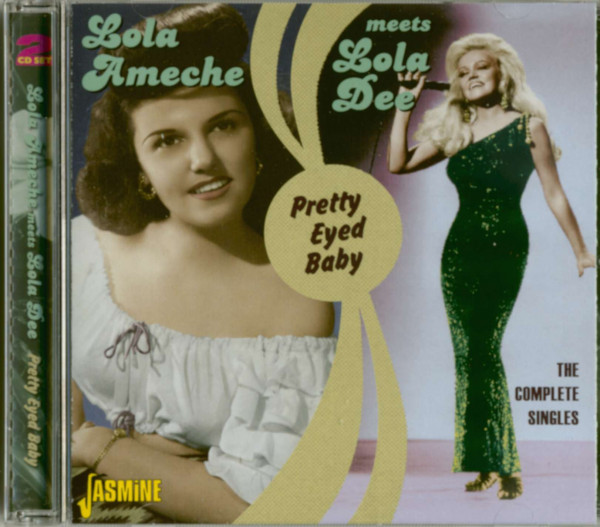 (2015 / Jasmine) 58 tracks, original Columbia, Mercury & Wing recordings, 1950-57, 6-page booklet. The first ever CD to summarize the complete singles of Lola Ameche aka. Lola Dee. She was one of the most talented singers to come out of Chicago with a tremendous and commanding voice she was capable of singing nearly every type of Pop, Blues, Jazz and novelty material continuing right into the Rock'n'Roll era rockin' the joint as Lola Dee, her second stage name. She was accompanied by such great orchestras as Ralph Marterie, Al Trace, David Carroll and Lew Douglas and features the hits: 'Pretty Eyed Baby'; 'Hitsity Hotsity'; 'Paper Roses'; 'Padre' (covered by Elvis Presley); 'Ol' Man Mose' (covered by The Jets); 'Hot Rod Henry' and her perennial Christmas hit, 'Dig That Crazy Santa Claus' (covered by Brian Setzer). Extra bonus: 7-Up commercials! - MM/Bear Family Records

In 1952, future rock 'n' roller Bill Haley adapted the 1949 Jimmy Preston R&B raver, Rock The Joint for his hopped up country band. Bill did an extensive lyric re-write, replacing Preston's references to the hucklebuck and the jitterbug with more country-style dance-steps like 'an old Paul Jones' and the Virginia reel, tailoring the tune to suit his country audience. Rock The Joint with its prominent slap bass and blazingly hot guitar solo, is considered by many to be one of the first rockabilly records and although it didn't chart, the record made plenty of noise and brought Bill to the attention of an increasingly fiscally influential teenage audience, paving the way for his eventual early rock 'n' roll dominance.

Bill's recording also attracted the attention of Mercury Records who put pop singer Lola Ameche into the studio with Ralph Marterie and his orchestra for a cover version of the Haley side. Lola turns in a very lively vocal performance of Rock The Joint, sticking to Haley's Paul Jones and Virginia reel dance alterations. In many ways, her exuberant vocal outdoes the Marterie band, which comes off as kind of tame, despite the flashy arrangement. It makes one wonder what kind of record would have resulted if Lola had teamed up with Bill Haley's band.

Not long after this record was released, Lola Ameche became Lola Dee and went on to cut several more ballad and uptempo sides for Mercury/Wing and Columbia, including a decent-selling cover of the Platters' Only You in 1955. Haley, of course, went on to become one of the pioneers of rock 'n' roll.