(1962-65 'Dot') (54:09/21)
Arthur Alexander's early 605 Dot recordings include his greatest work and some of the greatest soul music ever recorded.
Thirteen years ago, I was an employee of the US-based Country Music Association, and in Nashville on business. On Sunday 6 June I was out and about at Nashville’s sadly now-defunct Summer Lights music festival, which occupied several stages spread across several streets and blocks, approximately between the Western edge of the Cumberland River and the Ryman Auditorium. I’d noticed that Arthur Alexander was appearing at one of the smaller stages during the early evening, but I’d already arranged to meet a work colleague for dinner at roughly the time that he was due to hit the stage but I had no way of contacting him to blow said dinner off, “cellphones” still being a relative rarity in early 90s Music City.

Not to worry, I thought. Arthur’s making a comeback, he’s just released a great new album, “Lonely Just Like Me”, and doubtless there will be other opportunities to see him, possibly even back home in the UK – as he’s always been popular with us Brits, he’s bound to tour at some point. But all the while I was still thinking, “hell, no, you should go, it’ll be one of those things you can brag to your mates about in years to come”. Eventually, I decided to head on up to the stage where Arthur was due to play, with a plan to check out at least a bit of his 45 minute set before heading off to make my dinner date.

Once Arthur’s show began, I couldn’t tear myself away. Here was one of my true soul heroes, appearing in person and singing not ten feet away from where I was standing – a man whose UK 1960s tour I had not been able to witness as I was not old enough. Arthur was in wonderful form, mixing songs from his new album with those Dot, Monument, Sound Stage 7 and Warners classics from 30 years previously. At the end of his set, he smiled like a man who had just won the lottery and been promised a lifetime supply of free beer and sex, all at once. So did I – and the fact that I had just seen the great Arthur Alexander deliver a stormer of a set more than made up for the ear bashing I got from my colleague for turning up for dinner almost an hour later than had been arranged.

The following day, local paper The Tennessean gave Arthur’s set the glowing write-up it fully deserved. A couple of days later, Arthur was again back in the paper – but sadly, this time in the obituary column. He had dropped dead from a heart attack. How typical of his luck that he should do so at a time when his life was in its most upward curve in decades. He’s still mourned by his fans who regret the fact that he recorded so infrequently, especially in what should have been his prime years as a singer and songwriter.

Happily, his first label, Dot, did record him in the wake of his breakthrough hit with what is inarguably the first-ever Southern soul record, You Better Move On. So much so that Ace was able to license and released two vinyl albums worth of his Dot sides and to compile the best of his Dot repertoire, under the wholly-accurate title of THE GREATEST, as what has now become one of the longest-serving CDs in the Ace catalogue.

After 19 years, the CD’s original packaging looked a bit meagre, and although Bill Millar’s note was still an excellent read, we wanted to bring the story right up to date. Bill didn’t have time to do this for us, but kindly asked Alexander’s biographer Richard Younger to write fresh notes. Both of them contributed by lending photos and memorabilia for the package too. Thus it is that October brings a refurbished “The Greatest” to catalogue, with the same great music it’s always contained but with a sparkling new sleeve and booklet design that honour Arthur’s memory. Even if he’d only written and/or recorded You Better Move On and A Shot Of Rhythm And Blues, he would still be among the most important artists of his generation. That his repertoire also included such essentials as Anna (Go To Him), Go Home Girl, Soldier Of Love, Where Have You Been (All My Life) and (not included here) Every Day I Have To Cry Some merely reinforces that statement of fact.

These recordings are not so much a part of deep soul’s foundation as its corner-stone. If you know them and don’t own them, you will need no persuasion of further purchase. If you don’t know them, you really need to get a shot of Rhythm and Blues, with just a little rock‘n’soul on the side, just for good measure. You may never now get the chance to see Arthur sing his songs in person, but owning “The Greatest” is the next best thing to being there. 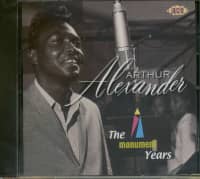