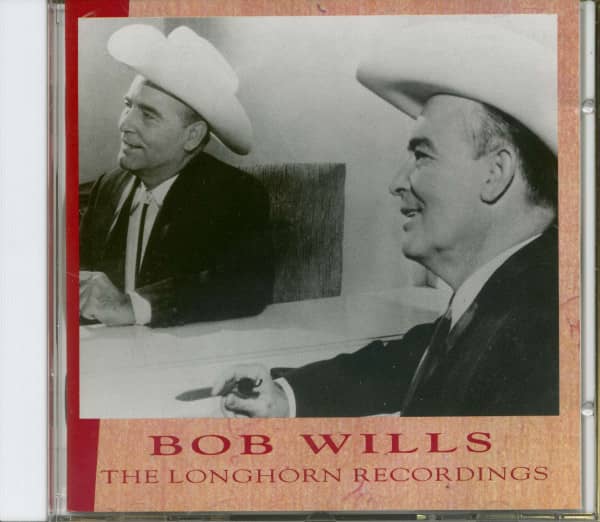 1-CD with 12-page booklet, 23 tracks. Playing time approx. 59 mns. -- Made in 1964 and 1965 for Dewey Groom's Longhorn Records, this set is notable for a complete program of fiddle favorites. Wills returned to the fiddle tunes he had learned in his youth, and produced a haunting, evocative set that included 'Big Taters', 'Mayflower Waltz', 'Faded Love', 'Beaumont Rag', 'Gone Indian', and 'Billy In The Low Ground'. The CD is rounded out with small group recordings, featuring Johnny Gimble and Luke Wills.

Pour en savoir plus sur WILLS, Bob
One of the most influential figures in country music history, the legendary Bob Wills was a... plus
Fermer menu
"WILLS, Bob"

One of the most influential figures in country music history, the legendary Bob Wills was a pioneer of the jazzy, dance hall hybrid western swing that arose and flourished in the Southwest, then later the West Coast, in the 1930s-50s. A Texan who spent much of his heyday in Oklahoma and California, the innovative and charismatic 'King Of Western Swing,' with his classic band the Texas Playboys, combined Texas fiddle music with hot jazz, blues, pop and other styles. A regional star until his smash hit San Antonio Rose propelled him to national fame, Wills' music not only enjoyed enormous popularity and had indelible impact on the development of mainstream country music, but his use of electric guitars, his heavy beat and the blues tinge in his music also made him an influential precursor to rock 'n' roll.

Wills died in 1975, but his popularity and impact linger. 2005 marks the 100th anniversary of his birth and Bear Family is celebrating that fact by announcing the planned release of a 2nd Wills box set to follow the acclaimed and important set we issued in 2000, 'San Antonio Rose' (BCD 15933). That monumental first set -- 11 CDs and a DVD of Wills' first movie -- covered Wills' seminal early recordings, encompassing the years 1932-47. Volume two will pick up where that box left off, with Wills' first recordings for MGM in the fall of 1947, and continue to the end to his final recordings from 1973. It will include numerous unissued titles and a complete, previously unreleased 1971 reunion session organized by and featuring country music legend Merle Haggard.

The second set will be issued either in late 2005 or early 2006. Watch for further information in our catalogs or at www.bear-family.de 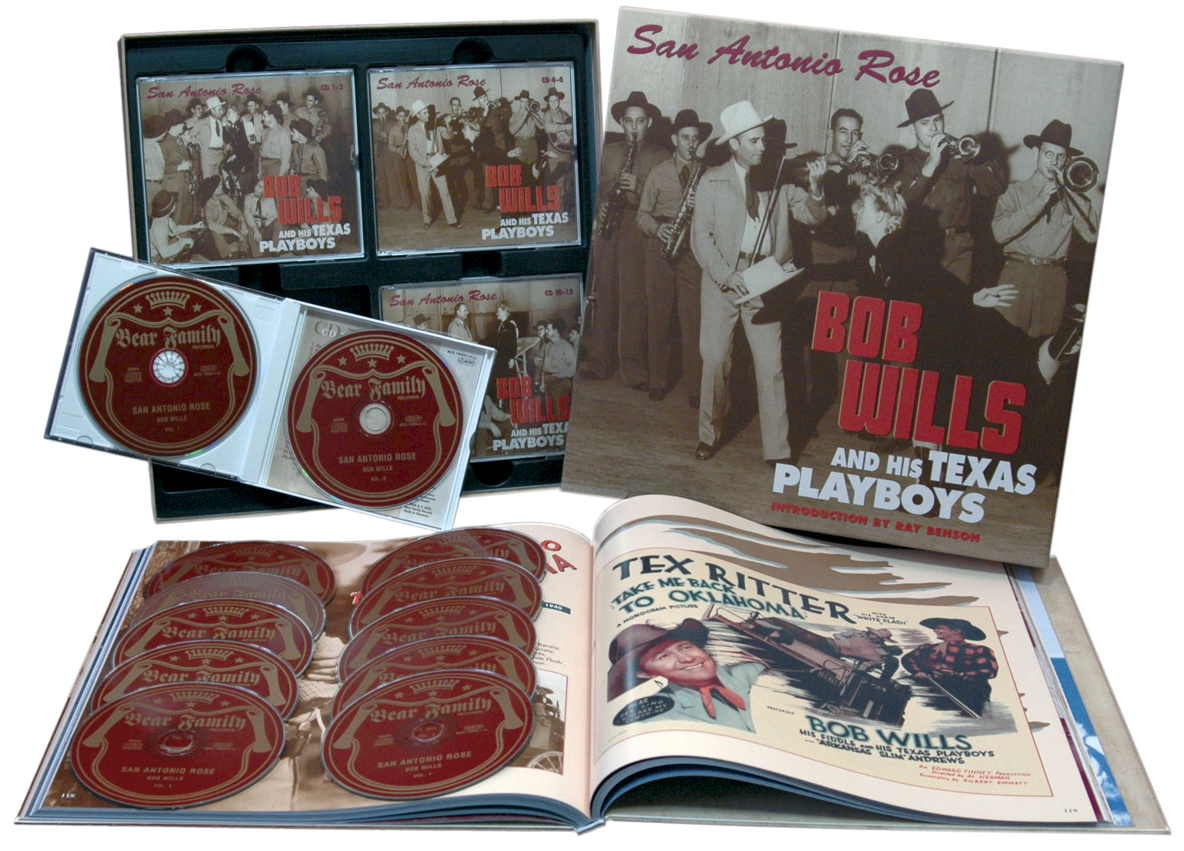 When Kris Kristofferson wrote of a "walking contradiction," he wasn't thinking of Bob Wills, but the term certainly applies. Wills represented the passions, ambiguities, and iconoclasm of not only Texas, but of Depression-era America. He was poverty and wealth, America's past, present and future all rolled into one cigar-smoking, white-Stetsoned, barrel-chested dynamo.

A virtuoso breakdown fiddler, he moved like Cab Calloway onstage. He sang the classic blues of Bessie Smith but also emulated Gene Austin's pop crooning. A musician raised in rural poverty, his cowboy boots walked right over Grand Ole Opry tradition. He could cut up on double-entendre tunes, get drunk and miss a week of dances, fight and raise hell, divorce five times and still comfortably sing hymns every Wednesday on the radio.

The fiddle tunes his dad and grandfather taught him 'between the rivers' in rural Texas remained his essence. Nonetheless, in Tulsa he built his Texas Playboys into such a sophisticated unit a New York jazz magazine sent a writer to do a story. Les Paul came to Tulsa to hear them. Wills was one of the first musicians to endorse Fender guitars and praised early rock 'n' roll as an extension of what he'd been doing from the start.

The Bob Wills sound was an amalgam that so long as it felt right, was fine by him. A master musical recycler, many of his best known songs were old fiddle tunes he'd lyricized and revamped. He drew other  songs from the 20th Century's first four decades, simplifying, editing and, working from the gut, making each one his own. Even if the songs came from others, they always came out his way.

While his impact on country music was enormous, he had little use for Nashville and rarely toured east of the Mississippi. Like Waylon and Willie, Wills had his reasons for blowing off Nashville. Nashville, however, had no choice but to listen to him. His beat became the pulse of Honky Tonk. His influence on musicians was even greater. In the 1940s and 1950s, Nashville fiddlers, steel and lead guitarists who set the trends took inspiration from their Playboy counterparts.

Working from the gut, he was fearless, creating a musical blend that was a microcosm of America--a culture constructed from that of others that crossed centuries and transcended ethnic boundaries. There was truly something for everyone.

Given all this, it's perfectly obvious why Bob Wills holds dual membership in both the Country Music and that Rock 'n' Roll Hall of Fame.

The baby--John and Emma Wills's first--came at one minute before midnight, March 6, 1905 at the Wills family's small log farmhouse near the hamlet of Kosse, 65 miles south of Dallas in Limestone County, Texas.

Married a little over a year, John Tompkins and Emmaline Foley Wills were tenant farmers, a union of two families renowned for their fiddling. They would name the new arrival James Robert Wills, in honor of a great-uncle. To the family, he'd always be 'Jim Rob,' the first of ten children: four sons, six daughters.

John Wills had descended from learned ancestors. His grandfather, a Tennessee physician named Saladin Wills, had lived in Tennessee (where the family first settled) and moved to Texas in 1845 with three brothers who all became doctors. Saladin Wills's sons, Tom, James Robert and John were all first-rate fiddlers, as was Tom Wills's son John. So were Emma's four brothers. It's said that John Wills proclaimed within minutes of his son's birth that baby Jim Rob would be a fiddler, that Tom Wills, noting the infant's long fingers, commented "He'll make a better fiddler than you, Johnny."

Jim Rob gave his parents many anxious moments. The first came not long after his birth when he went through a period of sickliness. John and Emma had dealt with that while concentrating on their cotton crop. They endured an isolated rural life and in many ways weren't much better off than the poor black tenant farmers nearby. For the white families, house parties featuring fiddle music were one respite from that hardscrabble life. Since so many of his relatives fiddled, the music was burned into his brain. Jim Rob became accustomed to hearing John and Tom Wills play rags, breakdowns and waltzes, along with mournful original ballads like Faded Love and Lily Dale. 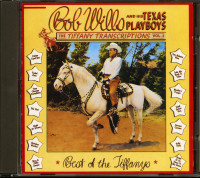