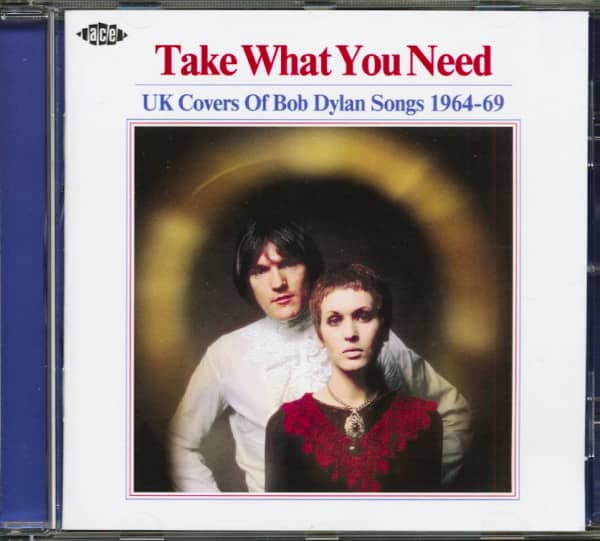 Classic Bob Dylan songs interpreted by British artists drawn from the 60s pop, folk, beat and underground scenes.
Bob Dylan’s long and meaningful association with Britain stretched back to the year of his low-key debut, “Bob Dylan”, in 1962 and his first visit to London that December. Once the USA succumbed to Beatlemania in February 1964, Dylan knew it was as crucial for him to make it in Britain as it had been for the Beatles to conquer America. He teetered outside the mainstream for almost two years until his heavily promoted, Beatles-endorsed UK visit of May 1964 propelled 1963’s breakthrough album, “Freewheelin’”, and follow-up, “The Times They Are A-Changin’”, into the UK charts. Only now did British artists cautiously begin covering Dylan songs, “Take What You Need” features the Fairies’ remarkable folk-beat take on ‘Don’t Think Twice, It’s All Right’ and Marianne Faithfull’s baroque ‘Blowin’ in the Wind’.
When Dylan returned to play eight sell-out dates in Britain the following year his fame trajectory rocketed. The shows were entirely acoustic but the electrically charged “Bringing It All Back Home” was already out and the blistering ‘Subterranean Homesick Blues’ was the second of his five pop hits in 1965. All his albums suddenly crashed into the charts. “Bringing It All Back Home” brushed aside “Freewheelin’” from the top spot in mid-May, with “The Times They Are A-Changin’” and “Another Side Of Bob Dylan” also in the Top 10. His self-titled debut even reached #13. As “Take What You Need” testifies, whether coming from the world of folk (the Three City Four, Julie Felix, Alex Campbell) or pop (Chad & Jeremy, Noel Harrison, Alan Price), there was now a rush to pillage these albums. Only Manfred Mann found the winning formula though, the playful ‘If You Gotta Go, Go Now’, a then unreleased Dylan song, was one of four of their hits from his repertoire.
Dylanmania may have subsided but the “Basement Tapes”, an extraordinary mix of joyous, throwaway songs and solemn classics, offered real pay dirt once they began circulating in 1968, our selection features Boz’s overwrought ‘I Shall Be Released’, Country Fever’s affecting reading of ‘Tears Of Rage’, and the Tim Rice-produced ‘Million Dollar Bash’ by the Mixed Bag. Unsurprisingly, Dylan’s pared-down, country approach permeated “John Wesley Harding” and “Nashville Skyline”. From these, “Take What You Need” includes the Alan Bown’s rousing treatment of ‘All Along the Watchtower’, Julie Driscoll/Brian Auger & the Trinity’s pulsating ‘I Am A Lonesome Hobo’ and Sandie Shaw’s singularly sedate ‘Lay Lady Lay’. Five decades on, many of the songs here are now standards but never again was there such a concentrated rush to record songs by the greatest and most mercurial of American artists.
MICK HOUGHTON,