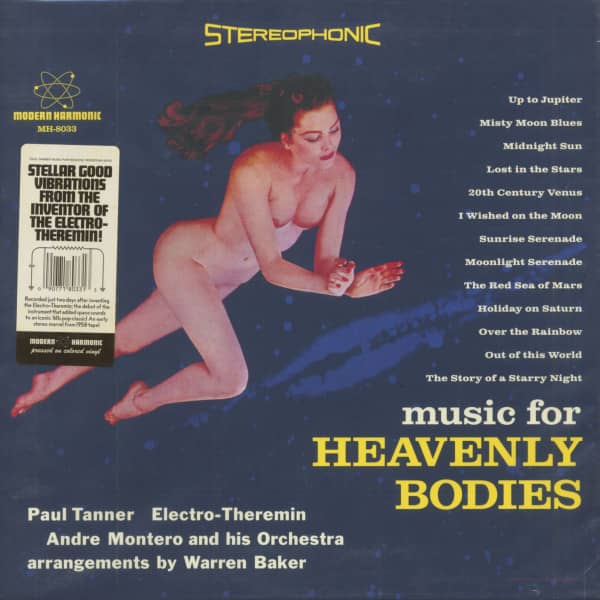 (2017/Modern Harmonic) 12 Tracks - STELLAR GOOD VIBRATIONS FROM THE INVENTOR OF THE ELECTRO-THEREMIN! Light years ahead of its time, the eerie sound, colorful orchestral blending, and haunting melodies of Music For Heavenly Bodies has become a crate digging classic. America’s fascination with space and its mysteries was at a peak during the 1950s, and this astral awareness got the attention of professional musician, Paul Tanner. Tanner, a trombonist, got his start in the original Glenn Miller Orchestra. The theremin first caught Tanner’s attention as he witnessed a studio player fighting to control the pitch and keep his theremin parts in tune. Never before had he an interest in the instrument, but with its ghostly glissando and unlimited range, Tanner got the idea of doing a space-themed album. Inspired by the studio player’s struggle, and with the help of Robert Whitsell, Paul Tanner created the Electro-Theremin, a theremin played with a knob and slide mechanism rather than hands-free. A mere two days after the creation of the Electro-Theremin, Paul Tanner recorded Music For Heavenly Bodies, a lush, eerie, and atmospheric take on space music. After the 1958 release, people around Hollywood took notice, and would lead to Tanner recording themes for My Favorite Martian, Lost in Space, and Dark Shadows. This work would secure for Tanner and his Electro-Theremin, a place in the history books, when he was contracted to record with the Beach Boys. The iconic theremin sound from “Good Vibrations” came from the very same Electro-Theremin created for Music For Heavenly Bodies. Modern Harmonic proudly presents Paul Tanner’s Electro-Theremin space odyssey, available on blue vinyl or CD--both in gatefold jackets with extensive liner notes!! 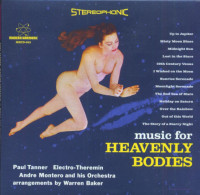 Tracklist
Tanner, Paul - Music For Heavenly Bodies (LP, Blue Vinyl) LP 1
01 Up To Jupiter
02 Misty Moon Blues
03 Holiday On Saturn
04 The Story Of A Starry Night
05 20th Century Venus
06 Out Of This World