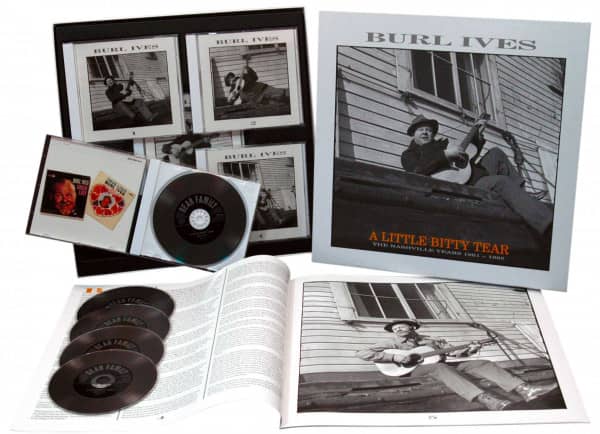 The phrase 'renaissance man' almost seems like stinting praise when its applied to someone who's enjoyed a career as remarkably prolific and varied as has Burl Ives. He is an author; a seminal figure in the history of American folk music; an Academy Award-winning screen actor and a Grammy Award-winning country singer (he is also an accomplished self-taught sailor and has received the highest honor in Freemasonry, but one has to draw the line somewhere!).

A full accounting of his triumphs on radio, television, and the Broadway stage would require an essay three times this size, and while all of these arenas will be touched on in passing, the scope of our present concern is the path which led the Wayfaring Stranger, as Ives was affectionately nicknamed, from a turn of the century midwestern boyhood to the recording studios of Nashville, Tennessee. There, with the help of legendary producer Owen Bradley, the man with arguably the most distinctive voice in all of popular music met with a combination of ingredients that brought him the greatest commercial success of his recording career.

Burl Icle Ivanhoe Ives was born on Flag Day, June 14, 1909 in Hunt Township, a farming community in Jasper County in the southern, 'bible belt' region of Illinois. With English ancestors on his father's side and Irish forefathers on his mother's, the Ives family could trace its ancestry in America back to the seventeenth century. The Ives had traditionally worked the land for their livelihood, although there was the 'occasional preacher" in the lineage. Burl was the youngest of seven children in his family. He had three sisters and two brothers (the Ives family also had another boy child that died in infancy). His parents, Frank and Cordella Ives, were humble tenant farmers, and moves in search of fertile soil were a frequent part of Burl's childhood.

Both the time and place of his youth were important factors in his development as an artist. In the summer of his birth, many believed that the return appearance of Halley's Comet expected the following year might somehow portend the end of civilization. His was a rural, almost pre-industrial environment in which, 'the air was filled with thunder, the sounds of birds, the whisper of trees — all the sounds of nature. Sights and sounds that are still to this day seed to my process of becoming 'Ives later recalled:
'As a child, I remember I used to stand in a field and I could look all the way around I could see the horizon in any direction, and I could see the curvature of the earth around me and I could feel myself right in the center of it, you see. And that gave me a position in life, in the middle of the circle, which is where we are."

As his growing fame eventually brought him international celebrity, this strong identification with his roots enabled Ives to continue to project a persona that was, in the phrase of one writer, "as American as an ice cream cone, as middle western as succotash. "Farm life also helped to shape Burl in a very literal sense of the word: "Being born on the farm and drinking whole milk from the cows, eating corn bread, greens and roastin' ears and things like that — garden truck as they called it —gave me a good start physically. That was very good fare to start out life with. "While still a young man, Burl packed 250 pounds onto his 6 foot frame, and though his weight has fluctuated greatly over the years, he has always been a commanding physical presence.

Although publicity material later related that neighbors used to refer to Burl's family as 'those singing Iveses, he does not recall that his family was particularly musically inclined. Church, however, was an integral part of their lives, and a preacher was not always available in the little wooden country churches that populated the area. Frequently, the entire service would consist of the congregation joining together in the singing of traditional hymns, and Burl believes that his first exposure to music of any kind came in church while he was still in his mother's womb. Roughly three years after his birth, in a rare Ives family extravagance, Burl's father purchased his older sister Audrey a pump organ. They were testing it out as accompaniment for a family rendition of We're Marching To Zion when the older voices dropped out in amazement at baby Burl, who knew all the lyrics and was singing them on pitch.

Of vital importance to Burl's musical education was his maternal grandmother Kate White, a strong-willed woman who smoked a long clay pipe and looked to young Burl, "as though she stepped from an Elizabethan print. "She had a great love of traditional airs and melodies which she passed along to both her daughter and Burl, and it was from her lips that he first learned such classic songs as Barbara Allen, Pearl Bryan, and Lord Thomas And Fair Eleanor. Burl was four years old and harmonizing outdoors with his mother while gardening when he was overheard by his Uncle Ira Vance, a veteran of the Civil War who'd once shaken hands with Abraham Lincoln. Uncle Ira invited him to make his public debut at an old soldier's reunion the following week. Burl sang Barbara Allen and was rewarded with a dollar bill, which he'd never seen before, that he promptly spent on hot dogs and a merry-go-round, both of which were also new to him. Although at this time his exposure to popular music was limited, the Ives did have neighbors who owned a 'talking machine' which played musical cylinders by the likes of Ada Jones & Lynn Spencer and the Peerless Quartet. Years later at a World War I bond rally, young Burl became distracted by a torn piece of wallpaper while performing the latter group's America, Here's My Boy and, without missing a beat, he left the stage while singing and returned only after smoothing over the offending scrap with his thumb.

After a rousing church duet performance of Forty Years Ago with his sister Argola, Burl developed a reputation as a child evangelist and he and his sister were much in demand at homecomings and revival meetings. His musical horizons were also broadened by the tent shows that passed through town. These vaudeville-like reviews usually consisted of a silent film, a line of dancers, and some supporting comedy and singing acts. The youngster was eventually inspired to save enough money to buy his first instrument, a banjo, though he later switched to the guitar.

Burl made his theatrical debut in the sixth grade, and the following year he was featured in a 'home talent play' with minstrel overtones entitled `Misery Moon the Hoo-dooed Coon.' Before long, Burl was appearing in plays in neighboring towns like Willow Hill, Yale, and St. Marie. All during this time Burl's father Frank had been studying engineering between farming seasons, and he soon became involved in the construction trade. As business picked up, the family enjoyed a slightly more prosperous lifestyle and the children were sent to attend high... 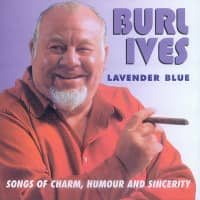 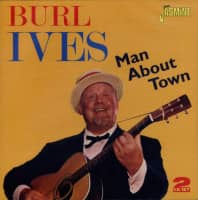