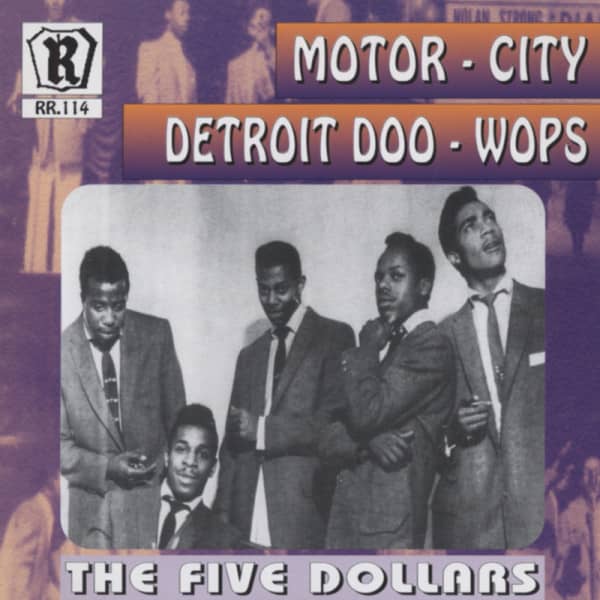 Jack and Devora Brown's Detroit-based Fortune Records was the ultimate mom-and-pop operation. That made it easy for hungry neighborhood groups like The Five Dollars to stroll in for an audition and get signed. The quintet started out in 1953 singing on Gratiot Street on Detroit's East Side. Lead tenor Eddie Hurt, tenor Lonnie Heard, tenor/baritone James Drayton, Jr., and bass Charles Evans were initially known as The Del-Torros. Tenor/baritone Richard Lawrence came in a little later, as did Bessemer, Alabama-born Andre Williams, a veteran of Chicago's Five Thrills whose showmanship was an advantage. He and Hurt already knew each other.

"Little Eddie had a group up there, The Calrays," says Williams. "When I went up there, they'd sit out on the porch and sing. And I'd sit in with 'em. After I came out of the Navy, I just went back to Detroit, because I'd eventually wind up marrying his sister."  At an unsuccessful audition in Chicago for Vee-Jay Records, A&R man Calvin Carter suggested a name change to The Five Dollars (they'd later toss fake dollar bills into their audiences as a gimmick).

The group walked into Fortune in mid-1955 and cut their debut single. Harmony Of Love was a departure: it was just wordless harmonizing. The flip, Doctor Baby, did have lascivious lyrics, delivered by Lawrence (who was drafted right after that), and a trombone solo. For Andre's first turn in the spotlight that fall on the saucy Going Down To Tia Juana and the moaning jailhouse lament Pulling Time, the group was recast as The Don Juans, a handle primarily reserved for when they backed other Fortune acts like Joe Weaver. So Strange, The Five Dollars' next offering in early '56, was another untraditional wordless effort.

Hurt led the Dollars' revival of I Will Wait (introduced by The Four Buddies on Savoy more than a half-decade prior) later in '56 and How To Do The Bacon Fat, an answer to Andre's Fortune hit Bacon Fat, the next year (Williams was gone from the group by then). The Browns remained loyal to The Five Dollars despite their lack of hits, issuing their My Mama Said in 1959 and My Baby-O, a mid-tempo outing written and fronted by Little Eddie and bathed in Fortune's signature echo, in mid-'60 (That's The Way It Goes, also featuring Hurt, was its platter mate). It was their Fortune farewell. Hurt was shot in the head and killed in 1987.