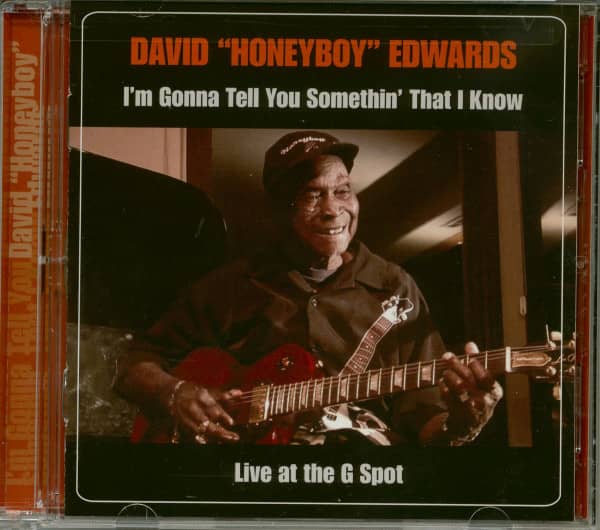 (2017/Omnivore) 20 tracks.
Blues Legend's final recorded show on CD,DVD combo David 'Honeyboy' Edwards was the last of the great Mississippi Delta bluesmen. Born is Shaw, Mississippi, on June 28, 1915, his life was intertwined with almost every blues legend including Robert Johnson, Sonny Boy Williamson, Sunnlyand Slim, Howlin' Wolf, Muddy Waters, and many more. Even at 95 years old, Honeyboy was still singing and playing like a man of less than half that age. That show turned out to be the last time Honeyboy was filmed and recorded. The performance is now available to be seen and heard on I'm Gonna Tell You Somethin' That I Know - a CD,DVD combo documenting that historic appearance. The shows' 9 songs (both originals and classics) are contained on both formats, and the CD contains a bonus version of 'That's Alright.' The DVD contains 'Honeyboy Tells You Something That He Knows' - over 20 minutes of Edwards giving advice to musicians and telling stories of his life, including vividly recalling the night Robert Johnson died, tales of Charlie Patton, Big Walter Horton, and others, and much more. Honeyboy lived strong into his 96th year, and was part of many seminal moments in blues history. I'm Gonna Tell You Somethin' I Know captures the timeless, evocative power of Honeyboy, documents his warmth and humor, and shows his palpable connection to Jeff Dale, one of his 'sons of the blues.'