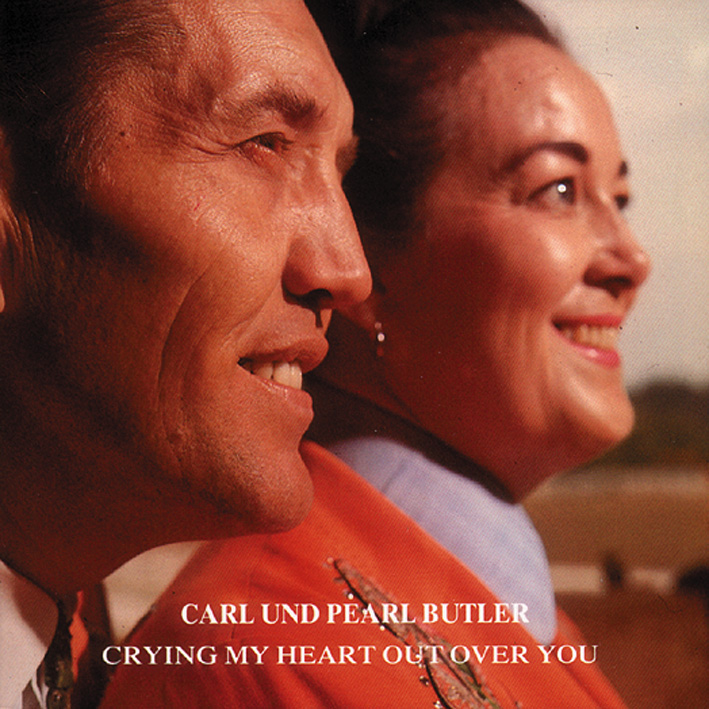 Carl Roberts Butler was born in Knoxville, Tennessee, June 2, 1924. About his father, Jim Butler, very little is known, because he left the family when Carl's brother Allen (born January 7, 1932) was still young. Their mother, Annie Mae Butler, was a native of Tellico Plains, Tennessee, and granddaughter of an American Indian. She raised them by working at Knoxville's Brookside Mills and elsewhere. A terrific cook, she sang around the kitchen and especially loved gospel music. She encouraged Carl's early musical interests by buying Gene Autry and Jimmie Rodgers records for him. Carl helped his mother and his little brother (keeping him in gum and toy soldiers) from an early age by distributing circulars for area merchants. Mother Butler later recalled that Carl preferred staying indoors listening to records to playing outdoors with friends. He later cited Jimmie Rodgers as his main formative influence, but a $7.50 Gene Autry guitar, a Christmas gift from his mother, became his first instrument, one which he used for so long that his brother remembers Carl pasting it together as repairs were needed.

At age 12, Carl won an amateur contest at a neighborhood theater, and this was his entrée to occasional radio work on WROL which had sponsored the contest. Grocer and country music talent scout Cas Walker sponsored Carl's broadcasts on that station for some nine years. As country music historian Charles Wolfe discussed in his notes to Bear Family's Carl Smith box, 'Satisfaction Guaranteed,' (BCD 15849), Knoxville was the hub of a fertile musical area dominated by two men: grocer Cas Walker, who “relished amateur shows, local talent, bluegrass, and gospel singers" (Butler's discovery and style fit this description perfectly) and broadcaster Lowell Blanchard of WNOX, who gathered an eclectic stable of bigger-name talent for that more powerful station. There was a time on WROL in the early 1940s when Butler recalls that he and announcer Grant Turner practically "opened up"  the station for early morning broadcasts: they remained friends in later years at the Grand Ole Opry (and they are now buried very close together at Williamson Memorial Gardens near Franklin). At WROL, Butler worked with a group called the Hub Spinners, and eventually came to know such local entertainers as Carl Smith, Archie Campbell, Little Robert (Van Winkle), bassist and comic Junior Tullock (best remembered as Cousin Jake Tullock from his days with Flatt & Scruggs), the Sauceman Brothers, and the Webster Brothers. Carl played and sang at area dances and clubs on weekends as he continued his schooling at Knoxville's Stair Tech High (where he joined the ROTC). An early 1950s publicity release added the interesting aside that "Carl has since played for several hundred square dances, (but) he has yet to dance for the first time."

Wartime military service ended his formal schooling: Butler served for three years in the 35th Field Hospital unit in North Africa and Italy. His brother recalls that Carl continued to play and sing while in the military, and letters to his mother would sometimes request new strings for his guitar. He and a fellow soldier carried around Roy Acuff's Okeh record of The Prodigal Son, and would play it whenever they could borrow a record player.

Butler came home in 1945 and resumed his efforts to get a full-time music career going at Knoxville's clubs, dances, and radio stations. At an outdoor dance just after the war, Carl 'Sandy' Butler (a short-lived nickname he used professionally) met the love of his life, Pearl Dee Jones. Born in Nashville on September 20, 1927 but raised in and around Knoxville, Pearl was the sixth of twelve children (nine of them girls) born to miner William Jones and his wife Lona May Elmore Jones. Carl at first mistook her for her sister, Earline Jones, but Pearl yelled back, "Hello, Carl Butler. I'm Pearl, not Earline." After a whirlwind courtship, Carl was away with radio work in Raleigh, North Carolina, when Pearl fell ill. Her mother figured it was nothing more than lovesickness, so she phoned Carl, who came rushing back. They were married February 27, 1946. Pearl for several years earned a good bit of the family income as a meat cutter and packer for Cas Walker, Carl's longtime radio sponsor.

All told, Butler was away from Knoxville in Raleigh (at WPTF with the Bailey Brothers) and later in Lexington, Kentucky, for about three years. During this time he worked with groups he had come to know in Knoxville, especially the Bailey Brothers (Danny and Charlie) and the Sauceman Brothers (Carl and J.P.). Stylistically, both groups fell in that twilight world between the sweet harmony brother duets so popular in the 1930s and the newer, faster bluegrass style being forged at that time by Bill Monroe, Lester Flatt & Earl Scruggs, and the Stanley Brothers. Carl worked for each group as a featured lead singer and rhythm guitarist, and made his first records in the late 1940s with them in separate sessions for Jim Stanton's Johnson City, Tennessee-based Rich-R-Tone Records. With the Bailey Brothers, he sang lead on the folk song favorite, John Henry, then sang lead on two gospel quartet numbers for the Saucemans – Hallelujah We Shall Rise (which he would later reprise on Columbia with the Webster Brothers joining him) and I'll Be No Stranger There. The fourth part on their quartet harmony was handled by guitarist Joe Stuart, who at that session made the first recordings of the influential three-fingered bluegrass guitar style.

About this time — in the summer of 1948 — Carl's career was seriously derailed by an auto accident near Blaine, Tennessee. Coming back from a late night dance at Pine Mountain, the driver of their 1934 Ford, bassist Junior Tullock, fell asleep at the wheel and struck a river bridge at 80 miles-an-hour. Two of the passengers were thrown from the car, but Carl's head went up through the roof as the car turned over repeatedly on its way down a steep bank and into the river. Somehow he managed to escape the car and crawl up the bank, but remained unconscious in Knoxville General Hospital for three full weeks. Knoxville radio talent pitched in with a benefit show to raise money for his extensive reconstructive surgery, and eventually Carl was back at work for Cas Walker in the Knoxville market with shows on WROL, backed by a group he formed and named the Lonesome Pine Boys. The spotlighted members were George 'Speedy' Krise on dobro (who formerly worked with Jimmy Dickens, The Lilly Brothers, and Molly O'Day's Cumberland Mountain Folks) and Clarence 'Tater' Tate (who, like Butler, had previously worked with the Bailey Brothers and the Sauceman Brothers) or Art Wooten on fiddle. Junior Tullock, the driver on the night of the near-fatal wreck, was the bass player, Smokey White played extra acoustic guitar (that's him on the guitar break of Country Mile from Butler's very first session), and the banjoist heard on the first three recording sessions, is Johnnie Whisnant.