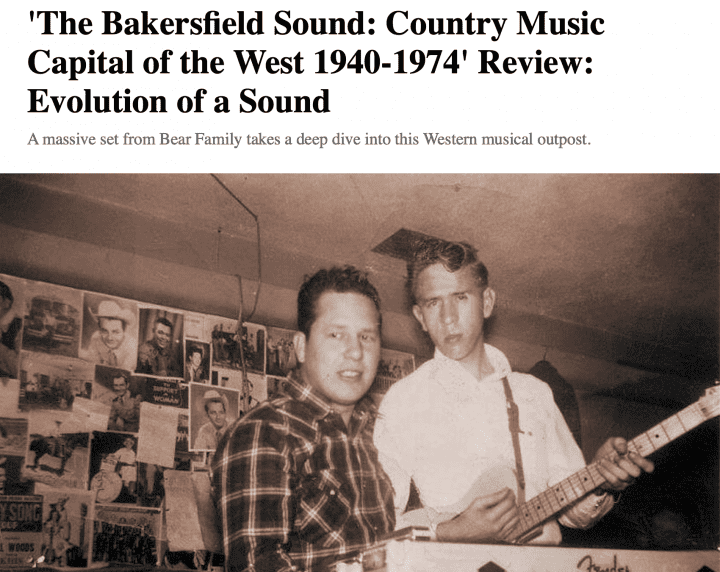 It would be difficult to identify popularized regional music of any stripe that hadn't begun in some lively, compact scene where music makers exchanged ideas and found a responsive, enduring audience for what their interaction instigated. Yet the dynamics of those formative places and times are easily lost to history along the way. Nostalgia, fading memories and simplified marketing characterizations can reduce them to one-note brands, or mere settings for the emergence of a single star or two—whether that scene was 52nd Street New York jazz, Seattle grunge, or loud and edgy Bakersfield, Calif., country.

In the Bakersfield case, even strong proponents tend to describe it as built on a distinctive "sound," based on electrified, rock-like guitar; crying pedal steel; and traditionalist country vocal styles that could cut through the air much like those guitars did. And the names Buck Owens and Merle Haggard are brought up fast. But there was not just one sound there, and that celebrated one took years to evolve. Those country legends emerged from a pack of varyingly gifted working professionals—some famed, many not—who were immersed in the local honky-tonk culture and added to it.

Encapsulating that lively evolution is what the remarkable new 10-CD, 299-track set and accompanying photo-filled 224-page book from the deep-diving Bear Family label does so well. Out now, "The Bakersfield Sound: Country Music Capital of the West 1940-1974" may use that inadequate "Sound" descriptor in its title for familiarity's sake, but as producer and book author Scott B. Bomar notes in his introduction to the whole extravaganza, "This collection is about context."

The context is life in California's agriculturally rich Central Valley as it was experienced by the "Grapes of Wrath"-era migrants who'd settled there by the set's 1940 start date, with their notions of great, affordable entertainment shaped by the exuberant Western Swing bands and dancing styles of Texas and Oklahoma dance halls. The sheer volume that new electrified instruments could produce made smaller combos in multiplying honky-tonk bars the local night-out standard, and regional radio, then television made hot performers from those bars potential recording stars.

This set recaptures Bakersfield music as it developed, peaked and ultimately subsided in commercial impact—pulling together everything from field recordings of music-making residents of the Valley's labor camps to local radio transcriptions, recordings from dozens of tiny regional record labels, and outtakes and revealing deep-catalog tracks from the names—Messrs. Haggard and Owens, Wynn Stewart, Jean Shepard, Red Simpson, Bonnie Owens, Johnny Bond, Joe and Rose Lee Maphis, Barbara Mandrell —who did go on to become big-record-label country royalty.

The emphasis is always on how the performers took part in and emerged from the Bakersfield scene. So, for example, Buck and Merle appear as sidemen on other players' records, well before their own bandleading careers get going in discs that follow. And some of their early songs are taken up by others before they're hitmakers themselves. Country songwriting giants-to-be Harlan Howard, Tommy Collins and Dallas Frazier enter the picture as young singers as well as writers. Rock guitar heroes Clarence White and James Burton appear as country session aces. It's especially rewarding that names that may get only passing mentions in less encompassing collections—TV hosts Herb Henson and Billy Mize, bandleader and musical mentor Bill Woods —can be heard making engaging music here.

Mr. Bomar's empathy for the music makers and their music, and his deep research, combine to make the hardbound book in this boxed set as revealing a document of Bakersfield history as has been available thus far. Detailed, flowing biographies of dozens of players and minor stars of the scene are there, along with those of the more celebrated. A very generous collection of photos showing the players in action, and in varied combinations across that 1940-74 span, adds immensely to the sense of the Bakersfield scene's bustling dynamism.

This listener found himself caught up in the first five discs' musical suspense story. They chronicle the music of the emerging scene—much of it unpredictable, with some tracks taking audible steps toward the sound of Bakersfield's mid-1960s popular heyday, but others sounding softer and less edgy. That top of the arc period when Buck Owens and the Buckaroos and Merle Haggard and the Strangers had dozens of No. 1 hits between them is well and interestingly represented.

There is some inevitable falling off in potency near the end of the set, as the scene began its decline. The 1974 death of Buck Owens's indispensable sidekick Don Rich and Merle Haggard's move to recording in Nashville mark the end of the story.

Bakersfield, Mr. Bomar suggests, never became "Nashville West," as some had hoped, because it was at heart a live music-making scene, not an industry center built to last. Neither, this set reminds us, did it arise simply as a deliberate, reactive alternative to the sounds out of Nashville. It was there because it was a community with a feisty sensibility of its own. That sensibility is on full display in this set.

—Mr. Mazor reviews country and roots music for the Journal.