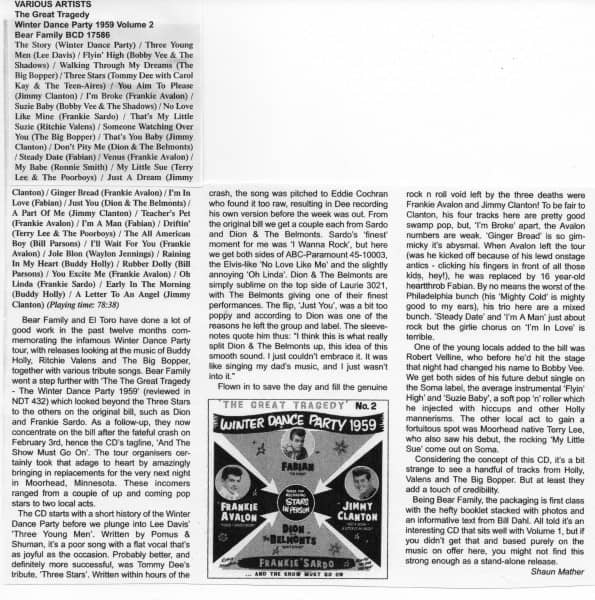 Bear Family and El Toro have done a lot of good work in the past twelve months com-memorating the infamous Winter Dance Party tour, with releases looking at the music of Buddy Holly, Ritchie Valens and The Big Bopper, together with various tribute songs. Bear Family went a step further with The The Great Tragedy - The Winter Dance Party 1959' (reviewed in NDT 432) which looked beyond the Three Stars to the others on the original bill, such as Dion and Frankie Sardo. As a follow-up, they now concentrate on the bill after the fateful crash on February 3rd, hence the CD's tagline, 'And The Show Must Go On'. The tour organisers cer-tainly took that adage to heart by amazingly bringing in replacements for the very next night in Moorhead, Minnesota.

These incomers ranged from a couple of up and coming pop stars to two local acts. The CD starts with a short history of the Winter Dance Party before we plunge into Lee Davis' 'Three Young Men'. Written by Pomus & Shuman, it's a poor song with a flat vocal that's as joyful as the occasion. Probably better, and definitely more successful, was Tommy Dee's tribute, 'Three Stars'. Written within hours of the  crash, the song was pitched to Eddie Cochran who found it too raw, resulting in Dee recording his own version before the week was out. From the original bill we get a couple each from Sardo and Dion & The Belmonts. Sardo's 'finest' moment for me was 'I Wanna Rock', but here we get both sides of ABC-Paramount 45-10003, the Elvis-like 'No Love Like Me' and the slightly annoying 'Oh Linda'. Dion & The Belmonts are simply sublime on the top side of Laurie 3021, with The Belmonts giving one of their finest performances.

The flip, 'Just You', was a bit too poppy and according to Dion was one of the reasons he left the group and label. The sleeve-notes quote him thus: "I think this is what really split Dion & The Belmonts up, this idea of this smooth sound. I just couldn't embrace it. It was like singing my dad's music, and I just wasn't into it." Flown in to save the day and fill the genuine