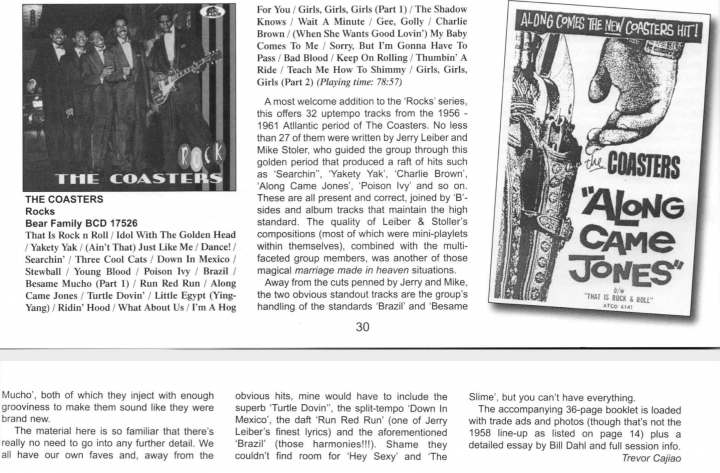 A most welcome addition to the 'Rocks' series, this offers 32 uptempo tracks from the 1956 -1961 Atllantic period of The Coasters. No less than 27 of them were written by Jerry Leiber and Mike Stoler, who guided the group through this golden period that produced a raft of hits such as 'Searchin", `Yakety Yak', 'Charlie Brown', 'Along Came Jones', 'Poison Ivy' and so on. These are all present and correct, joined by 'B'-sides and album tracks that maintain the high standard. The quality of Leiber & Stoller's compositions (most of which were mini-playlets within themselves), combined with the multi-faceted group members, was another of those magical marriage made in heaven situations.

Away from the cuts penned by Jerry and Mike, the two obvious standout tracks are the group's handling of the standards 'Brazil' and 'Besame Mucho', both of which they inject with enough grooviness to make them sound like they were brand new. The material here is so familiar that there's really no need to go into any further detail. We all have our own faves and, away from the obvious hits, mine would have to include the superb 'Turtle Dovin", the split-tempo 'Down In Mexico', the daft Run Red Run' (one of Jerry Leiber's finest lyrics) and the aforementioned 'Brazil' (those harmonies!!!). Shame they couldn't find room for 'Hey Sexy' and 'The Slime', but you can't have everything. The accompanying 36-page booklet is loaded with trade ads and photos (though that's not the 1958 line-up as listed on page 14) plus a detailed essay by Bill Dahl and full session info.
Trevor Cajiao