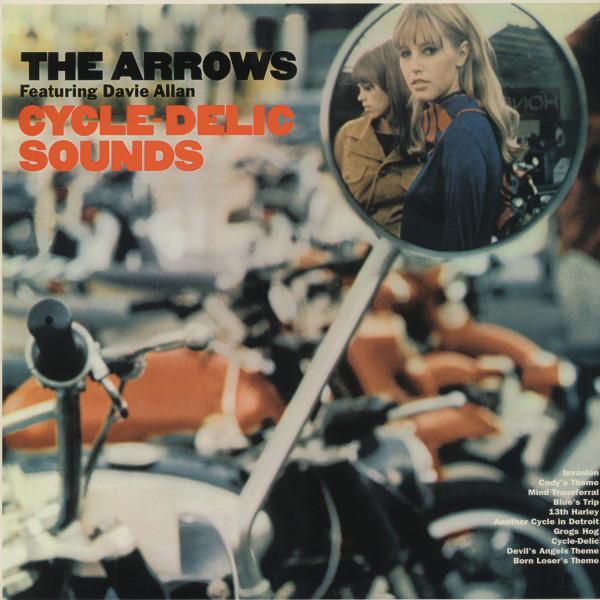 Building on the roaring radio success of Blue's Theme, Davie Allan & the Arrows went full throttle on Cycle-Delic Sounds! While known primarily for his aggressive attack, the album features a variety of guitar tones and offers full evidence of Davie's wide-ranging guitar prowess. The standout selection is the epic, almost seven minute title track, which sees Davie's Mosrite Fuzzrite battle for supremacy with his wah-wah pedal, resulting in victory for guitar fanatics everywhere. 'Cody's Theme' shows the expressive, fuzz-free side of Davie's style, particularly when juxtaposed with the manic
madness of 'Invasion,' a bountiful buzzfest bursting with gnarly guitar goodness.

Echoes of the previous year's smash single can be heard in the breathless beat of 'Blue's Trip.' On 'Another Cycle in Detroit,' you can practically smell the exhaust fumes and literally hear the revving engine of a humungous Harley! Throughout, Cycle-Delic Sounds proves to be one of the highest horsepower entries in the Arrows' sonic garage. Fuel-injected, road hugging hi-def vinyl comes standard and a screaming-color cardboard chassis is included at no extra charge. No tax, title or license are enclosed, however, so this offer is strictly for outlaws only. Cut from the awesome original Tower Records mono masters!