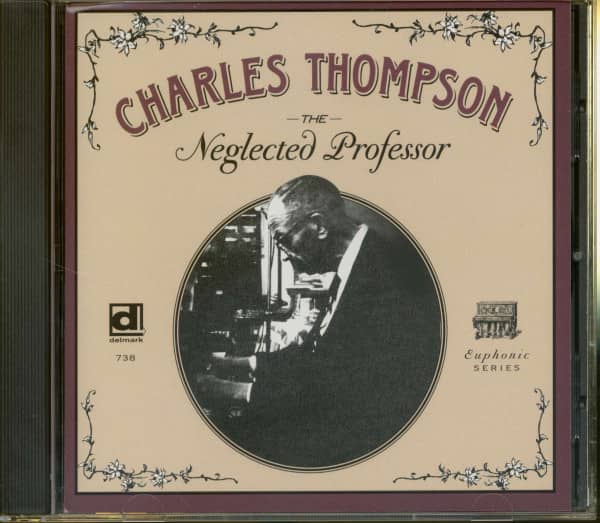 Charles Thomspon, born in 1891, first met his mentor, stride pianist, James P. Johnson around 1912. In 1916 Thompson became the Missouri State Champion Ragtime Pianist. He combined his lyrical midwestern ragtime with the blues, and pointed the way east to the Harlem style that would become the jazz piano mainstream.These 26 performances from the early '60s (eight previously unissued) are culled from two informal parties one of which was hosted by ragophile Trebor Tichenor who wrote the descriptive notes.

Charles Hubbard Thompson was born in St. Louis. Missouri June 19, 1891. the same year 'The Father of St. Louis Ragtime, 'Tom Turpin first appeared in the city directories as a musician on Targee Street. Twenty five years later Thompson would unseat Turpin as 'Missouri State Champion Ragtime Pianist.' Both of Charles' parents were school teachers who encouraged him to begin piano lessons at age four, though Charley always insisted he was self-taught. According to John Cotter's thesis, The Negro in Music in St. Louis. Thompson attended preparatory school at Howard University in Washington, D.C. It was probably then that he first met his future musical mentor, stride pianist James P Johnson. Beginning in 1911, Thompson made trips east performing in Ohio and Indiana. Various dates are given for his meetings with Johnson: if he first met him around 1912.

James P had barely begun his career as a pianist on Coney Island. Charley continued trips east and years later told pianist Bob Wright that he could not have defeated Turpin without bringing back some of the Harlem Stride style to St. Louis. Other cities Charley played were New York, where for a time he was the only black pianist on Broadway, and Atlantic City, where Pubic Blake and Lucky Roberts had pioneered the Harlem Style as early as 1907. Thompson's greatest claim to fame was the legendary defeat of Tom Turpin that climaxed a four week period of piano competition at St. Louis' Booker T Washington Theatre. The con-test was judged on style, improvisation, interpre-tation, and speed. Three pianists would play each show. and two would be eliminated. The last three were Paul Cedric, Owen Marshall (probably classic rag composer Arthur Owen Marshall) and Thompson. Charles Thompson was declared the winner and the public demanded that he play against Turpin.

According to John Cotter, Turpin had won such contests throughout the state since Scott Joplin had left St. Louis. Charley emerged victorious again and was awarded a gold medal and $350.00 in cash.
The defeat of Tom Turpin marked the change in ragtime of the 'teens: tempos were increasing and pianists were developing a more adventure-some, virtuosic style. Late St. Louis rag is epito-mized in Robert Hampton's 'Cataract Rag.' and in Thompson's 'Lily Rag.' both published by John Stark in 1914. Besides Hampton. Charley recalled other great players: Artie Matthews he said had the fastest execution he ever heard, and Conroy Casey who was a favorite of Scott Joplin.

'Lily Rag' was Thompson's masterpiece and assured him the contest victory in 1916. The rag was transcribed by Artie Matthews and published under the alternate Stark label, Syndicate Music Co. Charley played and composed by ear and disliked having to read, let alone write out scores. He preferred the deeply flatted keys of Ab. Db, and Gb; his technique was breathtaking to watch with its economy of motion and unortho-dox way he played with fingertips upturned. The Matthews transcription captures the spirit of 'Lily Rag,' but does not include the syncopated bass breaks in octaves that Thompson always did, at least in later years. Second only to 'Lily' is Thompson's 'Delmar Rag' named after a popular local skating rink.

The opening strain is one of several ragtime versions of Mendelsohn's 'Spring Song.' Charley reveals that he picked it up from the aforementioned Con-roy Casey. The second strain recall's Hampton's 'Cataract Rag.' 'Centennial Rag' was written for the St. Louis Bicentennial of 1964. The tune has a familiar strain that Jelly Roll Morton used for the trio of his 'King Porter Stomp.' Thompson said this theme was known among the pianists as the 'rush-on,' used as a filler between tunes in piano contests. 'Derby Stomp' reveals Thompson's affinity for down home blues piano, highlighted by an astound-ing contrapuntal bass line in fast single notes.

But the Harlem influence remained prominent in his style, perhaps best set forth in his pop tune renditions such as 'Five Foot Two' and 'The One I Love.' A hallmark of his playing is a tasteful use of embellishments that he called 'fill-ins,' fre-quently performed in fast triplets. His technique and style are epitomized here in his brilliant rendi-tion of Bowman's '12th Street Rag.' 'The Dream' is Thompson's version of perhaps the earliest East Coast rag, credited to Jess Pickett and recalled by both Eubie Blake and James P Johnson. 'When Sambo Goes To France' was a locally popular World War I song that composer Tom Turpin published in 1918 out of his later saloon that became famous as 'Jazzland.'

'Brother-In-Law Dan' is an unpublished Joe Jordan song that surfaced during the 1960 'Reunion in Ragtime' sessions organized by Bob Darch, and included Thompson, Eubie Blake, and Joe Jordan. Charley recalled that following the landmark contest of 1916 that he played calliope and piano on the City of Charleston riverboat on the Ohio River. He recalled hangouts such as Kate Gryder's in Lovejoy, IL, and the Chauffeur's Club in St. Louis where people would come to recruit musi-cians for parties.