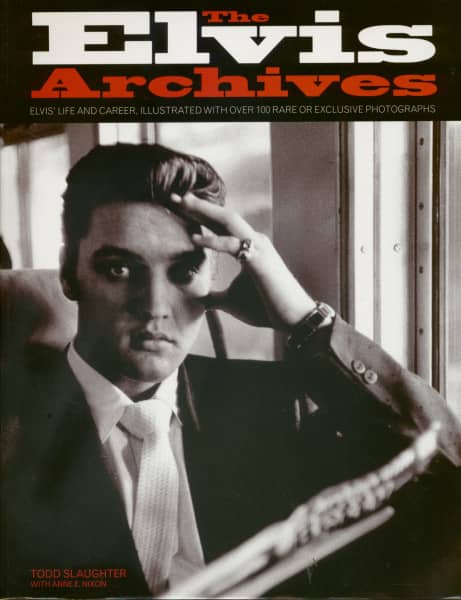 An exclusive account of the extraordinary life of Elvis Aron Presley, 1935-1977 The Elvis Archives details the undisputed facts of Elvis' life and career and is illustrated with over 100 rare and exclusive photographs. Written and compiled by British fan club president Todd Slaughter with international Elvis expert Anne E. Nixon, The Elvis Archives presents the documentary truth about Elvis, a truth that has so often been forgotten amid the deluge of hero-worship, criticism and myth-making of the past 30 years.

...
It was very different back in 1935 on that cold January day —the 8th, a Tuesday — when Gladys Love Presley, aged 22, gave Nirth to identical twins in the tiny house on Old Saltillo Road built by Vernon Presley, his father, and his brother Vester. Vernon was four years younger than his wife, and they'd only moved into their new home the previous month. Sadness mingled with joy; the first child, Jessie Garon, was stillborn. Happily, Elvis Aaron survived and was given love in abundance. There may have been dreadful poverty and hardship in East Tupelo in the Depression-hit Thirties, but love cost nothing, and Tupelo's child grew up secure in the heart of his family, and in a church-minded, close-knit community that sang its heart out in praise of God.

The music the boy heard in the First Assembly of God church was to influence and shape his future. A quote in early fanzines, attributed to Gladys, told how the church singing affected her young son: "When Elvis was about two years old, he'd slide off my lap, run down the aisle, and stand looking up at the choir and try to sing with them. He was too little to know the words, but he could carry the tune." As he grew older, Elvis sang at church revivals with his parents, a favourite song being, 'I Won't Have To Cross The Jordan Alone'. "Even then," Gladys reportedly said, "he couldn't stand still when he sang." Interestingly, the only Grammys that Elvis ever won were for gospel music (in 1967 for the album How Great Thou Art, in 1972 for the album He Touched Me, and in 1974 for a live performance of `How Great Thou Art').

In 2001, Elvis was inducted posthumously into the Gospel Music Hall of Fame, whose previous inductees included Mahalia Jackson and Billy Graham. The pastor of the First Assembly of God church in East Tupelo was Frank Smith, who used a guitar and sang to get his message across to his congregation, and who encouraged young Elvis in his singing.

Many years after Elvis became famous, it became known that Vernon Presley had done time in Parchman Penitentiary in Mississippi. With two others, he'd forged a cheque, and in June 1938, began his three-year incarceration, but was released in less than a year. The loss of the main family breadwinner meant that Gladys and Elvis had to leave their home and move in with relatives. On Vernon's release, the family lived in a succession of homes. Gladys, a skilled needlewoman, did her bit to help the family finances, and Vernon found what work he could. In the autumn of 1941, six-year-old Elvis began to attend East Tupelo Consolidated School on Lake Street, also known as Lawhon Elementary School. One of his classmates was Becky Martin, who recalled that pupils were required to learn the names of the American presidents and the capital cities of each state, as well as the Gettysburg Address, the one that contains the oft-quoted words, "... government of the people, for the people, by the people", which Abraham Lincoln gave in 1862. Like Elvis, Becky Martin enjoyed singing. Before classes at Lawhon School, Becky said that there'd be a chapel service, and Elvis. would sometimes sing 'God Bless My Daddy', or say a prayer.

It was, some sources say, Elvis's 5th grade teacher, Mrs Oleta Grimes, who taught Elvis to sing 'Old Shep', a touching ballad about a boy and his faithful dog. She certainly had plenty of faith in the quiet child, and in 1945, when he was ten years old, it was Mrs Grimes who entered the shy lad into the Children's Day contest at the annual Mississippi-Alabama fair at the Tupelo Fairgrounds on October 3...