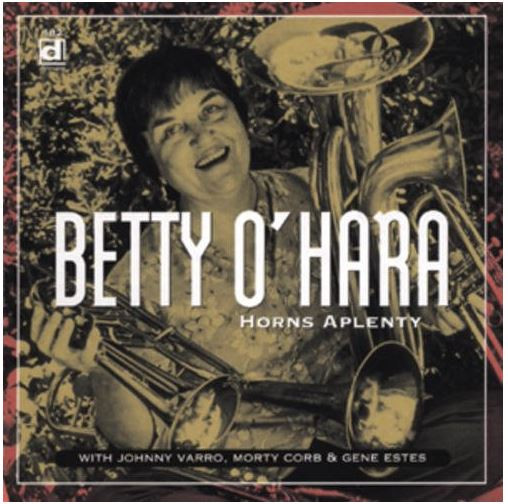 (1985/Delmark) 10 tracks, Betty O'Hara is among jazz's best kept secrets -- a gifted but obscure and under-recorded improviser/arranger who knew her way around several horns and was an expressive singer to boot. Before suffering the debilitating effects of a major stroke in 1998, O'Hara could handle hard bop and pre-bop jazz equally well, although she emphasizes swing on Horns Aplenty. The title says it nicely -- on this excellent 1985 date, O'Hara is featured on trumpet, trombone, and flugelhorn as well as the euphonium. (She also played the cornet, although not on this album.) Joined by pianist Johnny Varro, bassist Morty Corb, and drummer/vibist Gene Estes, the L.A. resident is heard as both an instrumentalist and a singer. O'Hara's vocals on 'Stardust' and 'If Dreams Come True' have a Peggy Lee-ish quality and show how charming she could be, and the instrumentals demonstrate that while O'Hara was consistently swinging, she was also quite lyrical and melodic. Originally a vinyl LP, Horns Aplenty was reissued on CD in 1995.(AllMusic)