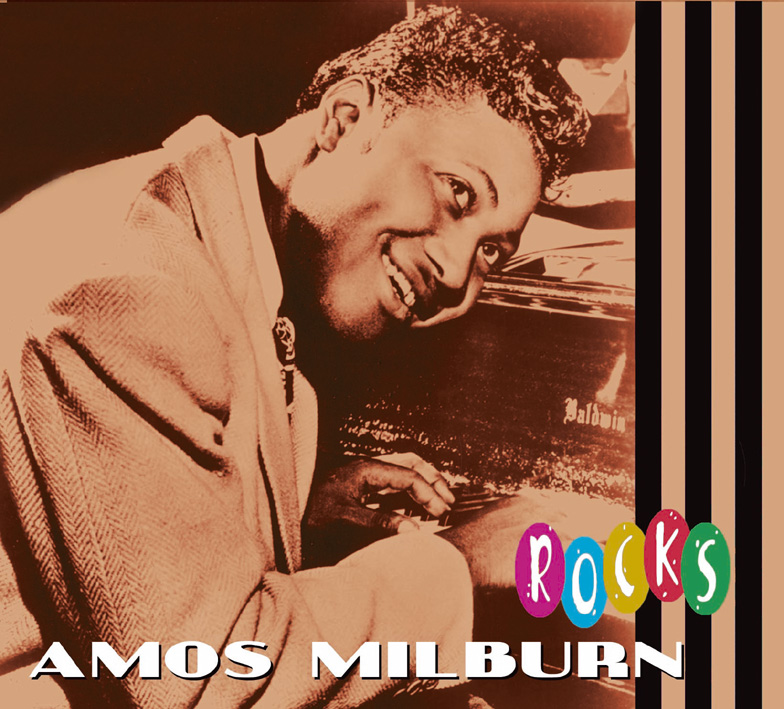 Asked to pinpoint his principal influences, New Orleans rock and roll pioneer Fats Domino readily volunteered the name of one fondly remembered individual above all others.

"His name was Amos Milburn," said the Fat Man. "I really liked his piano style."

As one of the premier R&B hitmakers of the postwar jump blues era, Milburn's romping boogie piano and uproarious odes to sex, booze and all-night partying anticipated the ascension of rock and roll. Amos was rocking the house for the Mesner brothers' Los Angeles-based Aladdin label long before Fats or any of his fellow revolutionaries came remotely near a recording facility.

That Milburn was left by the wayside when rock and roll exploded into the mainstream remains one of the great injustices of the period, since he was still turning out great platters (of his peers, only Big Joe Turner successfully crossed over to entice the new teen demographic). Some of Amos' last Aladdin records were cut at the Crescent City studio where Fats made his million-sellers, utilizing many of the same musicians.

Born April 1, 1927 in Houston, Texas, Milburn seems to have been born to pound the 88s. Legend has it that by the age of five, he'd figured out how to play Jingle Bells with one of his tiny fingers. But Yuletide chestnuts didn't hold young Amos' interest for long. His brother got him interested in pop material, and as time went on he was more into grooving on the jumping jive of alto sax ace Louis Jordan & His Tympany Five and the big band sound of Erskine Hawkins, as well as the holy boogie piano triumvirate of Pete Johnson, Albert Ammons, and Meade Lux Lewis. There was a strange stylistic dalliance when Amos billed himself as 'The He-Man Martha Raye' at local amateur contests, performing material by the zany musical comedienne (no word as to whether he won anything with that dubious act).

Although he was under-age, Amos joined the Navy in November of 1942, seeing plenty of Pacific action during his three years of World War II service. Whenever he came across a piano overseas in officer's clubs, he made the most of the opportunity. Returning to Houston after the war ended, Milburn got back into the swing of the local scene, forming his own combo.

Through the sibling dance duo Mack & Ace, Milburn landed a gig in San Antonio at the Keyhole Club. Owner Don Albert kept Amos around for awhile. One evening he was handed a note on the bandstand from talent agent Lola Anne Cullum, the wife of a Houston physician. When Milburn got back home, the two joined forces to work up original material in hopes of landing him a recording contract.

Armed with a couple of demos that Amos had made at a local radio station, the young piano man and his new manager got aboard a train and headed west to Los Angeles, where freshly minted independent R&B labels were just beginning to proliferate. Houston spawned its own group of indie imprints over the years led by Robey's Peacock Records (and eventually its Duke sister label), but when it came to immediate recording opportunities, the West Coast was really where it was at. By the end of the '40s, L.A. labels such as Imperial, Specialty, Swing Time, and Modern would be churning out national R&B hits on a weekly basis. 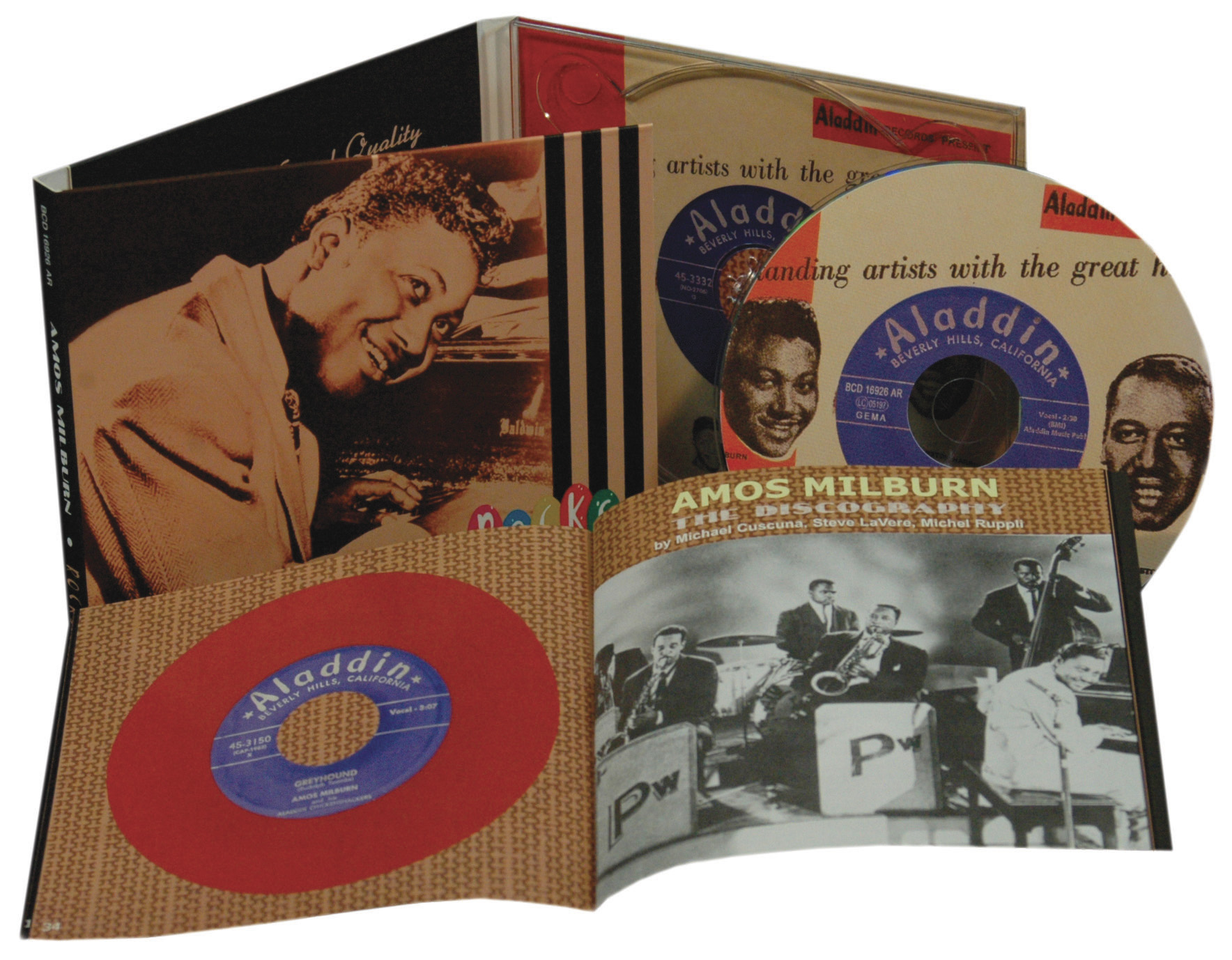 Modern boss Jules Bihari dug what Amos had to offer on the 88s (after all, boogie specialist Hadda Brooks was the company's flagship artist), but he couldn't come to financial terms with Cullum. So she brought her protege to Aladdin Records. The seemingly simple process of auditioning was complicated by label co-owner Eddie Mesner being laid up in the hospital when they arrived in town. Lola Anne wouldn't be discouraged, buying a record player and bringing it up to Eddie's hospital room to spin Amos' demos for his perusal. The end result was an Aladdin contract for Milburn at three times the bread that the Biharis offered.

The ambitious Cullum wasn't through steering promising Houston talent in the Mesners' direction. Next time she came out West, she brought guitarist Lightnin' Hopkins, who she'd met through Amos, and pianist Thunder Smith with her. They made their Aladdin debut date in November of '46, and while Thunder petered out fast, it was the start of an astonishingly prolific career for Lightnin'.

"She was a damn good manager. She was just like a mom," said Johnny Brown. "If you didn't have the right sort of clothing and everything, well, she'd see that you got it. She was that kind of person."  Cullum's savvy managerial efforts steered Milburn onto a lucrative career path, but she would eventually be aced out of her gig by Aladdin's braintrust.

Eddie and his brother, Leo Mesner, had launched their label in 1945 as Philo Records. They got hot right off the bat with Helen Humes' romping Be Baba Leba and the mellow Drifting Blues by guitarist Johnny Moore's Three Blazers, featuring the velvety vocals and sophisticated piano of Charles Brown (one of Amos' major early influences and later one of his very best friends). Electronics company Philco gave the Mesners a rumble about copyright infringement, so they renamed their label Aladdin. After one more session, the Three Blazers exited the label, leaving plenty of room on the roster for Amos to hop aboard.

"They went talent-scouting, looking for somebody else to replace me," said the late Charles. "So they found Amos Milburn, who was close to being me, like I was singing."  Charles would come back to Aladdin in late 1948 and proceed to cut a slew of solo hits, but by then Milburn was experiencing R&B stardom as well.