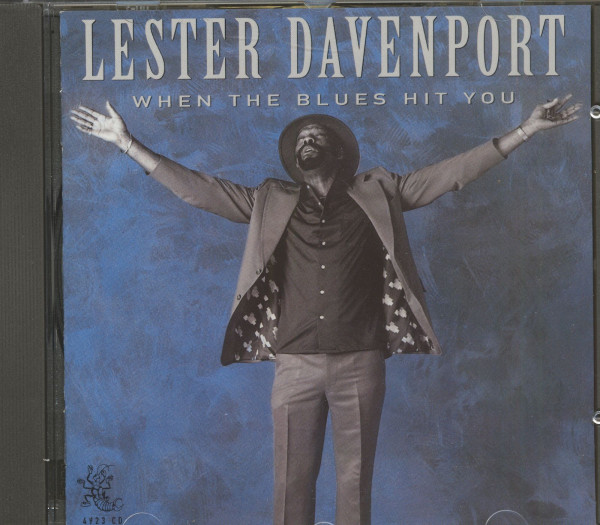 Lester 'Mad Dog' Davenport: When The Blues Hit You

WELCOME TO THE LIVING CHICAGO BLUES WORLD OF "MAD DOG" LESTER DAVENPORT.
IN RECENT YEARS CHICAGO HAS SUFFERED A STAGGERING loss of its traditional blues masters. Unlike days gone by. Buster Benton, Hip Linkchain and Junior Wells won't be per-forming at the club when you arrive for a late-night soul fix. And you can't hook up with the affable. shuffle-drumming Robert "Huckleberry Hound" Wright for a chat between sets, or have a drink anymore with Barkin' Bill Smith at B.L.U.E.S on Halsted. They are all, sadly, now part of blues history. But pop in I Smell A Rat. and step into Lester Davenport's vibrant, rocking West Side neighborhood for awhile. It's a magical place where blues giants like Jimmy Dawkins. Bob Stroger, Detroit Jr.-and the "Mad Dog" himself-still roam. "Mad Dog" Lester Davenport is yet another Mississippi-born bluesman who has worked years earning his musical stripes. Unfortunately. to date, Davenport's subtle artistry has been poorly represented on record. His only studio CD, until now, appeared on the Earwig label in 1991.

Many listeners, however. will recall hearing Davenport performing with the Kinsey Report in the 1980s and '90s. I Smell A Rat is really the product of a friendship that developed more than three decades ago between two men who, although they grew up near the same Mississippi Delta town of Tchula, never met until they began living in Chicago. Jimmy Dawkins was born Oct. 24. 1936 in rural Tchula, four years after Lester Davenport began life there. But here they are today, united professionally at this recording session after years of running around the city's West Side together visiting clubs, jamming and generally having a good time. "I met Jimmy after he came to Chicago, and that was in the late '60s. I think it was," Davenport said one evening in November. 2001. "We'd sit in with each other back then. but we didn't hang out too much together the '80s.

Then we got close and we started hangin' out. goin. places together. We would pretty much travel together. He would call me and tell me where somebody was playin' and he'd say, 'Well, I'll pick you up and we'll go and check 'em out,' you know, who-ever it might be. That was on the West Side." Davenport recalls that he first met Dawkins at The Squeeze Club. which was also a main hangout for guitar leg-end Magic Sam. Sam was a man with whom the two were mutual friends. "I knew pretty much all the musicians around Chicago during the '60s and '70s. I met 'em all at one time or another and I pretty much played with 'em all at one time or another," Davenport said. In the mid-1980s. Dawkins and Davenport went to Europe together. Davenport recalls that they returned to per-form there in the mid-1990s. "Me and Jimmy never was too close for me to know his personal business, you know what I'm sayin'. But in the music. we was buddies," Davenport said. "We shared ideas."

Davenport's parents were sharecroppers on a plantation until 1945. They then moved to Chicago. where Davenport soon met Big Boy Spires, who became one of his greatest influ-ences. "One of my first payin' gigs, you know, as a professional. where I was playin' with a band, was with Big Boy Spires. Davenport said. "At that time I had to be around 17. 18, 19, somethin' like that. I was too young to come into a tavern, but they would let me come in and play anyway. That was on the South Side. And also, my cousin. Big Smokey Smothers was playing out. I'm related to Big Smokey and Little Smokey Smothers. and Lee Shot Williams. So Big Smokey was playin' with Big Boy Spires at the time, so he gave me a job with Spires. so it was pretty good, you know. That was my first gig. That was in 1951." Davenport also supported himself for many years work-ing as a commercial spray painter. "I was playing music before I was spray painting," he said. " So I got married and my family had started getting bigger and I had to go to work. So I had to go into spray painting, and I did that for about 20 years.

Then I left and stayed away from it for about two years. and I went back and stayed for awhile painting until I decided that I would go back out and play music as a professional." Davenport played frequently with Bo Diddley in the 1950s. He's shared the stage with Kansas City Red, Homesick James. Nowlin' Wolf and Muddy Waters, as well. Davenport connected with Delmark Records courtesy of Dawkins. Dawkins. himself, got his start as a solo recording artist with the label in 1969 with his landmark debut album Fast Fingers (DELMARK 623). On / Smell A Rat. Dawkins is not only a player. but producer.

The musicians on this recording, with the exception of bassist Stroger, were selected by Dawkins. "I chose Stooge,: Davenport said with pride in his voice. "I chose Stroger because, in most of my playin', I plays off the bass man. So I chose Stroger myself. But Jimmy got the rest of the fellas." The laid-back Davenport acquired the ironic nickname "Mad Dog" because of his propensity for tearing up stages playing multiple instruments in his younger days. "I play about four instruments," he said. " And I'm talkin' about flu-ently! I can get a few tunes out of most any of what they call 'blues instruments'. But I play piano. guitar. drums. I play harmonica, you know. I play them fluently. My dad. he used to bang around on guitar, and I can play guitar, 'cause I was bangin' on his guitar. That's when he wasn't lookin'. I guess we all did that at one time or another! I used to hang broom wire upside the house and I used to make bottleneck music, you know. That's how I learned to play slide."

As for the musicians who round out this disc's stellar line-up. longtime Dawkins side guitarist Billy Flynn provides taste-ful foil to his old boss Dawkins' playing. Allan Batts, Sho Komiya and Jimi Schutte also complement the units you'll hear supporting Lester. I Smell A Rat is a dose of gutsy. diginified Chicago blues made by the masters. And after all the loss the music has experienced in recent years, this disc is truly something to treasure. - STEVEN SHARP, contributing writer, Living Blues magazine