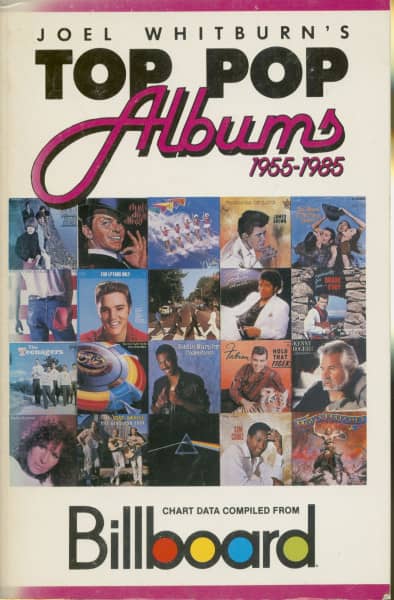 INTRODUCTION
After many years of additional research, I am pleased to wel-come music enthusiasts to enjoy my updated and revised pop album book. If patience is a virtue, then you readers certainly can claim this goodness of character, as a thirteen year wait is enough to test anyone's patience.

I do hope, however, that you'll find the wait was worthwhile as I have added many new fea-tures, symbols and notes to make this the best book I have ever published. In setting out to prepare for this new edition, I had one primary goal in mind — to obtain an original copy of every charted album for my research library. It seemed to be the only logical way to make every detail in this book accurate and to be able to expound on notes about the artists and the albums themselves. After nearly five years of searching (and an invest-ment of a small fortune) I was able to obtain a copy of every album listed in this book. After gathering the albums into my newly built library, the research began. One by one, each and every album was care-fully scrutinized and listened to, enabling me to accurately list the artist (or artists), album title, label and number, and to add many interesting and trivial bits of information about both artist and album. The entire project took over three years to complete, but I'm sure you'll agree it was well worth the effort.

While the book gives us an insight into 30 years of American culture, it is also a definitive account of the entire so-called rock era, and of the dates and popularity of the 14,000 albums that made Billboard's pop album charts during the past three decades. I hope you'll receive endless enjoyment from this greatly expanded edition. Let me hear from you if you wish to contrib-ute any interesting facts about an artist or album. I can prom-ise you that future editions will be published on a more fre-quent basis and that each edition will contain even more data about the artists, albums and music that have meant so much to each of our lives.
JOEL WHITBURN