The Prisonaires and The Marigolds 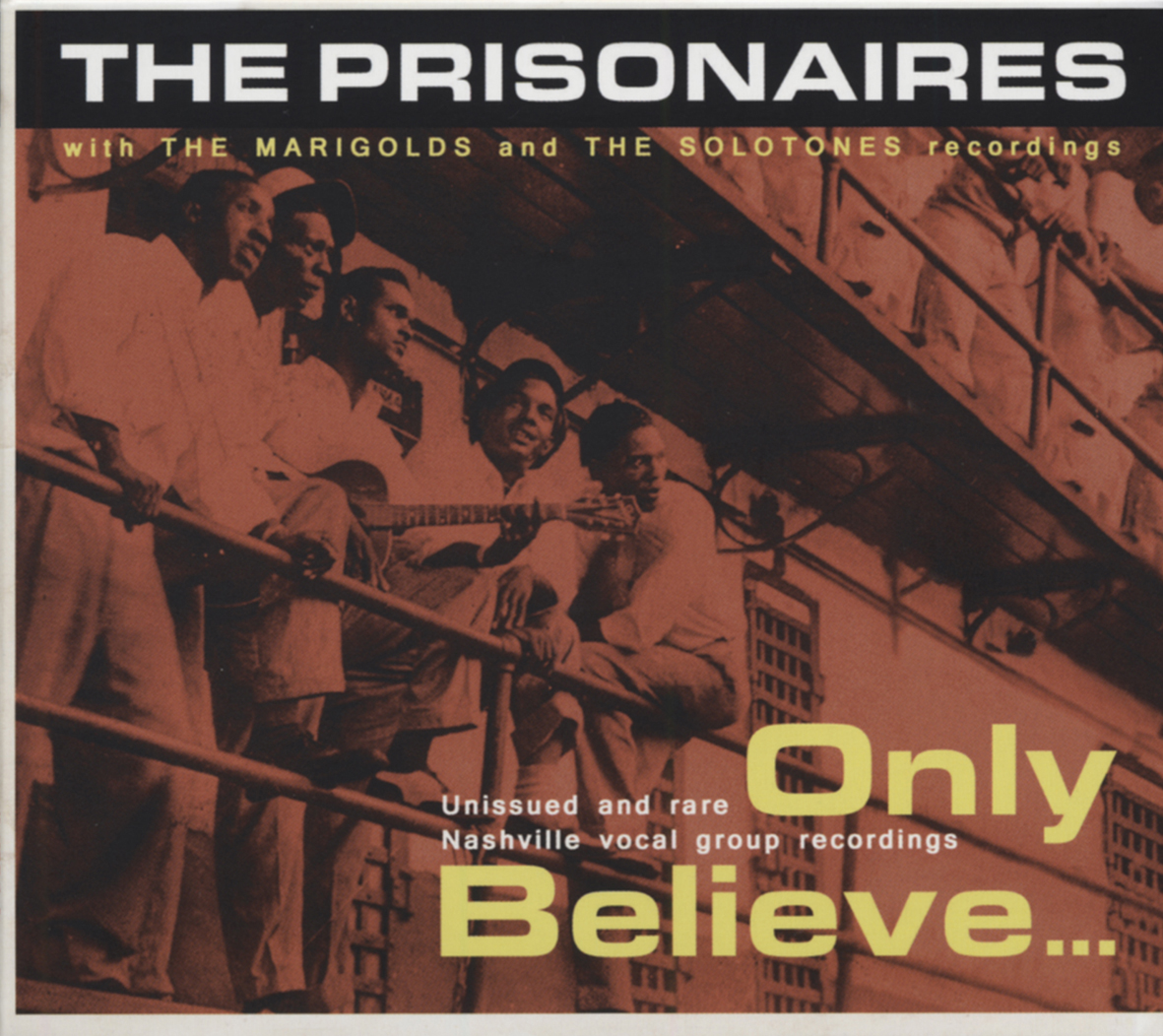 The story of the Prisonaires has always tested the boundary between probability and implausibility. It started when five prison inmates from the Nashville State Penitentiary formed a singing group in the 1940s, and then became celebrities around Tennessee when given leave to perform outside the prison on stage and at radio studios. In 1953 they got themselves onto Sun Records in Memphis with the help of the Governor of Tennessee. Their best-known song, Just Walkin' In The Rain, became an international hit in 1956 when recorded by pop singer Johnnie Ray. Its co-songwriter, Johnny Bragg, the Prisonaires' lead singer, became a celebrity while still in prison and went on to record with other vocal groups before having a fascinating solo career.

But there is an important hidden chapter in the story of the Prisonaires. This 28 track CD now reveals an astonishing 11 songs from long-lost 'concert' performances - featuring several group members not heard until now. The 'lost' Prisonaires tapes reveal an even wider range of vocal harmonies and musical abilities, influences, and styles than the Sun recordings.

There are hidden aspects to the Prisonaires' Sun career, too, and we include here several previously unissued versions of songs from the Sun sessions. To complete a comprehensive journey through 1950s vocal group styles we've added all the recordings lead singer Johnny Bragg made with another group of prisoners, the Marigolds.

With this CD you'll complete your Prisonaires collection – assuming you already have Bear Family's BCD 15523, 'The Prisonaires' - and you'll have the complete works of the Marigolds, also known as the Solotones, on Excello Records.

THE STORY SO FAR

The singing group that became the Prisonaires was formed sometime after 1940, the year that tenor singer Ed Thurman and baritone singer William Stewart were sentenced to join the inmates of the Tennessee State Penitentiary in north east Nashville. By 6 May 1943, when 17 year old Johnny Bragg was sent there with multiple life sentences for rape, Thurman and Stewart were leading one of several loosely aggregated and nameless singing groups whiling away their time in the Pen. Bragg was a budding tenor himself but it was a little while before Thurman asked him to join the group, several years before Bragg became the lead tenor, and several more before the group had a name. Bragg later told researcher Bill Millar: "I joined a group back in 1944, and I didn't know too much about background singing at the time... but I just went in there and started singing, and the people who had said I didn't know about singing, they said 'you know everything'  ... and I became the lead tenor singer.  I guess it was just a gift from God." 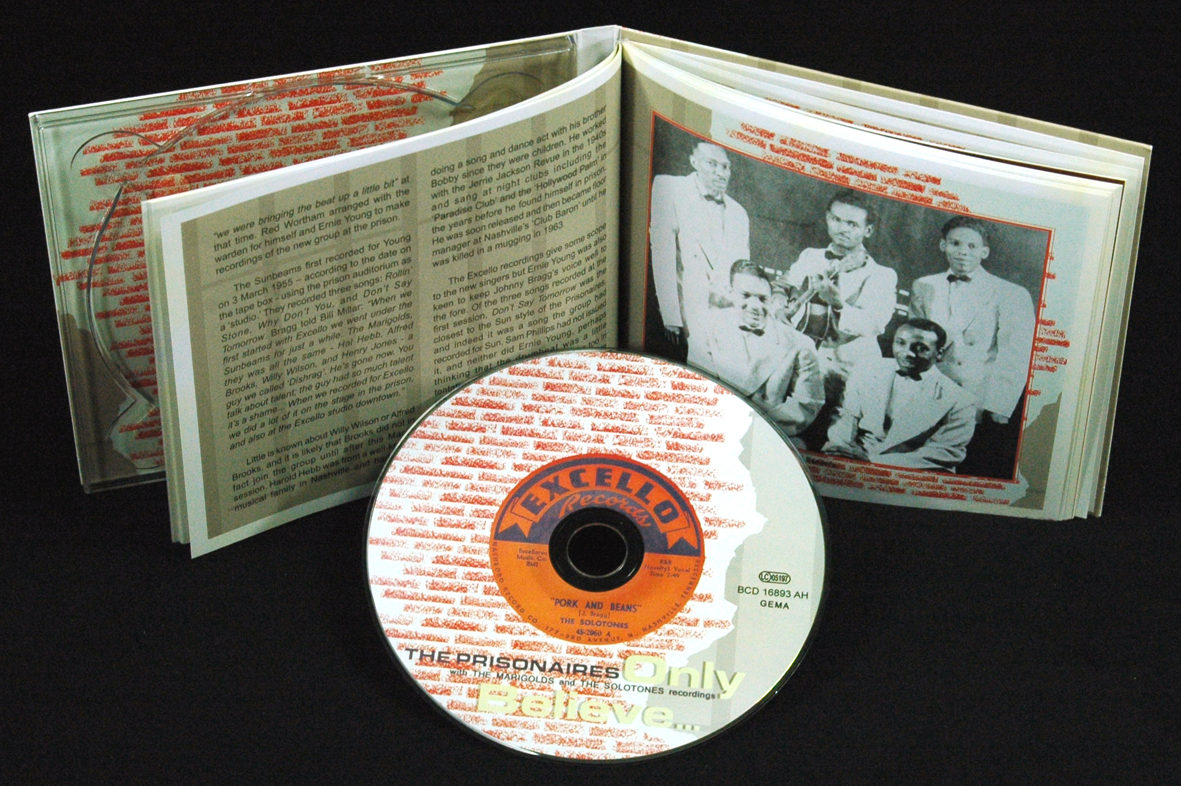 Johnny Bragg's biographer, Jay Warner, asserts that Bragg was born on 6 May 1926 though his Penitentiary records said 18 January 1926, his social security records said 1925, Bragg himself once said it was in 1929 and then told Bill Millar "I was born right here in Nashville on Herman street back in 1932."  He told Colin Escott his birth was never registered and that he used details from a brother's birth certificate. Census data for 1930 lists Bragg as aged four years to his brothers' six and seven years. Johnny's mother had complications with his birth and she died as he was delivered. He told Millar, "I was born blind and I stayed blind for seven years and they tell me that the doctors used to sit me on top of the tables and I'd sing to the doctors." He gained a keen appreciation of sound and his interest in singing dates back to that time. He said: "The first music I believe I ever tried to sing was a song called blue heaven, you know 'My Blue Heaven', baby made three and Molly and me and so on... and there was another song called 'What you gonna do when the rent man come around' back in the Depression days, you know... The greatest thing that really influenced me to want to do something was the Ink Spots, Bill Kenny... his voice was sweet, kind, you could understand everything he was trying to say."

Living his early life with relatives, Bragg apparently spent his time alternately doing neighbourly deeds and running and fighting with a local gang. He attended school in north Nashville – just a few blocks from the penitentiary – as far as sixth grade but he told Warner, "I didn't get much education. I didn't care anything about it. Far as I'm concerned, education wasn't nothing, you know, just a thing called Joe". Instead, music was his thing, as far as anything constructive was.

Educated or not, Bragg had developed a real interest in composing songs by the time he joined the prison group. He would practice them day and night, memorably singing with a bucket over his head to focus the sound and reduce the noise for others. For some years he stored songs in his head until he was ready to share them with his fellow singers but by the early 1950s he would have them written out properly by other inmates such as black trumpeter George Williams. He also spent time with another maturing songwriter, Robert Riley, and it was Riley who collaborated with him on his signature song, Just Walkin' In The Rain.

Around the time Rain was being written in 1953 two events combined to start the improbable sequence of events that unfolded for the not-yet-named prison singing group. This now comprised Bragg, Thurman, and Stewart along with another tenor, John Drue, and bass singer Marcell Sanders. The first event was the election of Frank Clement as Governor of Tennessee, and the other was a visit to the prison by radio producer Joe Calloway and recording engineer and publisher Red Wortham.

Frank Clement was a reforming Democrat who appointed James Edwards as Warden of the Penitentiary with an enlightened plan to connect prisoners with their local community, to encourage rehabilitation as much as punishment, and to improve the prison's image. Clement and Edwards took up their respective jobs in January 1953 and within a few months had invited local radio producer Joe Calloway of WSIX to come into the penitentiary to make a programme promoting their vision of prison life. One of the things they stage-managed for Calloway was a performance by Bragg and his group in the dining hall. Calloway was duly impressed and arranged to include the group in broadcasts from the prison that showcased the talent of prisoners. He then agreed with the warden that the group would travel under guard to the studio of WSIX in Nashville to give a weekly radio show.

Calloway did something else, too. He contacted a recording engineer and promoter, Red Wortham. According to Wortham: "I had a little recording studio at Fourth and Union and it was right around the corner from radio WSIX where the disc jockeys were my friends. A jockey named Joe Calloway stopped by the studio one day in 1953 and wanted me to go to the prison. He said 'we got a group out there that sings real good and I think you need to go and listen to those boys because they're good'. He came actually two or three times and I didn't go. But the third time I went out there with Joe when he was broadcasting a show by prisoners from the stage of the auditorium they had out there. I said to them 'I like what you do and I'll come out and record you.' So I went in there with a Magnecord tape machine and we made recordings with the idea to get them out on records."

For all this, the group needed a name and it was now that 'the prisoners' became 'The Prisonaires'. Johnny Bragg said that he named them although Red Wortham told me: "They didn't call themselves the Prisonaires then. I was the one that named them the Prisonaires. They had another name they were using,

I can't remember, but it was a name that was already taken. Someone else had that name so we couldn't use that for records. Joe Calloway, HE is the man that is responsible for Johnny Bragg and the Prisonaires because if he hadn't taken me out there nobody would have known about them."

The WSIX show led to another show on the local black-oriented station WSOK organised by radio announcer, promotion man and recording artist George White. It also led to the first of what became hundreds of performances by Bragg and the group at local churches, civic events and fairs, and for dignitaries visiting the Governor's mansion. The booking role was taken by prisoner Bob Brassell who also directed the prison's variety shows.