Just between you and me 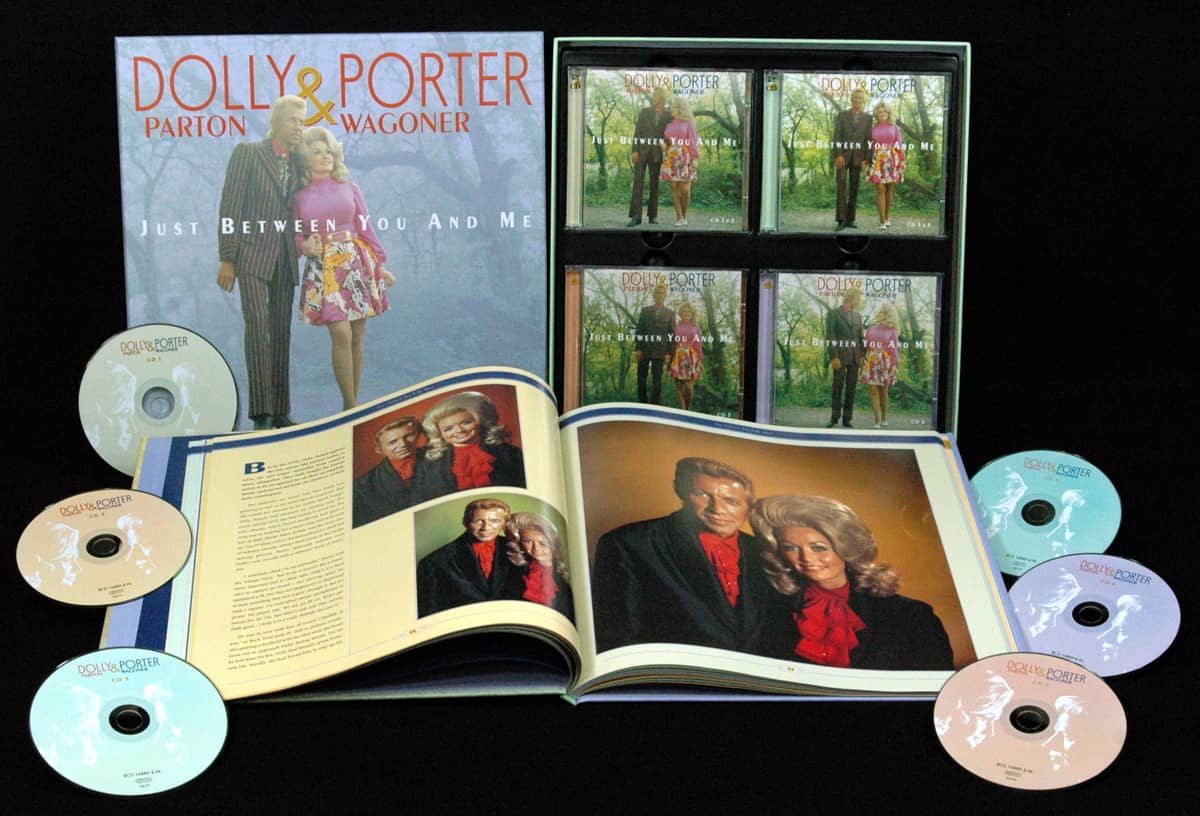 In the pantheon of great male-female country duet teams, three acts proudly stand center stage: George Jones and Tammy Wynette, Conway Twitty and Loretta Lynn, and Porter Wagoner and Dolly Parton, the latter rising in 1967 (predating their rivals by roughly four years) and lasting through seven years and thirteen albums, some released even after the pair no longer performed together.

Each of the above pairings had its own distinctive characteristics. If George and Tammy communicated drama and passion, and Conway and Loretta old-fashioned sass and fun, Porter and Dolly focused on a mix of playfulness and poignancy. Though RCA staff member Bob Ferguson is listed as their producer (with Jerry Bradley handling overdubs years later), Ferguson's credit was only a formality. (RCA insisted on using only 'in-house' employees.) Porter was the real producer and mastermind of the sessions--Ferguson was generally not even in the building—and the duets point up Porter's width of musical scope and greatness as a producer.

From the beginning of their professional relationship, Porter and Dolly concentrated on smart song choices, recording music that flirted outside the strict country lines (their first release, The Last Thing On My Mind, from folksinger Tom Paxton, worked a folk-acoustic vibe with a lyric that referenced a subway rumbling underground, and earned them a top-ten hit), even as they were always quick to mix in non-commercial songs of real tragedies, family estrangements, gospel fervor, and Dolly's gothic, Appalachian-soaked ballads of sick or dying children (Jeannie's Afraid Of The Dark, Silver Sandals, Malena, which Porter laced with mournful recitation). By the second year of recording, they were recording such wide-ranging material as Dan Penn's The Dark End Of The Street, which oozed Memphis Soul, and the social commentary of Tom T. Hall's I Washed My Face In The Morning Dew.

However, they wrote much of their material themselves, with Porter immediately showcasing Dolly's songs on the first sessions. (Her magnificent heartbreak ballad, Put It Off Until Tomorrow which she co-wrote with her uncle, Bill Owens, and which Bill Phillips had already taken to number six on the charts, was on the schedule for their third day of recording in the fall of 1967.) They instinctively knew just how far to push their subject matter, how vulnerable to take their delivery, and what that worked well for their two voices. In short, when they stood before a microphone, they created magic. 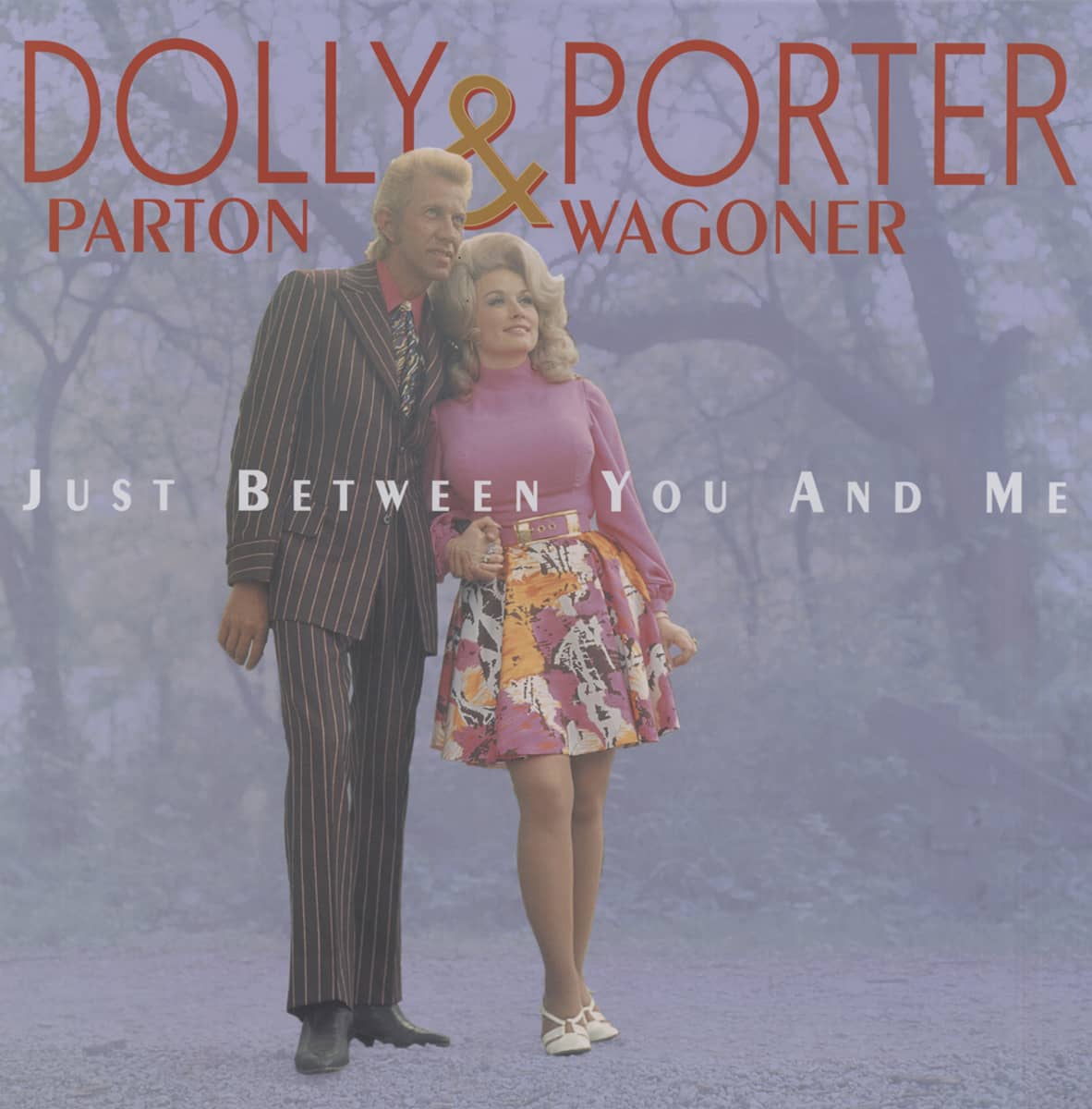 Where so many duet singers follow a predictable pattern, Porter and Dolly mixed things up. If Porter was content to let Dolly handle lead, he would often trade lead melodic lines with her to keep the sound fresh. Then he supported her with harmony on the chorus to give the song an extra lift. As a solo singer, Porter's earnest baritone could soar to a sustained mid-to-low tenor, and then plunge to its lowest depths, just as Dolly's gossamer soprano could laser in on a straight-ahead melody for storytelling, then leap to ethereal trills and frothy curlicues. But as a team, their hand-in-glove, close-fitting harmonies became their trademark. Listeners ate it up.

With the release of their first album, 'Just Between You And Me'in 1968, it was the tightness of their sound that impressed almost everyone who heard it. The naturalness of their vocal blend--what Dolly called "family" and Porter referred to as "blood harmony"--was equally matched by their personal chemistry and the glitter and glitz (Dolly called it "gaude") of their stage costumes. However over-the-top Porter's rhinestone Nudie (and Manuel) suits seemed to some, to country people of their generations, Porter and Dolly's onstage finery represented a symbolic act of shaking the farm dirt off their boots and stepping into the modern world. And beneath Dolly's flash and "trash," as she called her look, beat the heart of a hillbilly savant.

"The quality of their sugar-and-vinegar duet work is often underestimated," the late Martha Hume observed, "because their rhinestone-encrusted appearance was so spectacular. But their success made 'Porter 'n' Dolly' a household phrase."

Duet teams were nothing new in country music when Porter and Dolly first met at RCA's Studio B on October 10-12, 1967 to lay down twelve songs. The 1930s produced a plethora of harmony duos, from the prominent sibling acts of Bill and Charlie Monroe and the Carlisle Brothers (both of which later parted to pursue separate careers), to the married couple of Lulu Belle and Scotty Wiseman, who logged a quarter century on the National Barn Dance, the popular radio show over Chicago's powerful WLS. Other influential duos followed in the 1940s and 1950s, including the Louvin Brothers and the bluegrass teams of Flatt and Scruggs and the Stanley Brothers.

However, the male-female combination allowed not only for novelties and folk songs, but in the late 1960s, modern songs of love conquered and divided. In January 1968, when Porter and Dolly recorded Jerry Chesnut's pathos-ridden Holding On To Nothin', Porter suggesting they draw out some of the syllables to amp up the pain of the lyric, the two singers established that they had come to stay. Critic John Morthland wrote that the performance was the most dramatic, urgent, and sorrowful of their collaborations to date. From this one recording alone, Morthland declared, "They made all the other duet teams sound like footnotes."

Today, writer-musician Jon D. Weisberger, reflecting on the George-Tammy, Conway-Loretta, Porter-Dolly triad, points out that the bluegrass music training Porter received with one of his first bands, the Blue Ridge Boys, helped him wring the utmost emotion from a vocal. "He might not have been the only one in those duets to use the low tenor," Weisberger says, "but he used it more consistently and more smartly than just about anyone else in a male-female country duo until Royce Kendall [of The Kendalls] came along. 'Holding On To Nothin'' is about as good a duet record as you'll ever hear."

The Country Music Association agreed that the two had The Right Combination, as Porter titled a song and album from 1972, voting them the Vocal Group of the Year in 1968, 1970, and 1971. But after that, Conway and Loretta (After The Fire Is Gone) and George and Tammy (We're Gonna Hold On) were hot on their trail, singing songs that suggested a true-life romantic entanglement, which was certainly true in the case of Jones and Wynette, who had become husband and wife.

Though they were nearly twenty years apart in age, enough to make them more like father and daughter than contemporaries, they initially had an easy understanding that made them seem, as they wrote in a duet they recorded in late 1970, Two Of A Kind. Both Porter and Dolly had come up hard, with primary knowledge of small-town life informed by the poverty of mountain and rural isolation—Porter in West Plains, Missouri, in the Ozarks region, and Dolly in the coves and hollers around Sevierville, Tennessee, in the Great Smokies. They'd also been steeped in hardcore country and old time music. "Dolly," wrote Porter's biography Steve Eng, "was a throwback to centuries-old mountain singing, with a strange voice that her mother attributed to a case of burst tonsils."

By now, Dolly's biography is well known. Born in Locust Ridge, Tennessee on January 19, 1946, she grew up in an impoverished, but loving East Tennessee family, headed by a wise mother, Avie Lee Parton, who drew on Biblical stories and the fantasy of "stone soup" to help get her children by. The "magic of believing," as Dolly calls it, seems to have been a convenient escape from the stark drabness of it all, and at age five, she wrote her first song, Little Tiny Tassletop, about a corn cob doll. By seven, she was writing what she called "serious" songs.

"Mama was just always fascinated that I could rhyme stuff being so little," she remembers, "but my mother wrote, and all of her people used to write and sing, so I was around it all of my life. I loved it and kept on doing it."