I’M GONNA BE A WHEEL SOMEDAY

“I’m gonna be a wheel someday, 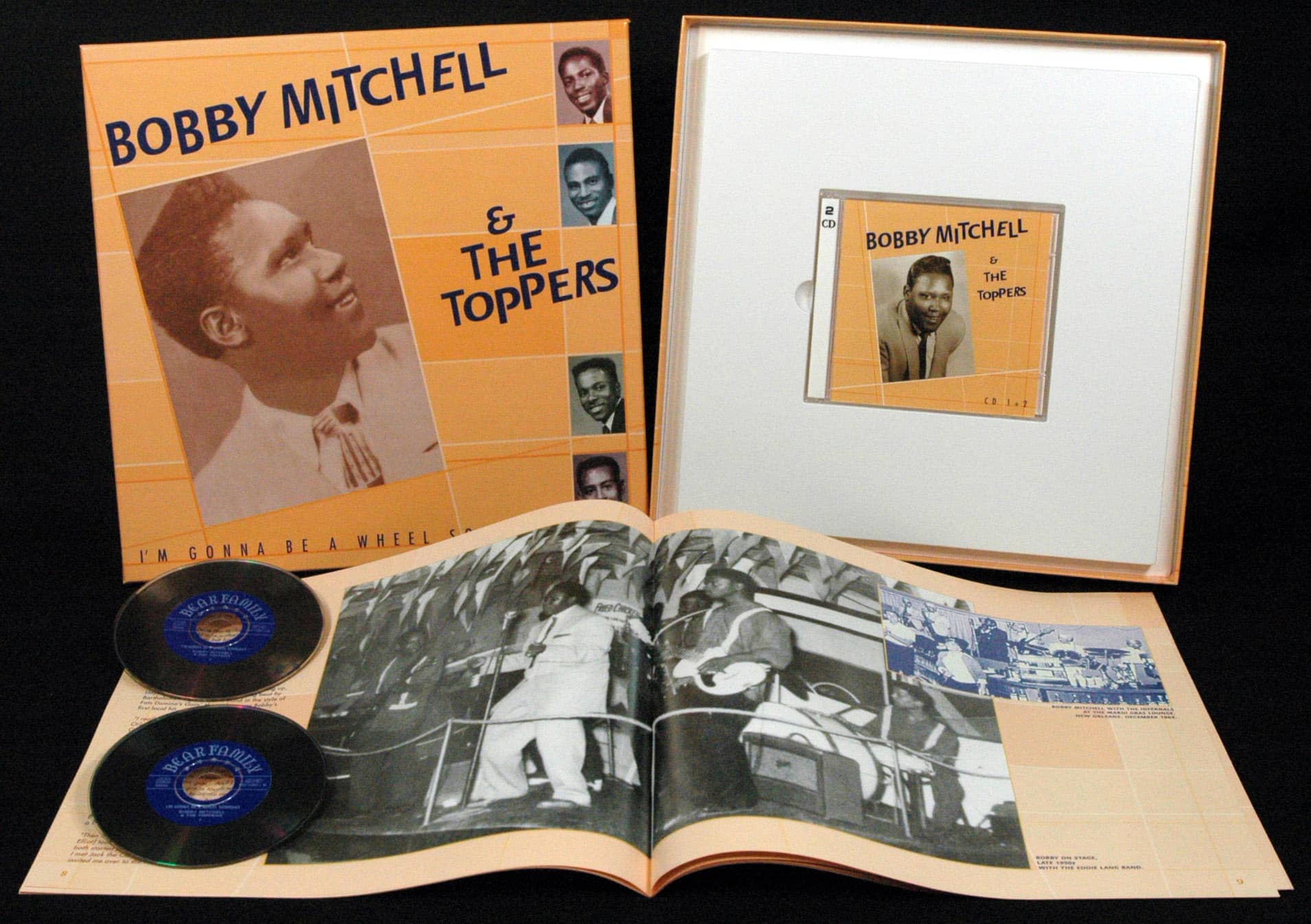 he words that became a rock ‘n’ roll classic nearly 40 years ago were first released by a man who ironically had little connection with those words of vehicular cool.  Bobby Mitchell never came close to becoming a ‘wheel’ in the record business.  A singer with a powerful tenor-baritone voice and a style somewhere between his two Imperial Records labelmates, Fats Domino and Smiley Lewis, Bobby was still a beloved favorite son of rhythm & blues fans in New Orleans.  Record collectors of both New Orleans R&B and vocal groups worldwide who were able to find his records have long recognized his greatness.

On a personal level, Bobby was always the opposite of the put-down the song describes.  A family man, he and his wife Marcia raised eight children.  Until his death in 1989, Bobby was a walking, talking, singing goodwill ambassador of New Orleans rhythm & blues.  He was an integral part of the revival  of interest in the music in the 1980s, from his performances at shows including the New Orleans Jazz and Heritage Festival to his long-running radio show on WWOZ.  Appropriately, Bobby’s face graced the first ever cover of ‘Wavelength’, the New Orleans music magazine, in November 1980.

Bobby’s story starts out on wheels on August 16, 1935, when he is born in a taxicab at Brooklyn and Houma Street, next to the Ferry in Algiers, Louisiana across the Mississippi River from New Orleans.  Like his birth, Bobby’s childhood is not easy, as he toldJeff Hannusch in the first issue of  ‘Wavelength’.

“I was raised up on the river batch [batture]. I had eight brothers and eight sisters.  Fishin’ was our livin’.  I used to cut wood and sell wood before I even went to school.  I was the second oldest, so I had to be one of the supporters.  My great-aunt helped to raise me, and she told me ‘I want you to be a man, and a man completely.  You don’t have to be out here stealing because you know how to work.’  So when I was about 10 years old, I managed to get me another little job after school delivering liquor, for a liquor store.  I used to sing around the liquor store and a lot of people used to give me nickels and dimes.

“Well a lot of people said ‘Bobby, you’re  great, why don’t you try and do something?’  Well at that time I was strictly a religious kid; I just wanted to get along and make something out of myself.  I didn’t want to get into music; I wanted to work and get away from there!”

Bobby joins the football team at L.B. Landry High School, but after getting his knee ‘busted’, he joins the chorus instead, where the teacher, Margie Dickerson, is duly impressed with his stentorian vocals.  She has him singing solos on the show-stoppers You’ll Never Walk Alone and Ol’ Man River.  By late 1952, Bobby and a dozen girls and guys in the chorus and band start a group called ‘The Louisiana Groovers’. 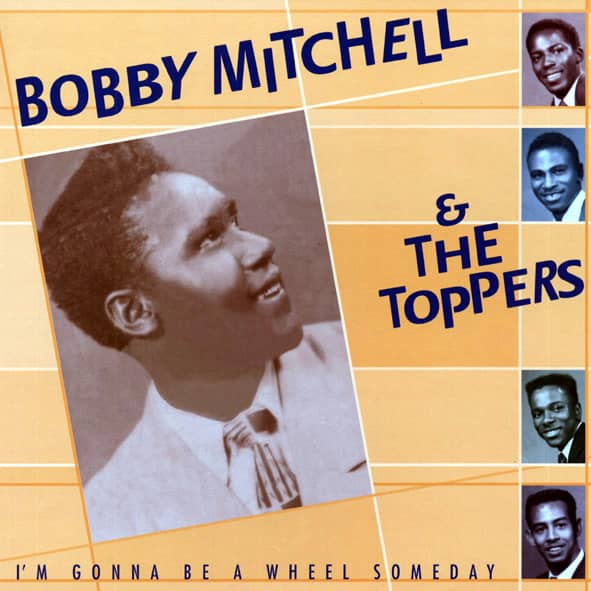 “And so happened I wrote a tune which was ‘One Friday Morning’, which was a valentine song, also the song for L.B. Landry High School.  We talked to Mr. Neely, our history teacher,  about it, and Mr. Neely said the best thing for me to do is to try and cut us a record.  He liked the words and we talked to Mr. Martin, the librarian, and he recorded it on a tape recorder.  He brought the tape to Dr. Daddy-O at that time, who was at Dryades Street at the radio station.  He auditioned us at radio station WMRY.”

“Bobby had written a song,” says Lloyd Bellaire, “and I formed the group, the Toppers, to background him.  I always did like group singing and good harmony, with a deep bass beat background, a good bass movement.  That’s the things I would focus on. Gabriel was strictly a piano man, he could really play that piano.  We counted on him for rehearsals.  When we did [gigs], all we had was Gabriel on the piano.”

“So I talked to Mr. Neely about it again and he introduced me to Dave Bartholomew.  And I went there at the San Jacinto one Carnival Day and I met Dave.  And he told me the only way he would record me is through Imperial and first I had to make some demos at J&M Studios.  Dave said, ‘Well, we’ll give you a try.’  So it was about three weeks after that we went to Cosimo’s studio on Rampart Street.  So when we got there Dave Bartholomew told us, ‘We gonna cut!’  We said, ‘Cut?’  We didn’t know what he was talkin’ about.  And I’m gettin’ nervous, he must be gonna cut somebody, ‘cause he sure ain’t gonna cut me!”

“We were looking for groups,” says Bartholomew. “So we recorded Bobby Mitchell with the Toppers.  They never did sell anything too much, but they made a little noise so we just kept on trying thinking maybe one day we might get something.“

That's how Bobby Mitchell came to Dave Bartholomew's attention, by being in the Toppers right out of Landry High School. While walking back and forth to the studio to practice with Dave Bartholomew and his band, the group come up with their first song.

“Lloyd said, ‘Well, I’m tired of walkin’,’ ‘cause we used to have to walk seven or eight miles a day to go to the studio.  To come from across the river all the way down to Rampart Street to Cosimo’s studio at the time.  And we just ride the ferry, walk over and walk back.  Everybody said we were gonna do Dixieland, that’s where the idea came from, ‘cause we was all in the middle of the street and was actin’ like we was paradin’ and all.  We had to describe the same feeling we were havin’ then.  We were havin’ fun.  During those days, Cadillac was the idol of everybody, so we had to use Cadillac.  And we was a bunch of  big shots!  Like in French--‘Bon temps roulez’-- we just put it ‘Rack ‘em Back,’ as a hip name.  ‘Rack ‘em Back’ just meant having a lot of fun.