Start Movin' In My Direction 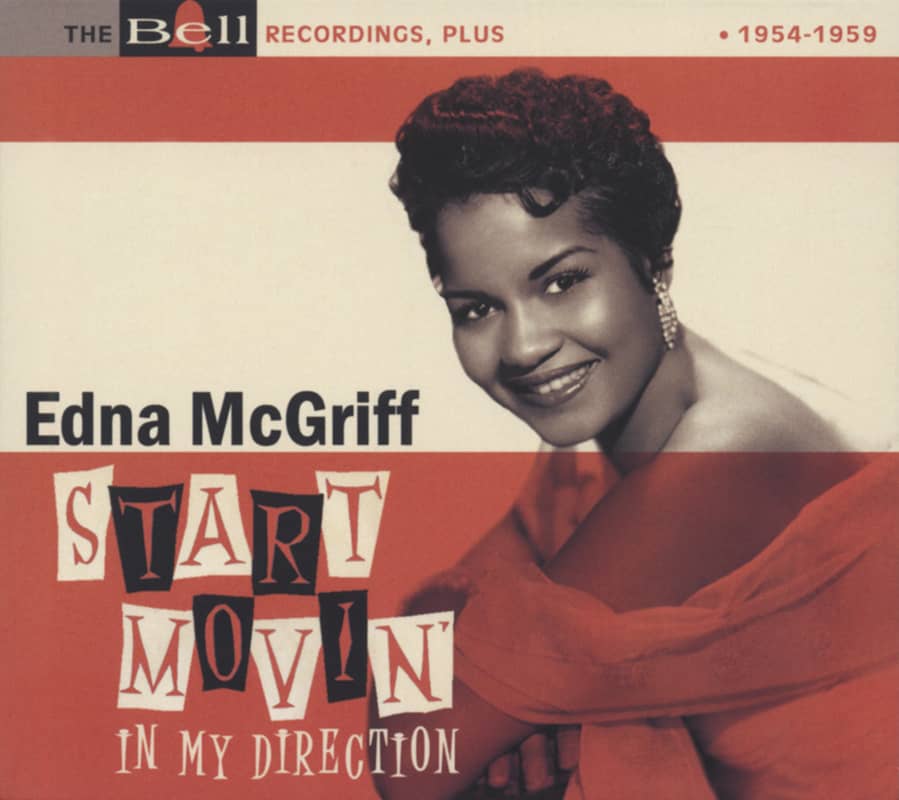 Although she only scored one major R&B hit in 1952 in cahoots with veteran tenor saxman Buddy Lucas, Edna McGriff was a prolific recording artist for more than a decade. That solitary hit came when the young singer was only 15 or 16 years of age (at least that's what the trade papers reported), so Edna had plenty of time to score more. The cards didn't fall that way, even with a short stint at Capitol Records at the tail end of her career that might have rejuvenated her commercial fortunes had luck been on her side.

The Harlem native, ostensibly born in 1935, was a student at Washington Irving High School in lower Manhattan (its alumni included actress Claudette Colbert) and a talented pianist in addition to her vocal ability.  Reportedly Edna brought some of her own compositions to her neighbor, popular New York deejay Jack Walker, who became her mentor. The June 5, 1952 issue of'Jet' magazine noted that Walker coached her for a year after she first came to him, then got her a contract with Jerry Blaine's Jubilee Records, one of New York's better-known independent R&B labels and home to The Orioles, then riding high as one of the top vocal groups in the field, as well as house bandleader Lucas.

Oddly, the June 23, 1951 edition of 'Billboard' reported that New York-based Apollo Records, one of Jubilee's rivals, had just signed 15-year-old Little Edna McGriff to a longterm contract, citing the same two songs that would constitute her Jubilee debut as being on her Apollo itinerary along with one called Rain. Veteran tenor saxman Budd Johnson was slated to lead her Apollo band, but when the smoke cleared, McGriff wound up recording for Jubilee a scant four days after that issue of 'Billboard' hit the racks.

Lucas wasn't in charge of the combo for Edna's first session on June 27, 1951. That honor went instead to trombonist Benny Green, who had been cutting for Jubilee as a leader since 1950. Green's jazz-steeped all-star session crew also included pianist Billy Taylor, bassist Tommy Potter, and drummer Art Blakey. The swinging Note Droppin' Papa was paired with a torchy Come Back as her Jubilee debut, Edna sharing authorship on both sides with Walker. Nothing about her assured, sophisticated vocal delivery suggested she was only in her mid-teens.

After that, Edna's Jubilee activities would be inextricably intertwined with those of Lucas. Born August 16, 1914 in either Rackville or Pritchard, Alabama, Alonza W. Lucas grew up in Stamford, Connecticut, starting out on clarinet in his adolescence before switching to tenor sax. Buddy cut his performing eyeteeth in local clubs before making his mark on the New York scene of the late '40s. Jubilee brought him aboard only a short time before McGriff; his first single with his All Stars showcased the bespectacled saxist's hearty vocals on the jumping Soppin' Molasses and a slightly mistitled Whoppin' Blues (they meant Whoopin').

1952 would be a terrific year for Edna and Buddy. His next solo single with his newly renamed Band of Tomorrow was a dreamy instrumental interpretation of the pop standard Diane that broke in early February and vaulted to #2 R&B for a week in April on 'Billboard's' 'Juke Box' list. Undecided, a houserocking instrumental update on trumpeter Charlie Shavers' 1938 jazz classic, adorned the flip.

At the same time Lucas was enjoying his first taste of fame, Edna's Jubilee encore Heavenly Father, penned by the singer, blasted up the charts, peaking at #5 on the same 'Juke Box' chart and #4 on 'Billboard's' 'Best Seller' list (the rocking I Love You, a McGriff/Lucas/Walker co-write, was situated on the opposite side). Heavenly Father was a sweet, innocent prayer for an absentee lover that no doubt resonated with a female demographic pining for soldiers away fighting in the Korean War. The touching ballad saw Edna backed by Buddy and his Band of Tomorrow, his softly mooing sax buttressed by prominent organ on the intro and a curious Hawaiian guitar that wound its way through a lot of Jubilee's 1952 output.

'Billboard' tagged Heavenly Father as a Territorial Tip in New York on March 8. The song cracked the R&B hit parade the next month, and by May the publication was reporting the song was so hot that pop covers were quickly stacking up: Dolores Hawkins and The Four Lads for OKeh, Fran Warren on MGM, and Evelyn Knight on Decca. All that rapid-fire cover action stifled any hope of Edna's original making a crossover move but should have earned her substantial songwriting royalties. 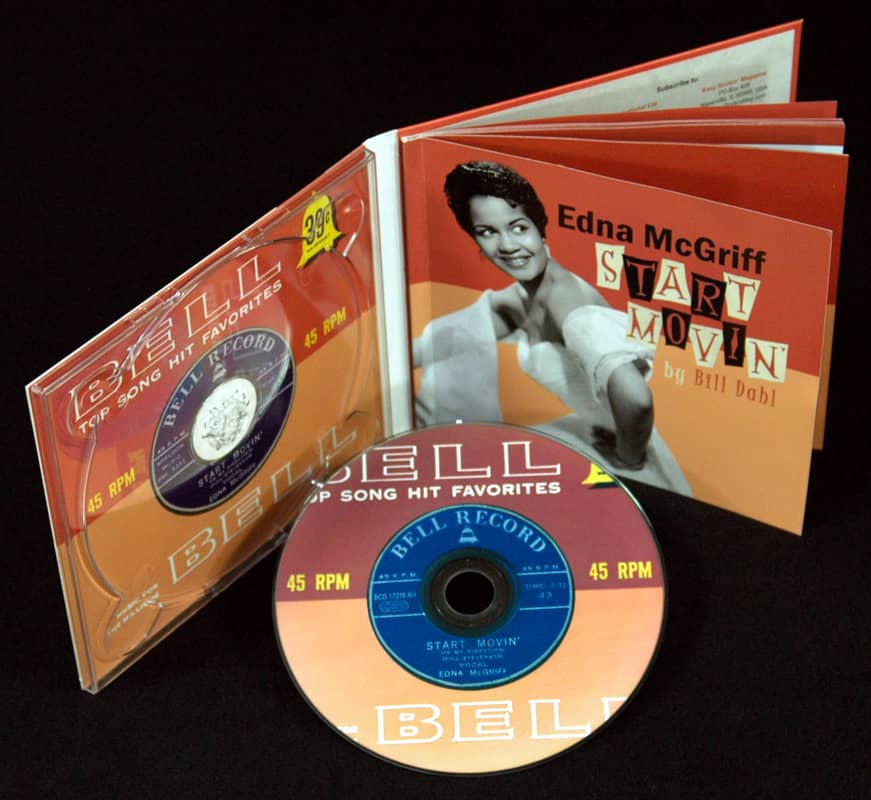 Buddy had a personalized treatment of another pop oldie, Embraceable You, on the shelves in April, well before Jubilee unleashed Edna's followup, the smoldering It's Raining (another McGriff/Walker collaboration done at the same date as Heavenly Father) b/w a mellow Not Now. But commercial lightning failed to strike twice. On June 5, 1952, 'Jet' magazine reported that "Harlem's 16-year-old singing sensation" was slated by MGM for a screen test, but if anything ever came of it, no celluloid evidence exists (she remained a student at Washington Irving). According to 'Jet,' Heavenly Father had sold more than 200,000 copies over a three-month span.

Hoping to squeeze more hits out of his two top acts, Blaine teamed Edna with Orioles lead tenor Sonny Til at a June 11, 1952 session at New York's Beltone Studio with Lucas' house band on hand. Six duets were waxed; Jubilee released the first two the next month. Once In A While and I Only Have Eyes For You were familiar Tin Pan Alley chestnuts, but the strategy didn't click commercially. Ostensibly while on summer vacation from school, Edna hit the road that July with alto saxman Tab Smith and turbaned tenor saxist Lynn Hope's orchestra on a series of 22 one-nighters across the South booked by Shaw Artists.

Lucas remained in musical support of McGriff (the Band of Tomorrow billing was gone) on her next Jubilee solo single, issued that September. Both sides of Pray For A Better World b/w In A Chapel By the Side Of The Road sought to attract the same quasi-spiritual interest, but buyers didn't respond. 'Billboard' carried a blurb the next month raving about a new McGriff single pairing My Baby's Coming Home and My Favorite Song, claiming "if this two-sided rocket doesn't crash her thru into the pop stars it will surprise everyone who has heard it." Released in a different numerical series from the rest of McGriff's Jubilee output, that rocket never ignited.