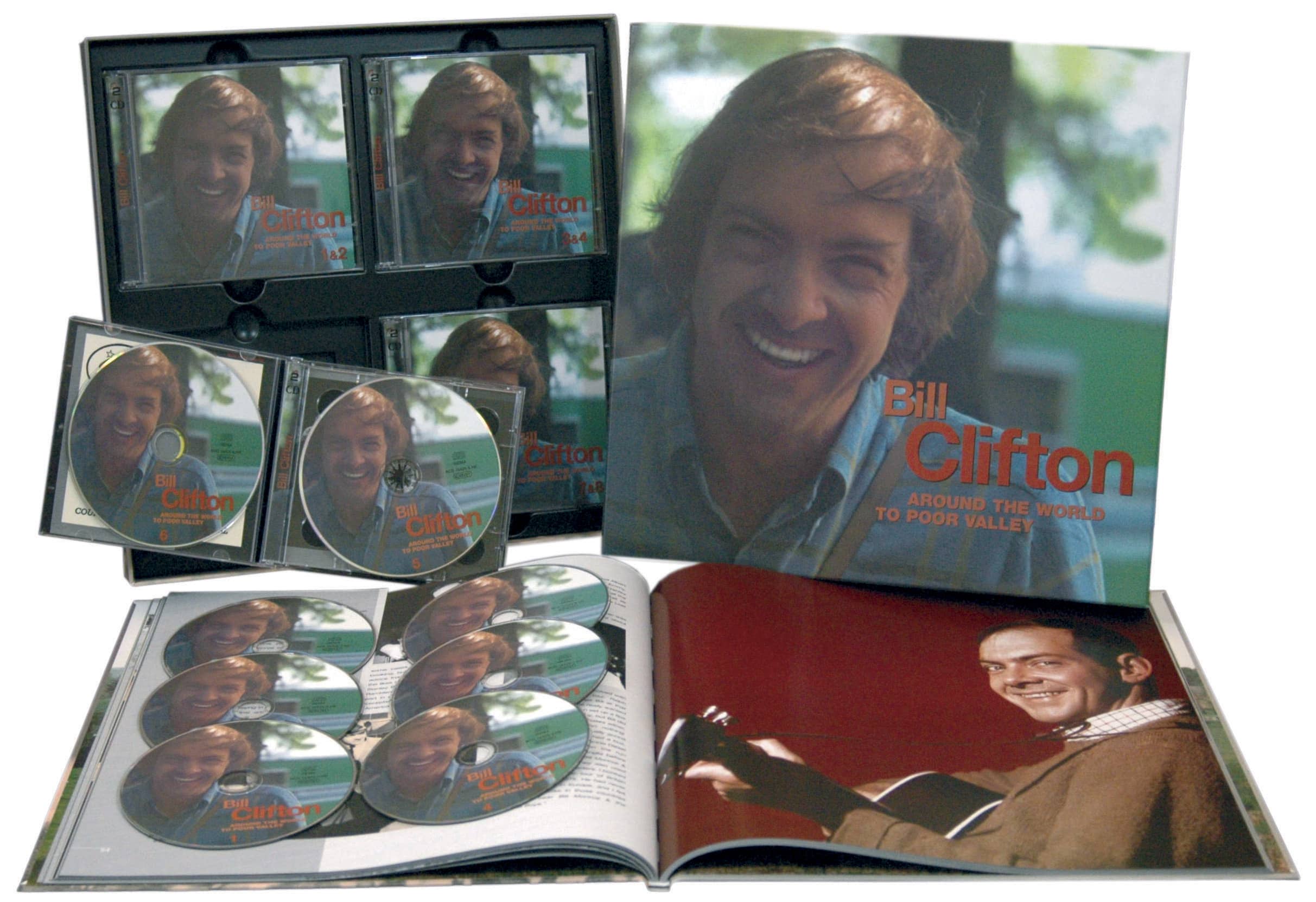 round The World To Poor Valley

In 1965, the first bluegrass record I stumbled upon - it was cheap - was 'Mountain Bluegrass Songs' by Bill Clifton & the Dixie Mountain Boys. At the end of 1966 the first live bluegrass I saw was Bill Clifton with the Echo Mountain Band, when they visited the Netherlands.

Looking back, knowing what I know now, it was not a coincidence that I turned to bluegrass and old time music listening to Bill Clifton. If I had missed him, and first had encountered Bill Monroe or the New Lost City Ramblers, I might not as easily have fallen for their music.

Bill Clifton is known to have said, "I have never heard a song by the Carter Family I did not like". I think I can safely say that I have never heard a song by Bill Clifton that I did not like. His extraordinarily good taste, the quality of his musicianship, his sincerity, and his unconditional love for the songs he sings, always shine through, no matter if he plays with a full bluegrass band, in a duet or trio, or just by himself.

Bill Clifton was born into a wealthy Maryland family who valued a good education and had the money to buy one for the bright young man who took a liking to hillbilly music. This inclination was something he developed by himself into a total devotion to the traditional music of the Carter Family and many other singers and musicians from the rural South. Bill was a musician first of all, but he knew that studying the music, preserving songs that otherwise might get lost, was very important. The music had always been a primarily oral tradition, but Bill realized that in just writing the words to the old songs down and publishing them in his famous 'Bill Clifton Song Book,' way before anybody else did something similar, he was doing what needed to be done.

When asked, Bill Clifton will not call himself a bluegrass musician. No high pitched vocals, no breakneck tempos, and a tendency to use the guitar for more than just rhythm to him seem reasons to think that Bill Monroe would not call his music bluegrass. On the other hand, Bill Clifton brought his clear, well intonated, and friendly voice, his balladlike singing and his lead guitar parts into the music, leading it into directions that might not have been as easily taken on the basis of the music of Monroe, Flatt & Scruggs, Reno & Smiley, or the Stanleys.

Bill Clifton in the 1950s and early 60s was the most important link between the traditional southern music he loved and respected so much and the new musicians who were to change the music so it would appeal to city, northern, and international audiences as well. His cooperation with the Country Gentlemen is the living proof of this development.

Bill Clifton organized the first ever bluegrass festival in Luray, Virginia, in 1961; he was founding member of the Newport Folk Festival the year after that; and maybe most important, was the first one to take this music outside of the United States. His influence on musicians and fans around the world cannot be overestimated. He lived in western Europe and in Asia, traveled eastern Europe, Australia, and Africa, doing more for the spreading of bluegrass and traditional country music around the world than anybody else.

I have asked Richard K. Spottswood, renowned music historian, for his view on Bill Clifton's significance in the history of American country and bluegrass music:

"The main thing that comes to my mind when I think of Bill as a performer, is that he was really the first person who was not of a rural Appalachian background to sort of pick bluegrass as opposed to something else that he could have chosen. He was from a wealthy family of German extraction, in Baltimore County, Maryland. He was able to take up what essentially was a new mountain folk music at the time - the early '50s - and to perform it in a way that was convincing, that the people that liked old time music accepted very readily. Unlike someone like Mike Seeger, who sometimes I think affects a very unfortunate mountain accent of his own devising, Bill just sang the same way he speaks. He served for many people as sort of an entree in the music. Once you have absorbed Bill Clifton you are ready for Bill Monroe. Bill was really the first who took the music that would be called bluegrass - it wasn't then - to universalize it in a way that made it possible for all of my contemporaries, people like John Duffey, Bill Emerson, and Pete Kuykendall, all of these people from the Baltimore-Washington suburbs, who were southern but not country, to take up the music and perform it convincingly. I don't know that it would have happened the way it did if Bill had not done it first, if Bill hadn't decided to organize a little band, to put it on the University of Virginia radio station to find himself a southern drink - I'm talking about Dr. Pepper - to sponsor. And not only do it, but do it convincingly, with good musicians. Johnny Clark for instance was as wonderful a banjo player as there was in those days."

If, when Bill stumbled upon him, Johnny Clark had been an old time banjo player, Bill's music maybe never would have been categorized as bluegrass, but as old time music instead. Bill has made his mark in bluegrass, but he was comfortable singing in the folk revival tradition as well, with someone like Hedy West. Bill worked for Starday Records and was able to sort of fight Don Pierce, who wanted to put a five string banjo on all of his Carter Family songs. Bill did not win them all on that one, but he sure tried.

Over the years, from Bill to John Duffey to Emmylou Harris, lots of people that weren't country singers or singers of rural origin, have been able to take that music and shape it and still keep the feeling of authenticity in it. Let me compare it to this, a lot of people have come along and tried to sing Mississippi Delta Blues, and they can't do it. If they are white it sounds like they are singing in black-face, or even if they are younger blacks, who haven't gone through the same hard times, the rural cotton plantations, that people did in the Charlie Patton and Robert Johnson years, they don't sound right. But Bill just had something of himself, he does not know what it is and I'm sure I don't, that made it possible to sing those old mountain songs very convincingly and to become a real presence in bluegrass music practically from the first time he did that.

Bill also, unlike a lot of people from that era, knew an awful lot of the early repertoire and was constantly bringing back earlier songs, and even some earlier styles and making them part of bluegrass. Bill employed someone like Mike Seeger very well, having Mike play the old time banjo or the autoharp, or having Pete Kuykendall come on the record and play a fingerstyle guitar. Putting in elements that had been important in American country music prior to bluegrass, and sort of keeping it there, on record. I think that was very important too, because for Bill the distinction between bluegrass and other kinds of traditional music does not really exist. Well, it exists but it is not a line in the sand that you can't cross.