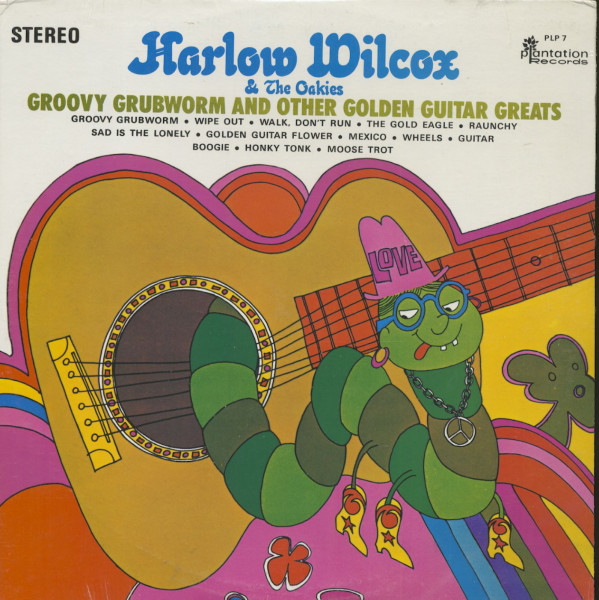 Harlow Wilcox in total recorded two LP albums for Shelby Singleton's 'Plantation' label. The first one was 'Groovy Grubworm And Other Golden Guitar Greats' from 1969 which Wilcox recorded together with his band The Oakies.

The album actually sounded like it has been recorded in the early 1960s. As a separate genre, the R&R Instrumental of the late 1950s/early 1960s had pretty much run its course in about 1965 following the advent of the British Invasion, as the hits for the likes of Johnny & The Hurricanes, The Ventures, The Champs, Link Wray & His Ray Men and Duane Eddy & The Rebels had either dried up or were in the process of doing so. So, in 1969, with Psychedelic Rock and further such experimentation taking over, seeing a throwback R&R Instrumental make the Billboard Pop Hot 100 was unusual.

Harlow Wilcox & The Oakies received a 'Grammy' nomination in the same year for the 'Groovy Grubworm' LP and Shelby Singleton let them record the second LP called 'Cripple Cricket And Other Country Critters' which came out in 1970 but the album got no attention and went nowhere and nothing more is known about Harlow Wilcox and the Oakies.