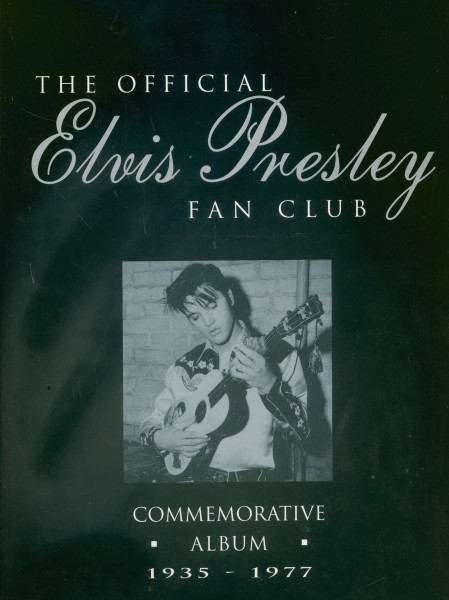 Published to coincide with the twentieth anniversary of Elvis's death, this stunning album has the exclusive en sement of the Official Elvis Presley FanClub, Using her privileged access to the Official Fan Club archive, which holds one of the best collections of Elvis photographs in the world, Julie Mundy has compiled the definitive pictorial biography of the greatest recording artist the world has ever known.
Julie's authoritative, illuminating text accompanies over 300 rare photographs showing Elvis in the recording studio, on film sets, with his family and at large with his fans. Beautifully designed and complete with the Fan Club stamp of authenticity, this is the essential Elvis portrait for fans the world over.


Introduction  All Shook Up

Elvis made his first appearance in the UK chart in May 1956. His first gold record Heartbreak Hotel started it all. It paved the way for popular music today and started a fan phenomena, unrivalled by any other artist. The Official Elvis Presley Fan Club of Great Britain was established in August 1957 when Elvis was enjoying chart success with his first UK No.1 single All Shook Lip. Originally founded in London's Mayfair by Jeanne Saword and Dug Surtees the club cost the equivalent of 55p to join, for which members received five bi-monthly magazines, two journals and free glossy black and white photographs. The Official Elvis Presley Fan Club of Great Britain and the Commonwealth was first registered with the British Board of Trade in 1957 and was re-registered by Albert Hand Publications Limited in 1961.

Albert Hand had been publisher of the hugely successful Elvis Monthly since 1960 and when Dug and Jeanne went their own way in early 1962, Albert took over as Fan Club Secretary. The new publication was entitled Elvis Express and membership was the equivalent of a mere 27'/2p. The fan club was the first official fan club outside of the USA which enjoyed the blessing of Elvis and the Colonel and in 1967 the club was re-assigned to its new Secretary Todd Slaughter, again with official endorsement. Todd Slaughter excelled in his role as Fan Club Secretary for 28 years. In 1972 the club began organising trips to the United States so that fans could see, and a lucky few meet, their idol. Todd's outstanding work with the media earned the club recognition world-wide, building its fan-base to one of Elvis' largest. In November 1994 Todd underwent heart transplant surgery and although making an excellent recovery resigned as club secretary in December 1995.

Stepping into the role of Fan Club Secretary was not easy. I didn't really know who Elvis was until his untimely death in August 1977, when I was only eight. In the years that followed, Elvis films were prime time television viewing, captivating a whole new generation of fans, including myself. This still continues today as people turn away from contemporary music in the nineties and go back to the origins of popular music. Backed with our original members and future generations of fans, the Official Elvis Presley Fan Club continues to live up to its reputation as the most respected fan organisation in the world.