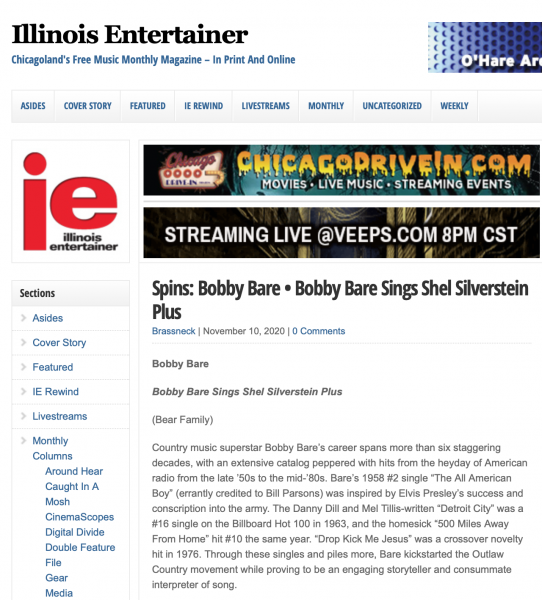 Country music superstar Bobby Bare’s career spans more than six staggering decades, with an extensive catalog peppered with hits from the heyday of American radio from the late ’50s to the mid-’80s. Bare’s 1958 #2 single “The All American Boy” (errantly credited to Bill Parsons) was inspired by Elvis Presley’s success and conscription into the army. The Danny Dill and Mel Tillis-written “Detroit City” was a #16 single on the Billboard Hot 100 in 1963, and the homesick “500 Miles Away From Home” hit #10 the same year. “Drop Kick Me Jesus” was a crossover novelty hit in 1976. Through these singles and piles more, Bare kickstarted the Outlaw Country movement while proving to be an engaging storyteller and consummate interpreter of song.

1974 country chart-topper “Marie Leveau” marked a special connection, though. The song from 1973’s Lullabys, Legends and Lies was the comical story of a loathsome Louisiana witch who was not to be crossed by any man, and it was written by Bare’s close friend by Shel Silverstein. Although Bare’s partnership with the beloved renaissance man (songwriter, poet, playwright, performer, children’s author and Playboy cartoonist is a pretty broad spectrum) ended with Silverstein’s death in 1999, the pair’s magic was rekindled this year with the standalone release of lost 1978 album Great American Saturday Night–an album composed entirely of Silverstein songs.

Bobby Bare Sings Shel Silverstein Plus extends the celebration with a grand banquet of the pair’s memorable history together. The box set includes eight discs with more than a hundred Silverstein songs (out of 137 total), including 25 previously unreleased tracks. Six expanded albums are included, with Lullabys, Legends and Lies and Great American Saturday Night among them.

In addition to “Marie Laveau,” Lullabys features “Daddy What If,” featuring a sweet duet with Bare’s young son Bobby Jr. (now guitarist with Ohio indie rockers Guided By Voices). 1975’s Hard Time Hungrys was a concept album written during America’s deep economic recession, with folk-blues songs like “The Unemployement Line” chronicling even more troubled times from the early 20thcentury. The album is expanded with six more Silverstein songs including the down-and-out “Things to Sell” and the wistful sadness of “It’s Good to Know the Sun’s Still Shinin’ Somewhere.”

The title track to Singin’ in the Kitchen gets the whole family into the act, “banging on the pots and pans.” Tumbling story-song “The Giving Tree” shares the title and theme of Silverstein’s famous fable of sacrificial love and best-selling book. The expanded album includes Bare’s version of the lovesick and autobiographical “Sylvia’s Mother.” Bare’s (and Silverstein’s) pleas are regularly interrupted by a telephone operator interrupting to request “40 cents more for the next three minutes.” The song was an earlier #5 hit for Dr. Hook and the Medicine Show.

Stray Bare Tracks includes the ode to dubious but irresistible southern cuisine “Greasy Grit Gravy,” a song boasting vocals by Bare, Willie Nelson, Waylon Jennings, Silverstein and Dennis Locorriere and Ray Sawyer of Dr. Hook. “There’s an 18-Wheeler in Front of the Ritz Hotel” tells the bittersweet tale of an annual love affair. 1980’s Down and Dirtyfeatures #11 country single “Numbers.” Bare sizes up a prospect at the watering hole, and she returns the favor. “Since there ain’t no zeroes, I give you a one,” she says in withering summary.

Great American Saturday Night features wry should’ve-been classics like the frustrated exhibitionism of “They Won’t Let Us Show it at the Beach.” You can keep your weapons on display, “but if it’s made for lovin’, you gotta keep it hid.” The title track marks the time “when all of your Monday to Friday dreams will come true.” The album is augmented with three additional tracks. The Johnny Cash-styled two-step “Dirty Ol’ Me” is the tale of an unrepentant double-crosser who gets away with his wicked deeds. “Livin’ Legend” is the plea of a washed-up country crooner. “When the crowd is gone, mister, I’ll be glad to sweep your floor,” offers the singer, hustling for one more gig.

A gorgeous, 128-page hardback book includes a new interview with Bare, a profile on Silverstein, photos, and lyrics and liner notes for every song. This lovingly crafted set is ideal if you’re seeking a deeper dive into Bare’s storied career or whether you only know Silverstein from his printed stories. (bobbybare.com)