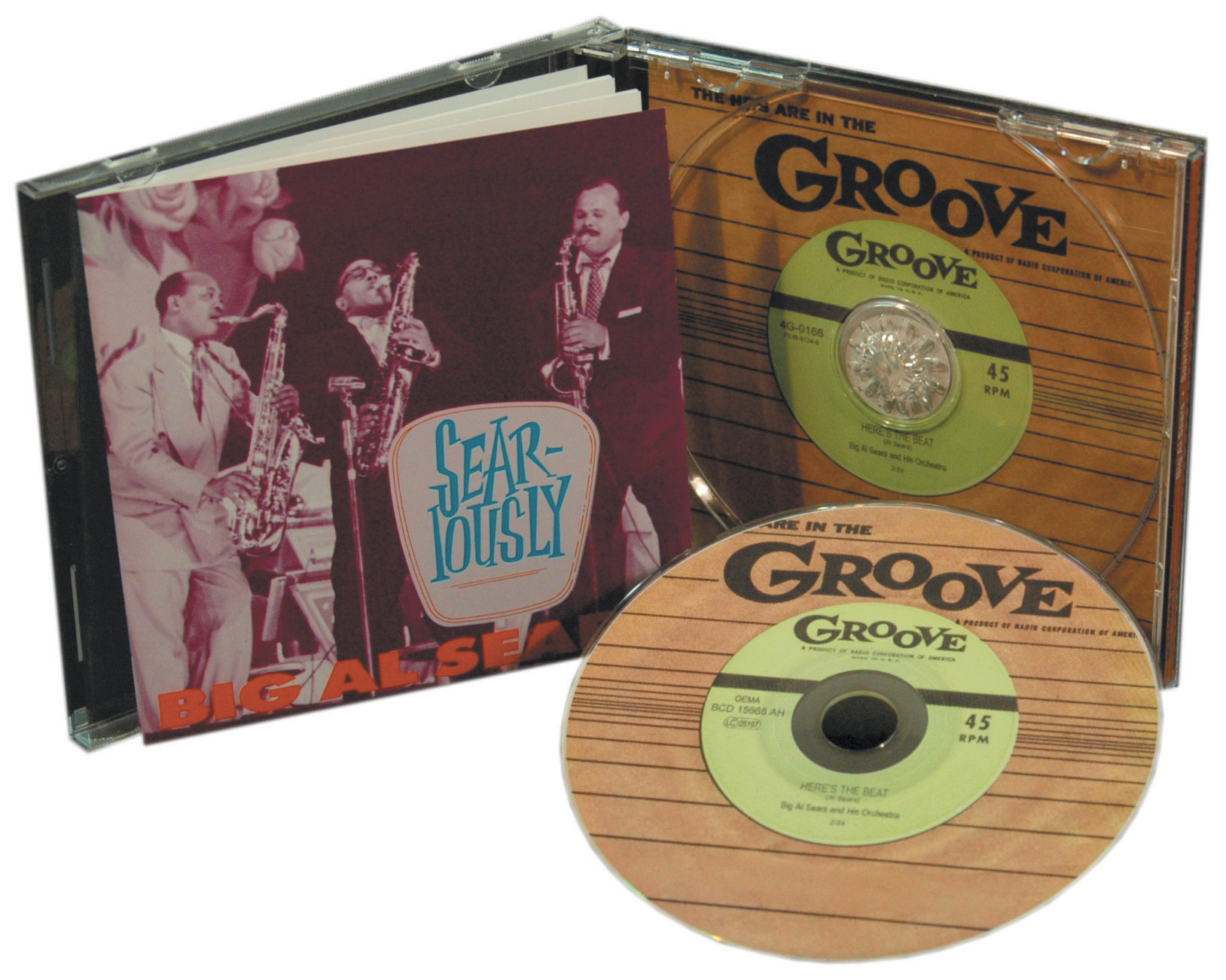 Albert Omega Big Al Sears, a great musician and a brilliant man already displayed tremendous intelligence and musicality as a very little Al. At least one piece of evidence attest-ing to the child's acumen has lasted to this day: in the mislisting - by just one day - of his birthday. Playing fast and loose with that date was a shrewd move on little Al's part since in his neck of the woods, Macomb, Illinois, school children had the quaint custom of beating kids up on their birthdays. After having been soundly celebrated by his chums on his seventh birthday, February 21, 1917, Big Al noticed that because of Washington's birthday, there was no school on the following day. So he announced to his family that from now on his birthday was going to coincide with honest George's. And little Al's little lie now lies in the Encyclopedia of Jazz.

As for Big Al's early musical talents, they too were in evidence in those days. His older brother, Marion, recog-nized Albert's ear: Al had perfect pitch. Marion personally supervised his brother's training on reed instru-ments, primarily alto and baritone saxophones. By the time Al was in high school, Marion even helped persuade their parents that it would be a good idea for Al to make a musical excursion to Har-lem. It was then he got his first big time gig when he subbed in a unit whose pianist was Fats Waller and whose vocalist was Alberta Hunter. As it hap-pened, Hunter had been running a scam on her bandmates, stealing from their tips and concealing her ill-gotten gains. The band elected the sub - a 13 or 14 year old Al Sears - to confront her. Jolly Alberta had a good time teas-ing innocent Albert. She not only told Al to come and get it, but she also let him know the private place where she'd been hiding it - not a place you'd send an adolescent grope. Al didn't take the money.

The brief visit to New York also in-cluded less off-color encounters with prominent musicians such as Sidney Bechet, whom Al met at what he remembered to be Bechet's own club, the legendary Club Basha. Sears' eventual return to the State of New York marked the true start of his professional career. The young man shuffled off to Buffalo, the state's second largest city, and received some seasoning.

By late 1927, Al got back to New York City. His big gig there came when he replaced Johnny Hodges at the Savoy Ballroom in Chick Webb's band. Hodges had moved on to the Cotton Club, joining Duke Ellington.
Next Al Sears went to work for one of the more notorious figures of the Jazz Age, Arnold Rothstein. Rothstein, who actually appears under his real name in F. Scott Fitzgerald's The Great Gatsby, is worst known for fixing the 1919 World series. In 1928, Rothstein financed a road company of the Black Broadway musical, Keep Shufflin' . When their tour reached Chicago, Arnold Rothstein was has-tened to his maker by fellow gangsters. Funding for the Keep Shufflin' road show ceased.

Al Sears fared better than his col-leagues who were suddenly stranded. He was relatively near home, so he headed there.
Soon Al was playing in the leading Jazz orchestra of the Cincinnati area: Zach Whyte's. Sears made his first records with Whyte in January, 1929. He was all of 19 when he left Whyte's group, going back to Buffalo, then coming down to New York City where he again found a prestigious chair at a legendary Harlem haunt. This time it was at Small's Paradise, one of the few clubs still extant in 1992. There he joined Elmer Snowden's Orchestra. His associates in the orchestra in-cluded Dicky Wells, Otto (pronounced Oh-toe) Hardwicke, Big Sid Catlett and Roy Eldridge.

The legendary John Hammond, at 21 just ten months Sears' junior, was one of the Snowden band's biggest fans. He spotted the talented saxophonist, and for the next few years would champion Big Al's career. To his dying day John Hammond bemoaned the fact that no recordings were made by that band; but the orchestra did make an obscure 1932 flick entitled Smash Yo' Baggage. Unfortunately the up-and-coming reed player contracted pneumonia during the winter of 1932-33, and had to go home to recover. Once back on his feet, however, Big Al Sears launched his own career as a leader. It was back to Buffalo again, and then a stint in the Ohio-Kentucky area. By 1936 the Al Sears Orchestra had the most prestigious jazz job in Cincinnati at the River City's version of the Cot-ton Club. John Hammond renewed his acquaintance with Big Al there in early '37. Hammond was pleased and surprised to find that Al had taken up the tenor saxophone. He also had praise for Sears 'vocalist, Helen Humes. From then he became, in ef-fect, manager for each of these artists. John Hammond brought Big Al Sears and Helen Humes to the Big Apple in late 1937. The entrepreneur was grooming Humes as the eventual re-placement for Billie Holiday in Count Basie's Orchestra; but finding the ap-propriate niche for Big Al was not as obvious. He did obtain record dates for them both with Harry James. 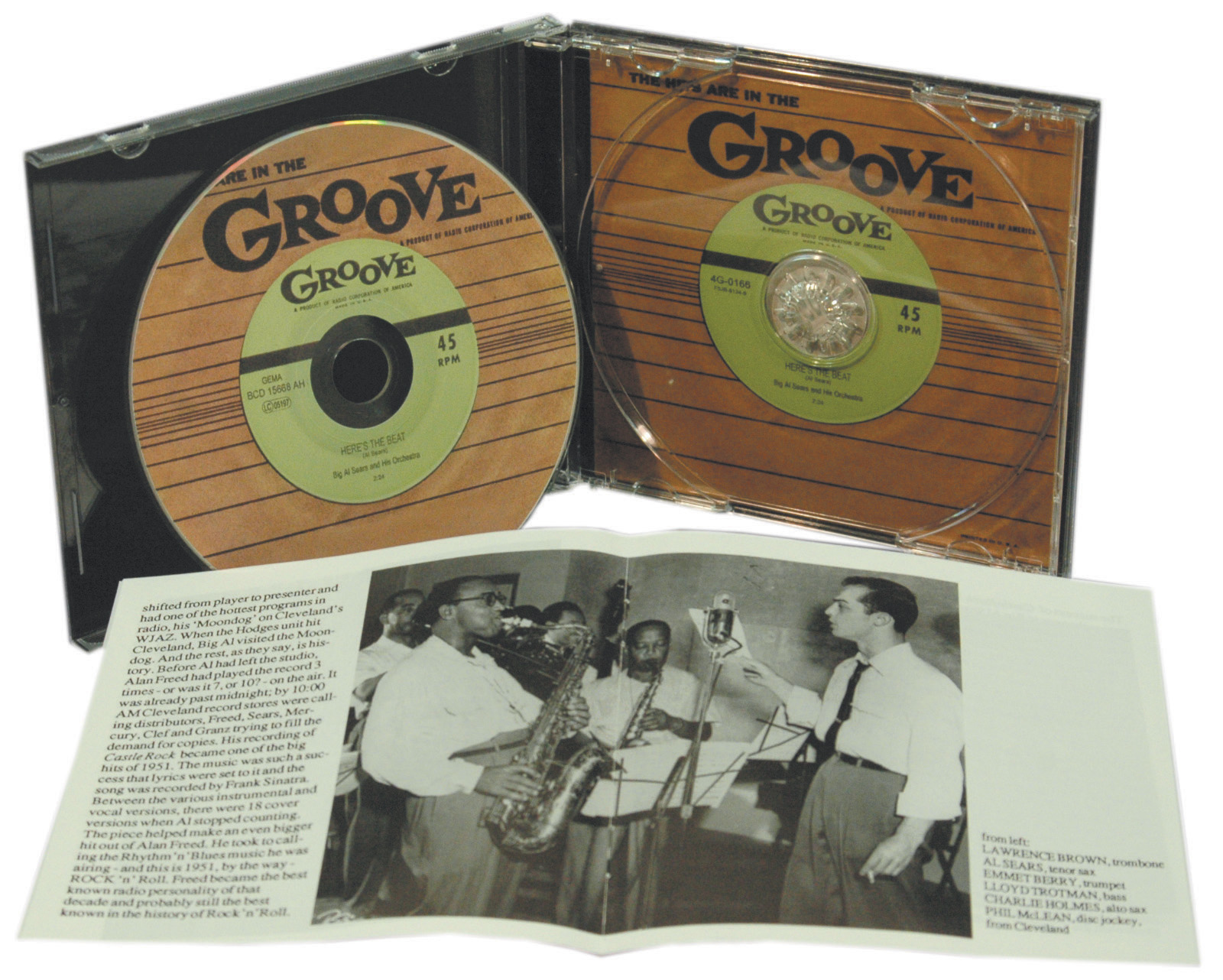 Helen Humes appeared on James' very first session as a leader, (a studio ensemble loaded with Basie-ites,) while Big Al Sears made James 'first Big Band date, and Big Al's tenor can be spotted as often as James' trumpet. But there was also another artist fea-tured that day in what are his first recordings: Frank Sinatra. One record date, however, doesn't put much food on the table. While Ham-mond was trying to get Al his big break, Sears landed a job uptown in the long successful dance band of Ver non Andrade. They played at Harlem's renowned Renaissance Ballroom, a job that ended each eve-ning at midnight, far earlier than most Jazz gigs. Big Al Sears used to leave the Renaissance and move on to Minton's to jam. Big Al was playing mostly alto sax in Vernon Andrade's band; at Minton 'she played only tenor building up his chops on what both he and John Hammond perceived as the best instrument for him. From 1941 until his death, Big Al Sears played tenor saxophone exclusively. Al Sears' first full time work as a tenor man came with Andy Kirk & His Clouds Of Joy. Kirk, (at this writing the senior statesmen of Big Band jazz: age 93) hired Big Al to fill the ailing Dick Wilson's chair. When Wilson died, Big Al stayed on. In 1942, Vernon Andrade retired and Al Sears was brought back to take over the band. While back at the Renais-sance, Al got a call from John Ham-mond, who had found that elusive big gig. Hammond, also had been asked to select an African American to head a hand-picked ensemble for USO Shows during World War II. Big Al Sears filled this role, serving his country, the cause of integration, and Jazz music.

Big Al Sears created a sensation on his first tour with his 'Concerto For Three
Tenors' featuring himself, Budd Johnson, and Lester Young. A later tour featured the composer of a new hit song: Ram Ramirez playing his own Loverman. Big Al Sears continued leading USO tours until early 1944. He had received a great deal of favorable press, and Duke Ellington, for one, had been fol-lowing the story. One day the phone rang. It was Ellington. The maestro was offering Ben Webster's chair to Sears. Big Al had the feeling he wasn't quite big enough to fill that vacancy. He told Duke that he was honored but somebody like Don Byas would be a better choice. Ellington persevered. Duke Ellington had made a conscious decision to replace a key man leaving his band with somebody quite dif-ferent from him. Although both Ben Webster and Big Al Sears could be linked in timbre to the Coleman Haw-kins school of tenor sax, there were few other similiarities. Webster em-phasized the rhapsodic balladeering end of the Hawkins school while Big Al Sears was a funky Blues-based player offering an element to the Haw-kins school that many found absent in its founder. Duke Ellington himself had been criticized at times for being too slick, too much the grand com-poser disconnected from the roots of his own traditions. Such criticism of the Maestro - often voiced by John Hammond - peaked during the 1943-44 period when Ellington's sym-phony, Black, Brown, And Beige was challenged by much of the Jazz and general music press. What better time for Duke to go the other direction? In hiring Big Al Sears Ellington acquired a thorough musician who not only had perfect pitch and the ability to perform either by ear or from paper, but also a musician with an impeccable feel for the Blues.

Big Al's skills not only added something to the bandstand, they also helped out off-stage. During this period Duke was writing must of his music between gigs while the band was traveling on trains, and the Maestro could summon Al Sears to the ducal car to get his bearings on the keys and pitches.
But Al's advice was sought on other matters as well. By 1939 Ellington had taken complete control of his own music enterprises. In the decade which followed he established a pattern of occasional brainstorming with certain band members. Duke preferred con-sulting with recent additions to his band's roster rather than his veterans, probably in order to get the views of those who had experience outside his organization. Ellington wanted, among other things, to make sure the band was being run properly from a business perspective. It happened that Big Al had taken advantage of a dry spell during the Depression to take some business courses, so he was a natural choice for these discussions. As for Big Al, he considered his five years with Duke Ellington the pin-nacle of his career.
Al Sears left the Ellington Orchestra at the end of the 1940s. Having mar-ried his wife, Ruth, on October 31, 1940, Big Al now had a daughter, Syl-via, and a son, Albert Jr. on the way. He wanted to come off the road. Two years later, when Johnny Hodges,...