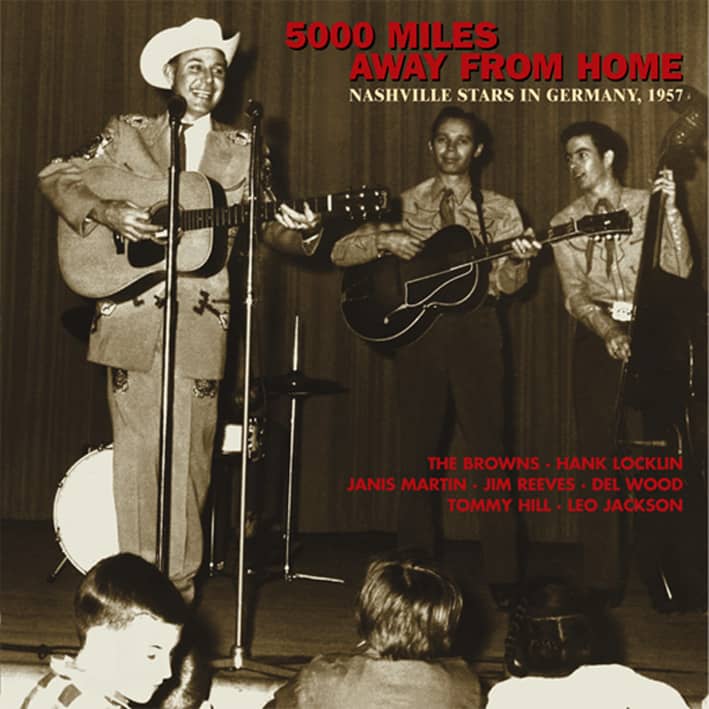 According to Tommy Hill, trouble set in long before landfall in Europe. "About an hour out of Iceland, I was the only one awake, and I felt something like an air pocket. I looked outside and an engine was on fire. They had something on the engine to smother the blaze, and they shut the engine down, and landed in Iceland. There were five or six couches. I grabbed a sandwich and laid down to sleep. They all said, 'We'll leave you behind, Tommy.' I said, 'I don't think so.' We were there about three hours."

The troupe arrived in Frankfurt on April 2, and performed the first show the following day. Tommy Hill had decided to perform Fraulein, a fast-breaking song back home. "I said, 'this is gonna be a big one back in the USA,' and I got to the end of the song...and no one applauded. No one! Someone told me I was playing in an officers' club and 'Frauleins' were a touchy subject among the officers' wives." The Browns sang what would turn out to be the flip-side of their new record, It Takes A Long, Long Train With A Red Caboose. Hank Locklin, who had turned down Four Walls, sang his new record, A Good Woman's Love, and Del Wood did one of her most-requested numbers, 12th Street Rag. Reeves sang T. Texas Tyler's 1954 hit Courtin' In The Rain, a song he is not otherwise known to have recorded, and the old Lulubelle & Scotty favorite, Have I Told You Lately That I Love You, which he'd included on his recently-released first album. Janis Martin remembered a much longer show than the one captured here. 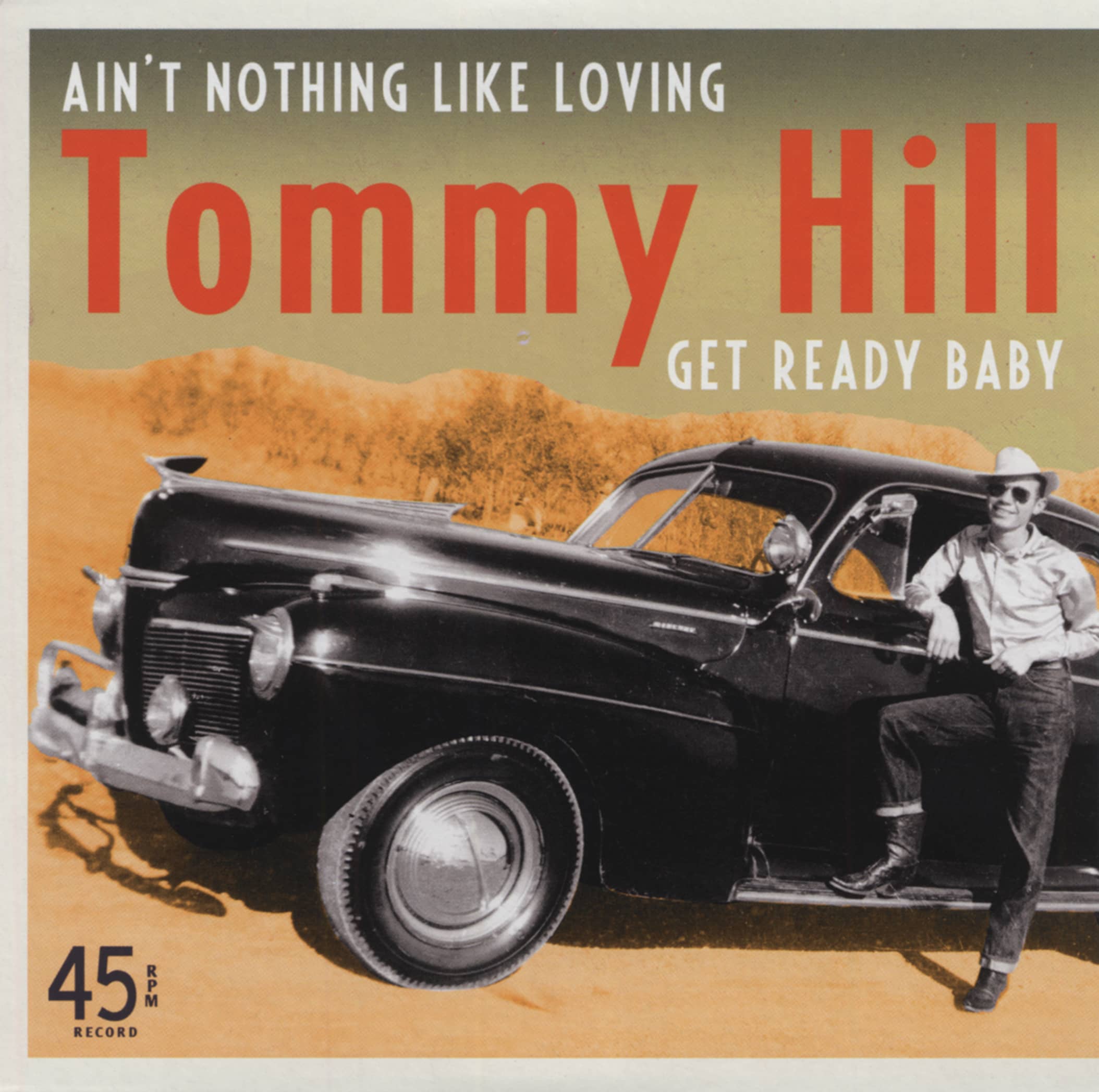 There were three days in Frankfurt to get over jetlag, enough for the unmarried members of the troupe, or those who'd left their wives behind, to check out the nightlife. "We found a pub in Frankfurt," remembered Tommy Hill. "We had a few beers and got up on stage. Had a ball. Had a big time." Janis Martin loved Munich. "I thought it was the most beautiful city I'd ever seen,” she says, "but we didn't get off-base too much. They put us up in the barracks with washrooms down the end of the hall. It was the accommodation for visitors. We played hospitals, officers clubs, and then shows for the enlisted men." One week into the trip, Herb Shucher wrote to 'Billboard' from Nuremberg. "This is the greatest," he said. "Much beer and wine. The crowds are great. The reception wonderful." Others had less charitable memories. "It was unorganized," said Maxine Brown. "We had to ride in transport planes, wearing parachutes between our legs. There were problems with promotion. Herb was out of his depth, I think." Mary Reeves was slightly more forgiving. "It was a grand tour. Lots of laughs. A good time. Very hard work. Very cold. And, as usual with that many people, a few spats--but less than you'd think." Hank Locklin, who'd spent most of his career in the inexorable flatness of the Gulf Coast and Texas was bemused by farms clinging to hillsides. "I guess there wasn't enough land to go around for everybody, so they had to hang it up and farm it on both sides," he said.

Although the itinerary doesn't show it, there's consensus among those who went that the tour went to England. "We flew over on a C-40," said Tommy Hill. "It was a parachute drop plane. They just had benches down each side and strapped the luggage in the middle. We got over London and just circled and circled waiting for the weather to break. Then they said, 'We're gonna have to find another airfield.' All of a sudden we just went nose down. Maxine and Bonnie Brown were hysterical. I never heard Jim cuss so much. The plane ran out of fuel just as we were taxiing to the terminal.”

The major problem centered around Janis Martin. She'd married in 1955 without telling anyone. RCA certainly thought she was single. Her husband was stationed with the 82nd Airborne Division's Special Services detachment in Frankfurt. They met up, and, according to Jim Ed Brown, she disappeared at some point en route, although Janis disagrees. She became pregnant on the trip, though. "RCA was promoting me as a teenaged star," she says, "and dropped me as soon as they found out." Herb Shucher's wife, Katherine, found out that she was pregnant while the troupe was in Nuremberg, and remained there while the show moved on.

It's unclear exactly where or when the tour ended. The last known date is at the Rhine/Main base on April 22, but Tommy Hill remembers that he and Maxine Brown shared the same birthday, April 27, and that they were still overseas then. "We were staying in a hotel," said Tommy Hill. "Stuffy old hotel. Guys watching the front, making sure you didn't sneak anyone in. But Dick O'Shaughnessy got five or six girls in through the coal chute. We had a ball. Dick really put on a birthday party for me."

Jim Reeves couldn't wait to get back to the United States. All indications from home were that Four Walls was breaking big. "He got the news that 'Four Walls' was selling better than anything he'd cut so far," says steel guitarist Bobby Garrett. "That's the happiest I ever saw Jim. It thrilled him to death to know he finally had a big ballad hit." There are no reports indicating exactly when the troupe arrived back. Shucher and Reeves started working Four Walls right away, though. There were television shows to arrange, and a lost month to make up. Tommy Hill left Jim's employment again and tried for a career as a solo artist (see Bear Family's 'Get Ready Baby' BCD 15709 for the whole story). The Browns would soon record I Heard The Bluebirds Sing, setting the stage for their epochal smash The Three Bells. Janis Martin, as noted, was dropped by RCA, although she returned to Europe many times, most recently in Spring 2001. Hank Locklin, who had barely dented the country charts since being signed by RCA in 1955, recorded Geisha Girl immediately after returning to the States, setting the stage for his own hit streak...and many more European tours. Del Wood returned to Nashville to become the grand old lady of 'The Grand Ole Opry.'She never scored another hit, but didn't need one.