On The Trail Of The Lonesome Pine 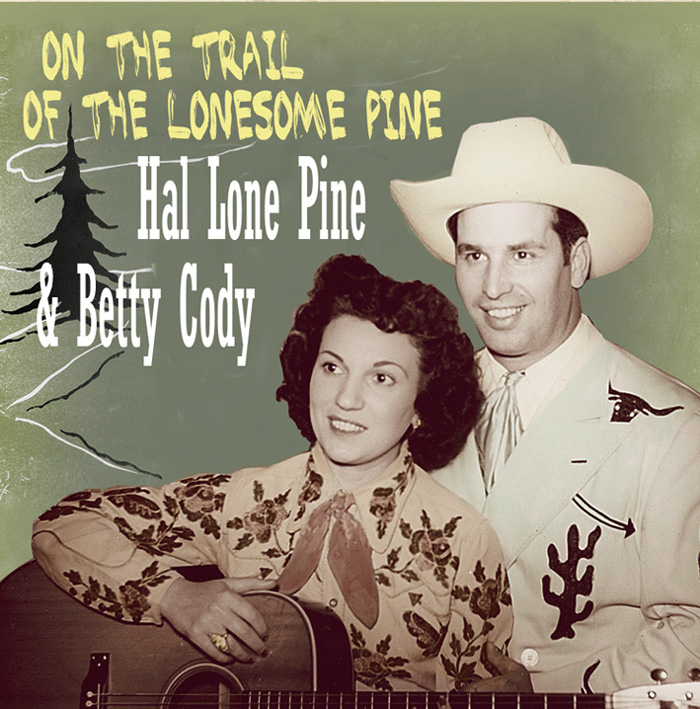 When Hal 'Lone Pine' and Betty Cody are remembered at all these days, it is often as the parents of guitar virtuoso, Lenny Breau. Arguably, that is no small legacy. According to many fellow musicians and critics, Breau was quite simply the best ever. Only his self-destructive personal habits kept him from achieving the ultimate rewards his talent might have afforded. But there is more to the legacy of Lone Pine and Betty Cody. They had their own careers and left many fine vocal recordings, both solo and duet. Their story is not often told any more and their music has all but faded from public awareness. We hope this package will help remedy that.

Harold 'Lone Pine' Breau and Betty Cody were stars back when the country music business was still in its relative infancy. Both the industry and the music were quite different from what they have become today. One of the biggest differences - indeed, many would call it a loss - is the fate of regional music. Country music styles, like pop and R&B music, have today become homogenized to suit the lowest common denominators of taste. Critics often use the phrase "dumbed down" to describe the process.

But back in the late 1940s and early '50s when the recordings on this disc were made, there was plenty of regional music in America. Harold J. Breau was born in Pea Cove, Maine on the 5th of June 1916. He spent his youthful years around Old Town, just a hop, skip and a jump from the Penobscot Indian Reservation. In the 1930s, Breau was a member of the Lone Pine Mountaineers (Maine is known as the Pine Tree State), a group that slowly dissolved, leaving him the lone Lone Pine Mountaineer, so to speak. The RCA Publicity machine cooked up some romantic tales of Breau saving the Penobscott chief's daughter from a drowning accident back when he was a lad, and being named 'Lone Pine' by his Indian playmates. Breau's former wife and recording partner Betty Cody doesn't remember hearing about any Indian playmates, and believes the origins of his name are a lot more prosaic.

Betty Cody (real name Rita M. Cote) was born on the 17th of August 1921 in Sherbrooke, Quebec, Canada, although most biographies list her birthplace as Auburn, Maine. "We moved to Auburn when I was 9 months old but it didn't change things much in our home. My family was French. There was almost no English spoken in our home. I was the seventh child of 12."  Some time in late 1938, local guitarist Ray Couture brought Harold Breau to Betty's family home in Auburn to introduce them. They were looking for a gig at the local radio station and needed a female singer. Betty was 17 at the time. "I could barely speak any English back then. I couldn't have carried on a conversation with you, but I could sing in English." Breau was not deterred. It was singing he had in mind, not conversation. Betty became part of the stage show almost immediately. She recalls, "We were very good together. Our voices blended well, our personalities did too." Pretty soon, the compatibility went beyond the act. Breau and Cody were married in June, 1940.

Husband and wife team Hal Lone Pine and Betty Cody became stars of American regional music. They virtually owned the country charts in the State of Maine and the adjoining Maritime Canadian provinces. They were regular performers on radio stations like WCOU in Lewiston, Maine and their 'Noisiest Gang in the Radio' show regularly crossed the border into Canada with performances on stations like CKCW in Moncton, New Brunswick, CJRW in Summerside, Prince Edward Island, CKCL in Truro, Nova Scotia. As their fame spread, so did their appearances across Nova Scotia, New Brunswick and Newfoundland with radio stations like CJLS, CKBW, VOCM, CFBC, CFNB. Such popularity did not escape the attention of Canada's national radio network, the CBC. In the summer of 1950 Hal Lone Pine and Betty Cody were offered the prestigious job of replacing a national icon, fiddler Don Messer, for 13 weeks over the CBC network. For the first time, Pine and Betty were exposed to a national audience, albeit a Canadian one.

Not surprisingly, all this exposure drew interest from the recording industry. By the end of the summer, Hal Lone Pine and Betty Cody found themselves at the RCA Victor recording studios in Montréal, Québec. They brought with them two members of their regular performing troupe: Raymond Couture – originally from Lewiston, Maine - and Lucien 'Smokey Martin' Leger. Couture and Leger were both important parts of the Lone Pine stage show. They were accomplished musicians, but they were also outgoing entertainers who did their share of comedy routines Couture regularly appeared in the guise of 'Little Abner.' "Harold started calling me that name. He was a large man, around 6 feet tall and I was barely 5'3. The name 'Little Abner' just stuck after that." Perhaps most importantly, Couture and Leger were also songwriters. Both were also perfectly willing to sign over or occasionally sell their material to Pine, who realized the value of original material but showed no talent for writing it. To be fair, this was not an unusual arrangement in its day. As Leger recently recalled, "I don't recall selling anything, but Hal took 50% of the songwriter credit whenever he recorded one of my songs." Ray Couture confirms the story. "I wrote a lot of the songs Harold and Betty recorded back then. Whenever my songs appeared on a record, Harold had become co-composer. Truthfully, I wasn't very involved with those things back then. It didn't matter very much to me. I just wrote them and gave them away or sold them cheaply."

There was also no sense rocking the boat. To Leger and Couture, Pine was their meal ticket although, in a much more subtle way, they were his.Men like Couture and Leger could typically use a few extra bucks and were happy to sell or assign part of the compositions that came so easily to them. Many such songwriters believed that they held within them an inexhaustible supply of material and the sale of an occasional title meant little. They could write two more tomorrow if need be. Three of the four songs recorded for RCA Victor by Lone Pine in September, 1950 were written either by Raymond Couture or Smokey Martin. Couture occasionally sold his compositions outright so only the name Harold J. Breau appeared on them. Pine had actually gone as far as recording a demo of Couture's song, Prince Edward Island Is Heaven To Me. (The song was heartfelt. Pine, Betty and their group had toured on Prince Edward Island and actually lived there for nearly a year.) Couture recalls, "I wrote that song in one night and I sold it to him the same night. I didn't think anything of it at the time. I figured it was just another song." As far as Pine was concerned, this was strictly a business arrangement. He saw potential in the song, bought it on the spot from Couture, and demoed it in the hope that fellow RCA Victor artist Hank Snow would record it. Betty Cody recalls that Pine was genuinely surprised when Hugh Joseph, their Montréal producer, told Pine to go ahead and sing the song himself. Pine was not disappointed but neither was he fully prepared to become an RCA Victor recording artist. Somewhere during that first session it must have occurred to him as well as the rest of his aggregation that this was for real.