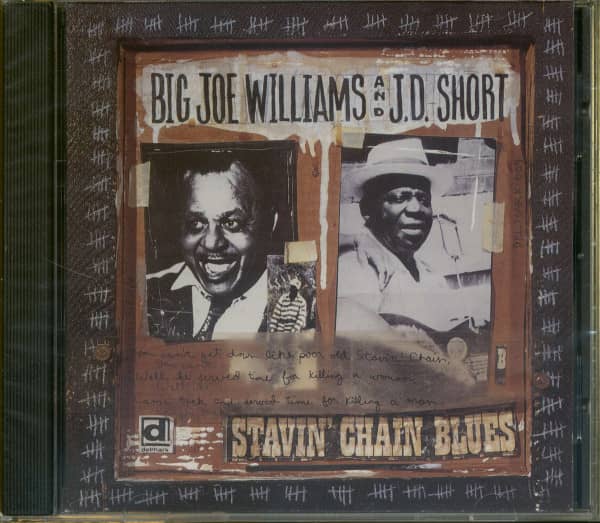 ...Joe dug into a patch and scuffed cardboard guitar case, rummaged through a spare shirt and old recording contracts and came out with a handbill with his photo on it to prove that he was "the" Joe Williams of Columbia Records fame. Once Joe sat down and played his bastard instrument the proprietor knew he was listening to the raw country blues of one of his favorite singers.

Joe insisted on a formal audition at his cousin's home on Cole Street the following Sunday afternoon... By the light of a bare 40-watt bulb, Koester heard for the first time the magnificent combination of two guitars and blues harmonica without surface noise. The other guitar was played by Joe's cousin J.D. Short.

BIG JOE WILLIAMS WASN'T A TYPICAL BLUES GUITARIST. When he decided not to 'hoe and chop cotton' after being offered a small plot of land and a mule by the father of a girl he was thought to have gotten pregnant. Joe 'hit the highway' with a medicine show jug band. He stayed on the move the rest of his life. roaming the south and the midwest. in an eternal round of visits to girl friends and relatives in St. Louis, Omaha. Chicago and all points south. He rode some rods and thumbed some rides. took a bus when he could afford it. By the '50s he had an encyclopedic knowledge of the highway system and of songs and guitar techniques gleaned from just about every good bluesman in the country. His first recordings on his own. promoted by pianist Walter Davis during a stay in St. Louis, were for Bluebird at RCA's Aurora location in 1935.

On one of his later visits to St. Louis in 1956, dropping by Joe's Music Shop, he heard about a white kid out at Delmar and DeBalivere who was interested in recording old blues artists being discovered by a cop named Charlie O'Brien. He brought along an old Columbia flyer to prove he was the real Joe Williams and not the young upstart who sang with Basie. His voice would have sufficed- -I already had most of his 78s- but Joe had left his guitar with his cousin, J.D. Short with whom he auditioned the following Sunday on Cole Street. Although Joe's records weren't R&B hits, he wasn't washed-up in that field. having a recent series on Trumpet Records of Jackson, MS. He had just signed with VeeJay in Chicago. Recording Joe had to wait until he did his VJ date and the option dropped. The first session for Delmark was impromptu (still unissued), recorded at Jackovac's Tavern. Erwin Helfer, on his way from college in New Orleans. played piano. In the fall of '57 Big Joe looked up Erwin in Chicago who booked a recording session for Cobra Records and a night at the College of Complexes where Bob Dylan befriended Joe.

I had bought a Crown tape recorder and had little money for recording studio time, so most of the ses-sions were held at my record shop but one took place in the University City home of Paul Breidenbach, a member of John Harford's bluegrass band. Harford later added a 't' to his name and wrote Gentle On My Mind. He can be heard here asking Big Joe about Jimmie Rodgers. J.D. Short came along for one of the shop sessions but my move to Chicago in August put off further recording or release of the Big Joe albums for sever-al years. I thought they'd sell poorly, but felt Big Joe had to be LP'd. Joe left St. Louis when we'd paid him for the extensive recording, missing a good gig at the bohemian Crys-tal Palace set up by beat poet Kenneth Rexroth. Piney Woods Blues (DELMARK 602) sold a surprising 700 copies! Favorable reviews appeared in High Fideli-ty. Playboy, DownBeat, as well as Melody Maker and Jazz Journal in England where interest in and knowledge of blues far surpassed the underground blues scene in the U.S. thanks to the trad jazz and skiffle music trend there In my Piney Woods liner notes. I predicted that Joe would 'walk into Seymour's Jazz Record Mart where Delmar(k)'s office is- and that's just what happened shortly after Piney Woods' release.

The Oxford Coffee House on North Avenue seemed a good place to celebrate Joe's return. The waitress overheard us calling his name, entered the conversation with 'You're Joe Williams-I have records by you.' We assumed she referred to Basie's guy but she had just read Sam Charters' Country Blues and got Joe a weekend gig singing there. I also promoted some Tuesday sessions up the street at the Blind Pig with Big Joe, Ransom Knowling and a different pianist each week: Little Brother, Memphis and Sunnyland Slim, Curtis Jones... Sitters-in included Paul Butterfield, Elvin Bishop, and Mike Bloomfield. By July we were recording him regularly. Our deal with Joe was to be exclusive but it made sense for him to appear on Folkways who paid some of Joe's bills and much of the studio rent. Ransom Knowling. THE blues bassist, couldn't get away from his job at the Audy Home until late so a lot of unaccompanied tracks were cut before his arrival. Thus came the Folkways album and three Delmark albums: Blues On Highway 49 (DELMARK 604), Nine-String Guitar Blues (DELMARK 627) and much of this album. Reportedly through N.Y. Times' Robert Sherman and Bob Dylan's intercession, Big Joe and Roosevelt Sykes were booked into Gerdes' Folk City, the center of the NYC folk scene. I made the trip. walked into Moe Asch's office at Folkways. 'He's been recording again!' The Spivey session with Dylan, two albums for Prestige's Bluesville line, and an indie production which Moe eventually issued ended business between Delmark and Joe.

But not the friendship. Joe soon had a wreck of a car and he saved rent by staying in the basement of Jazz Record Mart. He'd entertain visiting bluesniks with his stories and occasional impromptu concerts, get a commission whenever this resulted in the sale of one of his Delmarks. He offered the basement space to other blues and rock musicians, possibly including Iggy Pop and Charlie Musselwhite. I promoted some more blues nights at a coffee house, Fickle Pickle, in the Rush Street area where Joe had a gig when he was in town; and another Monday night series during the last weeks of the Gate of Horn. Big Joe was able to work more regularly in folk clubs, concerts including the 1963 American Folk Blues Festival. Earlier in '63, a bartender at the Gate of Horn, Bob Wettlauffer, was put in charge of Big John's on Wells Street, which had failed to make it with thumbtacked honky tonky piano. Bob hired Big Joe, probably his first (and maybe the last) steady full-week job. Bloomfield, Butterfield, Musselwhite, Elvin and co. would sit in to make up a small blues band. When Big Joe's itching heel took effect, Butterfield took over the job and, adding Howling Wolf's rhythm men when he went on the A.F.B.F. tour, recorded for Elektra. I was uncomfortable in the Jim Crow south of that time but in 1964 I had to get Sleepy John Estes and Hammie Nixon birth affidavits so we piled into Joe's car (I had none) and learned just how he travelled.

Not being able to read and write he wouldn't take the new interstates. We really got a taste of '30s highways. On our return, near Cairo, IL, Joe wanted to visit a friend in a black town but couldn't find the house. Suspicious locals formed a posse and we came, literally, under the gun. When Joe moaned, 'Oh Lord!' one of the citizens recognized him: 'You're that crazy nine-string guitar-player!' After an instant mood-change, we all repaired to the town tavern where Joe played and a very good time was had. By the early '70s, Susan and I were married and bought a building for the Koesters and Delmark on Lincoln Avenue. There was a spare room for Big Joe whenever he was in town. He fried chicken the grease was all over the kitchen but none on the chicken. But we saw less and less of Joe who eventually found a home near his birthplace in Mississippi, a trailer. The rounder had come home. — BOB KOESTER, June, 2003 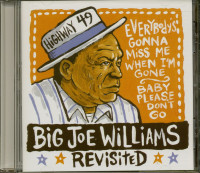 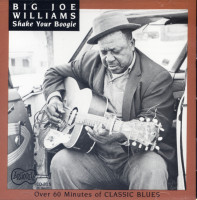 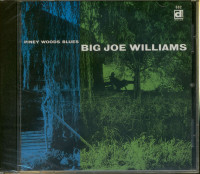