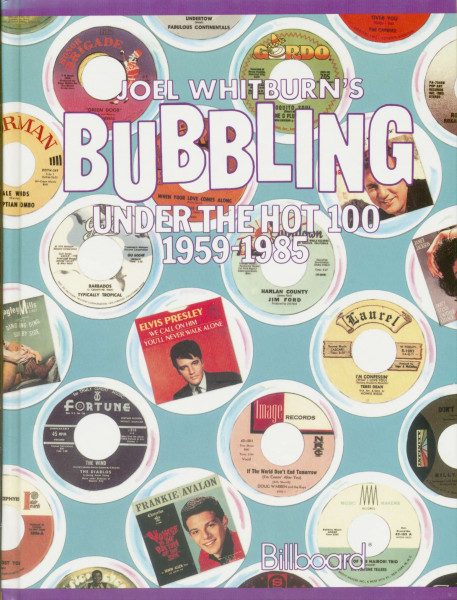 AUTHOR'S NOTE
For 27 years, Billboard's Bubbling Under the Hot 100 chart forecasted the future entries on the Hot 100. The titles on the Bubbling Under chart were the 45 rpm releases most likely to make the jump to pop's premier chart. Most of these records were building momentum in regional markets but had not yet gathered nationwide pop exposure.

Only here will you find:
♦ the first chartings of major artists such as Pink Floyd, David Bowie, Bob Seger (with The Last Heard), Billy Joel (with his Long Island group The Hassles) and The Beatles ("From Me To You" hit the Bubbling Under chart five months before The Beatles' Hot 100 debut)
♦ rare releases such as The Kinks on Cameo with "Long Tall Sally," "Baby Doll" by Carlo (Mastrangelo) of The Belmonts, the Vee-Jay EPs featuring "Peanuts" and "Since I Don't Have You" by The 4 Seasons, and The Jesters and The Diablos great versions of 'The Wind."
♦ the popular regional artists that charted several titles on the Bubbling Under chart but never hit the Hot 100 (a Milwaukee favorite, The Robbs, won the dubious honor of charting the most — six)

Record prices, photos and biographies further enhance the history of the Bubbling Under the Hot 100. An average retail dollar value appears for each record. Pictures of some of the hardest-to-find singles prove that they really exist. Short biographies are featured for artists that did not hit the Hot 100.

Other new additions include the symbols indicating which records crossed over to the R&B, Country and Adult Contemporary charts along with their respective peak position. Also revealed are the Bubbling Under records issued with a picture sleeve. From pastime to passion to profitable enterprise, the growth of Record Research has been the outgrowth of Joel Whitburn’s hobby. Joel began collecting records as a teenager in the 1950s. As his collection grew, he began to sort, categorize and file each record according to the highest position it reached on Billboard magazine's charts. He went on to publish this information — first on individual artists’ cards, then in book form in 1970 — and a business was born.

Today, Joel leads a team of researchers who delve into all of Billboard’s music charts to an unmatched degree of depth and detail. Widely recognized as the most authoritative historian on charted music, Joel has also collaborated with Warner/Rhino Records in creating a series of 150 CD albums, plus five CD albums with Curb Records. Joel’s own record collection remains unrivaled the world over and includes every charted Hot 100 and pop single (back to 1936), every charted pop album (back to 1945), collections of nearly every charted Country, R&B, Bubbling Under The Hot 100 and Adult Contemporaryrecords. Ever the consummate collector, Joel also owns one of the world’s largest picture sleeve collections, many of which he displays in the series of books (Top 40 Hits, Top 40 Albums, Top 40 Country Hits, Top 40 R&B Hits) he writes for Billboard’s book division. To date, Record Research has published nearly 200 books, over 50 of which are currently in the catalog.

Joel's site, www.recordresearch.com, brought his enormous database online in 2009. The MusicVault, complete with chart data and record photos, has proved to be an immediate, reliable wellspring of data