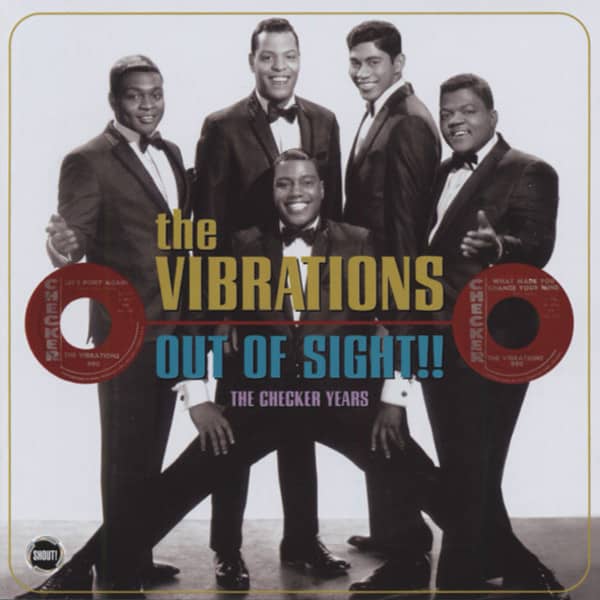 VIBRATIONS: Vibrations Out Of Sight - The Checker Years (2-CD)

Pour en savoir plus sur VIBRATIONS
The Vibrations The Watusi After half a decade of recording under a variety of names (they... plus
Fermer menu
"VIBRATIONS"

After half a decade of recording under a variety of names (they waxed the original Stranded In The Jungle in 1956 as The Jayhawks), the L.A.-based Vibrations broke through in '61 with a sizzler tailor-made for one of the flashiest dance outfits in the business.  If The Watusi sounded familiar to the listeners that pushed it to #13 R&B and #25 pop during the spring of '61, it was a musical clone of Hank Ballard and The Midnighters' Let's Go, Let's Go, Let's Go, an R&B chart-topper only a few months prior (it's on the previous edition of 'Street Corner Symphonies').

"That song was actually, it was a guy by the name of Ralph Bass. He worked with the Midnighters," says Vibrations lead singer Carlton Fisher. "That song is 'Thrill On The Hill,' actually. The first part of it, if you listen to it carefully, is the same song. Actually, it's got Johnson and Bass and somebody else on there, but it was actually written by everybody in the group. We all wrote it together, but at that time, stupid things were happening. We were young. So we just put a lot of stuff in one of the guys in the group's name. It was the worst mistake I ever made."

Checker producer Bass' involvement was obscured by registering his wife's name, Shirley Hall, as co-writer (she was a choreographer). First tenor James Johnson was the only Vibration to share in the writers' credits; Leslie Temple was their L.A. manager. Tenor Ricky Owens, baritone Dave Govan, and bass Don Bradley were shut out the way Fisher was. Cut October 31, 1960 in Chicago, The Watusi was cut with a band steeped in the blues that Chess specialized in: former Lionel Hampton saxman Johnny Board (whose solo is so close to Hank Moore's on Let's Go that it's practically undistinguishable), guitarist Matt Murphy from Memphis Slim's band, pianist Lafayette Leake, adventurous electric bassist Reggie Boyd, and drummer Phil Thomas. Its flip, Wallflower, rocked even harder.

As if they weren't busy enough churning out dance fare for Checker in the wake of The Watusi (Continental With Me Baby, The Junkernoo, Let's Pony Again), The Vibrations cut a demo in L.A. of a tongue-in-cheek (Baby) Hully Gully takeoff called Peanut Butter for producer H.B. Barnum, intended for The Olympics. Instead, it was sold to Arvee Records, which billed the group as The Marathons, and it became a Top 20 pop hit in the summer of '61. "Evidently the demo turned out good enough that he went on and put it out," says Fisher. "It surprised everybody." Especially Leonard Chess, who ended up putting Peanut Butter back out on Chess under the awkward billing 'The Vibrations, Named by Others as the Marathons.'

The Vibrations went on to wax the original My Girl Sloopy for Atlantic, their next hit in the spring of '64, then shifted their emphasis to ballads (notably their classic rendition of Misty), midway through the decade under the supervision of Chicago producer Carl Davis for OKeh. Kenny Gamble and Leon Huff worked with the group at OKeh during the late '60s (The Vibrations had moved their base of operations to Philly by then), then brought them onto their short-lived Neptune label. Owens left The Vibrations in 1971 to join The Temptations (bad move; he was soon back). Carlton left in '73, though at last look he was heading a new group of Vibrations. Owens died December 6, 1996.