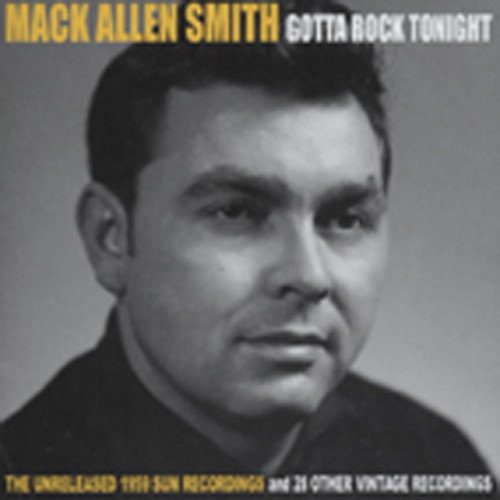 In the opening scene of Mack Allen Smith's 1993 novel Honky Tonle Addict 54-year old rockabilly veteran Mike Sanders wakes up in Room 136 of Clarksdale's Vacation Inn to find out that he's got company. There were many times, Sanders recalls, that he went to bed with a ten and woke up with a two, but on this particular night he landed a beautiful Ole Miss coed. Sanders' discovery prompts feelings of both pride and regret, and over the course of the novel he recounts the ups and downs of his career and goes into graphic detail about his exploits, sexual and otherwise.

"The library across the street from where I grew up banned the book," recalls Smith, "and my wife won't read it." Smith overcame his own problems with booze and pills but was never quite the "sorry asshole" that Mike Sanders recognizes in the motel mirror. After decades of playing Mississippi honky tonks and running his own Town and Country Club in Greenwood, though, Smith knew the character type well. "I was working then on the road a lot," says Smith of his inspiration to write the book.

"My cousin Durwood Herbert got killed in a car wreck in '63 after playing a gig and I got to thinking about it. I guess I had a damn insanity attack or something. I just visualized an old raunchy guy." Smith grew up in Carrollton, Mississippi in the hills just east of the Delta, and his inspi-ration to become a rockabilly singer was similar to many of his generation. "I first heard Elvis in '54 on Dewey Phillips' Red Hot and Blue program (on Memphis' WHBOJ -That's Al/right Mama and Blue Moon of Kentucky. That kind of changed everything. It just knocked me out, I hadn't heard anything like it. "He came to Grenada around then to some little community center. I didn't see him, but the next day the girls were runnin' around with their pictures of him. That kind of added to everything, he was really goin' around here. Before that I was a Hank Williams man, but he died when I was fourteen, New Years Day 1953."

"I started playing in '54 in high school in the FFA (Future Farmers of America) hillbilly band contest. They wouldn't let us do rockabilly, so I did Ray Price, Hank Williams stuff." Mack Allen Smith and the Flames soon found other venues where they could stretch out, and before long they were sharing stages with stars of the new genre. "In 1956 we played a show out here in the ballpark in Greenwood with Warren Smith, he had out Rock and Roll _Ruby, Sonny Burgess, he had out Red Headed Woman, and Charlie Feathers -"well, me dot,what me want" - he had Tongue Tied Jill. Warren Smith came in there in the park with a black and white Cadillac with a big bull bass on top of the car." After a two-year stint in the military Smith took his group up to Sun studio in Memphis, but the songs they cut at that 1959 session weren't issued. Just several years later, though, Smith was back in Memphis, where he recorded the first four songs found here at the legendary Hi recording studio. The songs on this collection were all cut at either Hi or Rick Hall's Fame recording stu-dio in Muscle Shoals, Alabama, and most appeared on singles on the now collectable Vee Eight, Mariteen, Statue and Cynthia labels. Many are straight blues, a style Smith first heard as a boy blaring out of the cafes on the other side of the tracks in North Carrollton.

Local legend Mississippi John Hurt used to play informally at Smith's uncle's repair shop, and while serving in the military Smith sat in with black bands at the Figure Eight Club in Los Angeles. The other tracks reflect the diversity of Smith's band, which remained popular in the area and continued to record regularly into the 1980's. "We mostly played at places that were a cut above the beer joints, pretty big halls that held 500 to a 1000," says Smith. "You had to have a pretty good band to play those places." Part of the band's popularity stemmed from their ability to play in different styles, rang-ing from Stax soul to outlaw country to the pop of groups like the Box Tops. Today Smith reunites with the Flames whenever a gig comes up, and still retains the passion for rockabilly that was ignited in him by Elvis over fifty years ago.
Scott Baretta Oxford, MS 2008