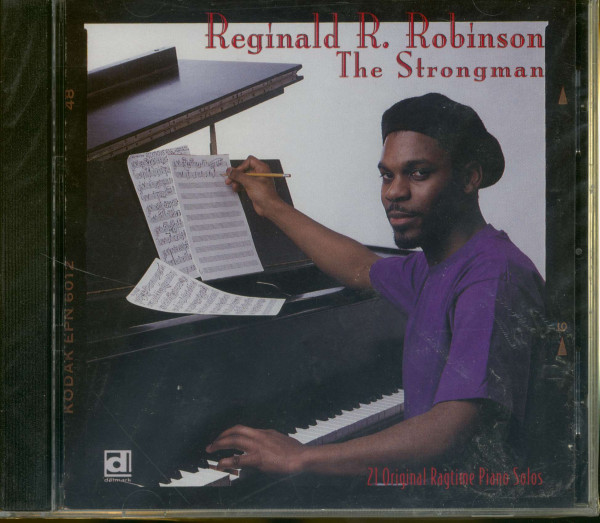 Reginald R. Robinson has been playing and composing ragtime music since he was 15. This prodigous 20 year old has impressed the likes of Ira Sullivan and Marcus Roberts his inventive tunes and successful style.

Reginald R. Robinson is an extraordinarily gifted young pianist and composer from Chicago who plays his own ragtime compositions with amazing grace and dexterity. "Ragtime seems mysterious to no - that why it appeals to me," he says, adding that his "inspiration for ragtime is boundless - it never ends." When I first encountered Reggie, I thought he was something of a mystery too. For one thing, I couldn't imagine how he was able to develop his astounding technique and gifts as a composer in such a short period of time. And then I was wondering what this young African-American from the inner city was doing with ragtime. In response to the latter, Reggie says, "My family calls me crazy because I'm the only child I know of who had an interest in ragtime. In fact, I wrote one of my tunes, Strong Man, 'cause you have to be strong in this day and age to play ragtime. "But it (the music) appealed to me. for one thing, other people weren't paying attention to it, so it became more personal for me. It was music I could tun to and escape in.

Before I heard ragtime, the only jall I listened to was the big band records my brother had." By the time Reggie was thinner, the dream of being a ragtime pianist took hold. A group of musicians had come to his grade school to put on a cultural program for the students. One of the numbers they played was The Entertainer  by Scott Joplin. It was lively and bouncy, and the way it was presented caught Reggie's ear. Soon afterward Reggie asked his mother to buy him a keyboard so he could play ragtime and he kept after her until she came back from the store one day with a little electronic keyboard that wasn't much more than a toy. But, it was enough to get him started. To was also going to the library to read up on ragtime and learned a bit from some encyclopedias and a book about African-American music. Another source of learning for Reggie was radio. "I used to listen to the Dick Buckley show and to Steve (ushing's Blues Before Sunrise. I think I was the only kid in my neighborhood who listened to Studs Terkel.

I thought it was interesting. I taped all these artists off the radio. I have thousands of hours of music on tape." "The ragtime era lasted from 1893 to 1911," he said, "and it seemed like a more elegant era to me than the one I was living in. I looked at the pictures— these musicians were classy dressers. They would be all dressed in hats and ties and wing collars, and I could see them crossing the streets to challenge one another. I read that Buddy Bolden played ragtime. I couldn't And that much out about Scott Joplin, but I read that he didn't speak much; that he was kinds mysterious. I looked at the pictures of the old elevated trains and the streetcars and gas lights, and the way people dressed. It looked very interesting to me and very mysterious. I used to stop and look at the old buildings and wonder what life was like back then."

After dropping out of school at fourteen, Reggie devoted his time and efforts to playing piano. "I wasn't in school so I could play all day long, from the time I got up to late at night. I was drawn to the piano. Sometimes I would play until three in the morning.' All this practice was paying off for Reggie, and it wasn't long before he was recognized for his talent. Laura Hoffman, a piano teacher with a broad musical background (she studied under the likes of Leon Fleischer and Barry Harris) heard Reggie play and was obviously impressed. Reggie sat down and turned out some original material for her down at a local music store and when he finished Laura said with a big smile, "He's a genius!" Soon, Joe Vessia, a musician (violin, guitar and sax) who owned the store, along with everyone else who hap-pened to be in the store was standing near the piano.

Everyone was smiling broadly and looking somewhat amazed. By this time his electronic keyboard had been traded in for a beat-up old spinet. Reggie taught himself to play by practicing and listen-ing. "It was all by ear. I taught myself the major scales— I was playing in every major key and right away I started composing. I couldn't read or write music, but I would dream of writing music. I would look at books of music and be really depressed 'cause I couldn't read or write music." In the summer of 1988 when he was fifteen years old, Reggie bought a Scott Joplin record called The Entertainer which was classic rag-time from rare piano rolls. "It was very complicated music for two hands. I used to listen to the records and play along with my hands in the air. At first, because it was a poor recording, I only heard the bass note in the left hard. Then I got some better recordings and I leaned what the left hand was doing. One of the songs I learned by ear was The Weeping Willow Rag" By October of 1988 Reggie had earned enough money from his job in a T-shirt factory to take music lessons at the American (onservatory of Music in Chicago.

"It was too expensive for me to keep up, but I kept on seeing him (teacher Ted Borgmann). Mostly I just played for him- I was learning how to read musk. Bargmann is a high class musician; he inspired me just by the way he played Joplin. Chopin was his favorite. Re told me to check it out so I went to a record store and bought Chopin I Love with waltzes and nocturnes. It got me inter-ested in classical music, and I knew SconJoplin had a classical background.' Ted Borgmann has been a teacher at the American Conservatory for fifteen years, and was very impressed with his young student. "Nis talent is amazing. I don't understand it, its astounding to me. I saw his hands, how he held them, how strong his fingers were He had all the right ideas.

He wanted to write out the things (music) he created, but had no idea how it was rotated so I talked to him about note reading" As Reggie became more experienced he began to turn out compositions at an astounding rate. Nis compositions are based on an image or vision he's able to conjure up, with inspiration being provided by Scott Joplin, Chopin, and Jelly Roll Morton. Here are some examples of 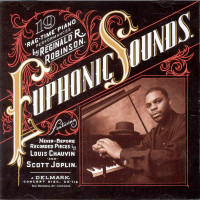