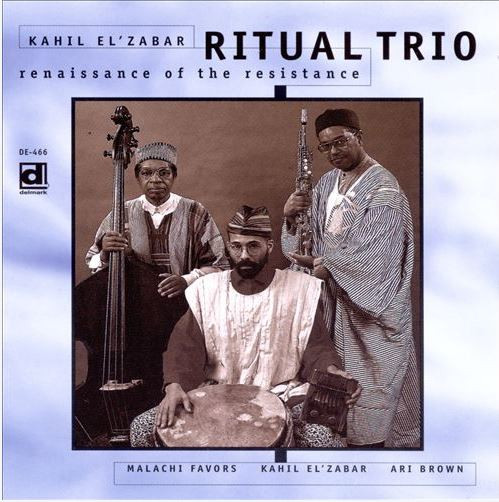 RITUAL TRIO: Renaissance Of The Resistance

(1994/Delmark) 7 tracks In 1993, drummer Kahil El'Zabar and his Chicago-based Ritual Trio (which also includes saxman Ari Brown and bassist Malachi Favors) joined the Delmark roster with Renaissance of the Resistance, an excellent inside/outside date that contains mostly original material. This CD underscores the fact that not all avant-garde jazz is atonal free jazz, on the whole, this is quite musical and melodic. That is true of the funky 'Ornette' (as in Ornette Coleman), as well the evocative title song and the haunting 'Sweet Meat.' Meanwhile, 'Trane in Mind' recalls John Coltrane's modal period of the early to mid-1960s -- it isn't the sort of hard bop that the saxman favored in the late 1950s, nor is it the sort of blistering, atonal free jazz that he got into during the last few years of his life. Unlike the bop snobs who are content to spend their lives hearing the same old standards done the same old way, El'Zabar has very eclectic tastes -- the Chicagoan has stated that his taste in music ranges from soul man Jackie Wilson to traditional Bulgarian choirs. And, true to form, he brings a healthy appreciation of world music to this album, combining jazz with African, Middle Eastern, and Asian influences. In fact, the title song and the peaceful 'Golden Sea' find El'Zabar stretching out on the African thumb piano -- and why not? There is no law stating that a traditional African instrument cannot be used as a jazz instrument. Although 1999's Africa N'da Blues is arguably the best album that the Ritual Trio provided in the 1990s, Renaissance of the Resistance runs a close second. (AllMusic)