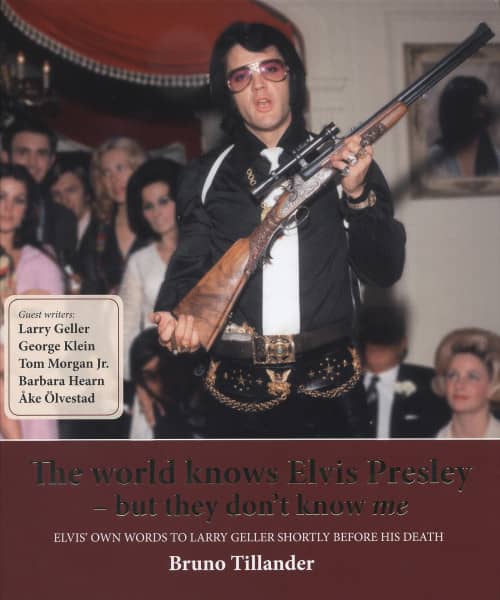 (2014/Premium Publ.) Hardback, english, 21x24 cm, 394 pages, hundreds of rare illustrations;
An interesting portrait which casts a new light on the biggest artist in history!
Elvis Presley was a product of the American social conditions, the mentality of the American South, the attitudes towards weapons and the segregation that permeated the entire American society up until the mid-1960s.
The Southerner Elvis Presley had a weapons fixation, was known to have a temperament, and had a contradictory relationship to the black civil rights movement. He was a reactionary crime-fighter with fictitious role models such as Clint Eastwood’s film character “Dirty Harry”. He supported the Vietnam War and offered President Richard Nixon his services in the fight against communism and left-wing liberal movements. All of these ingredients make Elvis a colorful personality, moving him closer to one of his ideals – the patriot, anti-communist, Republican, gun lobbyist and eternal American icon John Wayne.
Elvis also owned a very extensive and spectacular collection of objects from Nazi Germany, something that until now has been unknown to the general public. He was used by the greedy manager Tom Parker and his network of business contacts in a distasteful way. Elvis was deeply religious, and with the aid of his close friend and spiritual advisor Larry Geller, this book offers an interesting insight into his spiritual faith. The book presents a new and exciting image of Elvis, far from the superficial “Hollywood Elvis” of the silver screen and the official, retouched image of him. This is entertaining reading, an uncensored celebration of a great hero. The book also kills many myths and false after-the-fact stories that have circulated around Elvis for more than 60 years. Introduction by George Klein. Fully illustrated with many unique photos.
Guest writers in this book:
Larry Geller
Shared intellectual interests with Elvis
George Klein
Regarded as Elvis’ best friend
Tom Morgan Jr.
Sheriff’s Department, Memphis
Barbara Hearn
Elvis’ first official girlfriend
Åke Ölvestad
Music historian