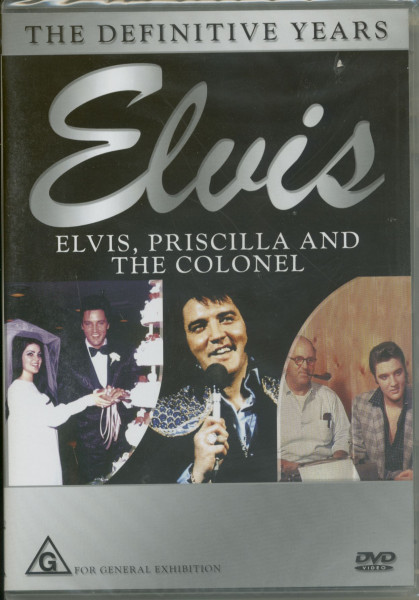 The Definitive Years
Elvis And Priscilla
Every king needs his queen, and Elvis Presley was no exception... During his army years in Germany, Elvis met pretty, fourteen-year-old PRISCILLA BEAULIEU, the "woman" who would eventually become Mrs. Elvis Presley. This is the most comprehensive look ever into the very private lives of one of the most misunderstood — and controversial - couples in the history of entertainment. For the first time, the real story behind this extraordinary romantic pair will be told through previously unheard stories from Memphis Mafia members JOE ESPOSITO, JERRY SCHILLING, SONNY WEST, and LARRY GELLER; as well as others who were really there, such as The Righteous Brothers' BILL MEDLEY, GLEN CAMPBELL, SANDY MARTINDALE, and car-customizer-to-the-stars GEORGE BARRIS, just to name a few. Find out what really went on behind closed doors during one of the twentieth century's most celebrated romances in this powerful and revealing hour.

Elvis And The Colonel
Was Col. Tom the best thing that ever happened to a truck driver Elvis Presley? Or, was he simply a money mad former cart mismanagement and greed ultimately robbed the King of his c becoming a legitimate actor? No other relationship in Elvis' controversial - or misunderstood - as the one he had with I TOM PARKER. For starters, he wasn't really a Colonel, his fl wasn't really Tom, and his last name wasn't really Par misconceptions, half-truths, and out-and-out lies are finally cleared up, thanks to the people who were there to witness this re) firsthand. People like Road Manager and friend JOE E. COLONEL PARKER'S WIFE, LOANNE; Elvis' close friends GEOR and RICHARD DAVIS; celebrity pals such as GLEN CAMPBELL al O'BRIAN, and singing legend EDDY ARNOLD, who was, managed by Parker. Some loved the Colonel; some hated him. the truth behind THE UNIQUE PARTNERSHIP OF ELVIS PRES COLONEL TOM PARKER.