MACK, Warner: The Bridge Washed Out 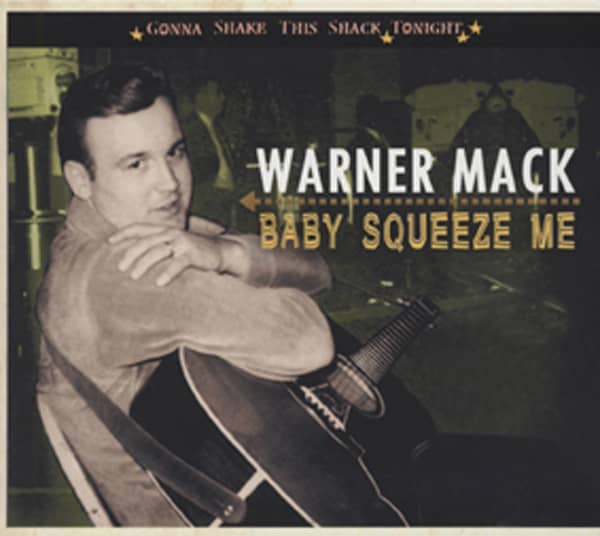 Warner Mack wrote and recorded two classic songs of the rock 'n' roll era – Is It Wrong (For Loving You), and Roc-A-Chicka. If his former English teachers bought records they might have winced at his 1957 recordings - asking him what the 'it' was that is wrong for loving so – but half a million young record buyers seemed to understand well enough what he meant. And Roc-A-Chicka was both nonsense and perfect teen sense. Warner Mack had the knack of knowing what worked.

Warner Mack was one of the best singers and song writers of the '50s and '60s; a man who started out with gospel music and country, briefly embraced rockabilly, then soon demonstrated a real command of rock 'n' roll and rockaballad styles. His was an imposing yet at times plaintive, appealing voice and his songs displayed his rare ability to capture the essence of life and its successes or trials. He had a number of country pop hits in the '60s including Sittin' In An All Night Cafe in 1964 and The Bridge Washed Out in 1965 and many more country hits as a singer and song writer right through to the later 1970s. He owned recording and publishing businesses, Pageboy and Bridgewood, and put his name on Warner Mack's Country Store out of Madison, Tennessee. Through ill-health Warner Mack withdrew from the music scene some years ago and sadly his significant and influential Decca output of the 1950s has largely been forgotten and his part in creating Nashville's sound is little-remembered today.

In this CD you'll find a massive 38 tracks recorded by a young and fresh singer/songwriter during the classic era when rock 'n' roll met the Nashville sound. Here are all 12 tracks from Warner Mack's six Decca singles issued during 1957 and 1958, four tracks from singles issued on Scarlet and Top Rank in 1959 and 1960, and 16 tracks not originally issued from around 1960. Here too are Mack's two very first rockabilly recordings made at Delta Records in Jackson, Mississippi, in 1957. As a bonus there are three advertising spots Warner made for the Mary Carter Paint Company – and finally there's a live radio recording from 1958.

Unlike most country singers Warner Mack was actually born in the town that became synonymous with the music. But that was in 1935 when no-one had ever made a record in Nashville and the city had only recently seen the start of the radio barn dance that became the 'Grand Ole Opry.' In Warner's young day, some of the performers were still wearing suits and the corn-ball image of rural music was still being created. 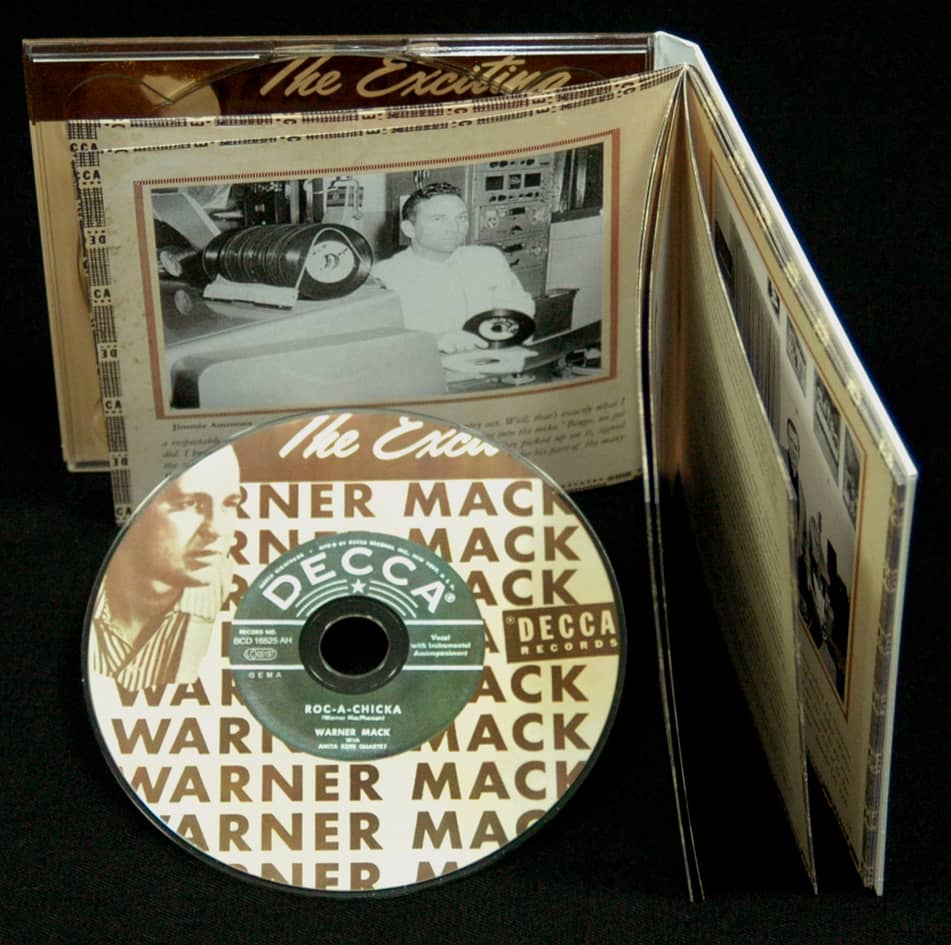 He was born Warner MacPherson on April 2, 1935, and he told me: "I was born in west Nashville in 1935. I guess you could say I was there long before Music Row ever was". He wasn't in Nashville for long though. He explained: "We moved to Vicksburg, Mississippi, in 1942. My dad was a Minister and he'd travel around to take his message wherever he could. We'd often go to Vicksburg on the weekends and come back Sunday night to Nashville. Then came the time when daddy had a church down there so regularly that we moved to Vicksburg for some years."

Warner's father was the Reverend Warner H. MacPherson. His son described how, "dad's one goal was to win people to the Lord. For his services as pastor and evangelist he never received more than $40 a week but the Christian heritage he left me is something money could never buy. When we were growing up all our family sang together: Dad, mom, my sister Juanita, Dean and I. Dad Dean and I sang together most, in churches, school houses, tents, and even under brush arbours – anywhere dad found an opportunity to present the gospel."

Warner attended Carr Central Grade School and then Jett High School, both in Vicksburg. He told me, "Apart from singing in church, I also developed a real interest in country music. I sang the songs of Hank Williams and Eddy Arnold particularly. I loved the vocal style of Hank and also his writing. From the first time I started picking on a guitar I knew I loved country music. It's part of my life. I remember as a child listening to radio while my friends played outside.

I used to stick my hand on top of the radio and try to pick up the Opry show as a nine year old and by 14 I was practicing guitar and playing along with my own songs. When I was in school I was already singing whenever I could but I didn't play go out to venues to entertain very much. I never did sing in any nightclubs because my dad was a Minister. So I sang at furniture store openings, school contests, and so on."

On leaving school Warner worked at a clothing store in Vicksburg and then worked for the B. F. Goodrich tire company. Later on, his record company biographies made great play of the fact that Warner was a top-class sportsman, a well-built young man with skills at baseball and football that led to offers from several Mississippi and Louisiana Universities and a pro baseball offer from the St. Louis Cardinals. Of this, Warner just told me: "I always wanted to be a singer. You have to go with what your heart tells you". The reality was that by 1955 Warner was a working man, was married to Peggy, a girl he had met in High School, and that his biggest thrill came when he heard of a job opening as a disc jockey.

He told me, "When I got out of school I worked at several things but pretty soon I found a job working at a radio station in Vicksburg, WVIM. The manager there was Mr. Jack Shay and I just worried him to death about him letting me work there until one day he gave in and hired me. In those early days I always wanted to be a songwriter and a singer. I had started writing some songs back when I was around thirteen years old or so. I would just work them out while I was around the house, fooling about with ideas and so on. I've still got some songs in my memory that I wrote back then but never did record. That's why I went to the radio station – it got me close to the music."

There came a time around 1956 when the music Warner wanted to be close to was the new rocking sound from Sun Records in Memphis embodied in Elvis Presley. At some point at the end of 1956 or the start of 1957 Warner travelled to Jackson, Mississippi, to try out for a company there as a rockabilly singer. He recorded demo versions of Presley's Baby Let's Play House and Warren Smith's Ubangi Stomp and of two or three of his own original songs. Warner recalled little of the session, telling me: "I cut some demos at some little studio over in Jackson, but I don't remember the name or all the songs I did there. I think I did 'Roc-A-Chicka' and 'Is It Wrong' there." The owner of the 'little studio' in Jackson did remember Warner though. He was Jimmie Ammons who ran the Delta Recording Studio from a building next to a cow pasture on the edge of town.

Jackson musician Don Pittman remembered what Jimmie Ammons had told him about Warner. "It seems that Warner and his band (the names of the members escaped his memory) came to Delta Studios for more than a month on Sunday afternoons for Jimmie to work with them. Jimmie told me, 'I really just didn't like the sound I was getting on Warner's voice and couldn't seem to come up with anything that seemed to work. It was a little, shall we say, high-pitched for my liking. At that time my dad had a watering tub for cows out back and I had the idea of putting the microphone down in this tub and have Warner just sing into it. I was desperate to get a respectable sound for what I felt like was a very promising country act. Well, that's exactly what I did. I brought it in, put the mike down in it and said, 'Warner just sing into the mike.' Bingo, we got the type echo sound I was looking for. Off to Decca Records it went. They picked up on it, signed Warner and he had himself a hit.' Jimmie told me he managed to get $16.00 for his part of the many hours spent with Warner."