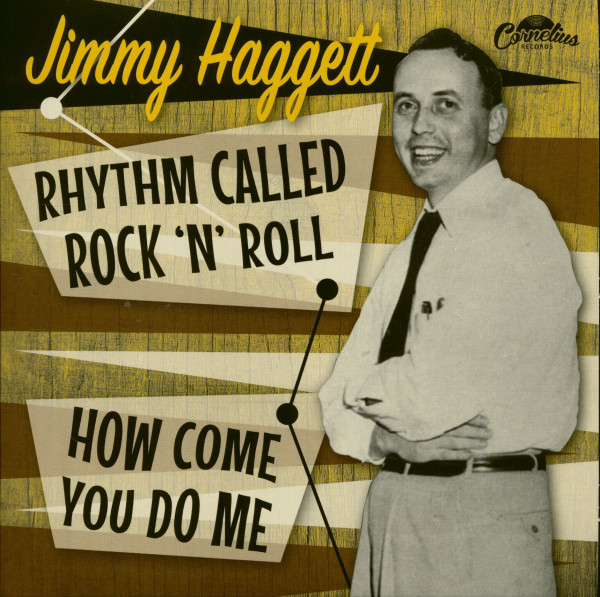 Jimmy Haggett: Rhythm Called Rock'n'Roll - How Come You Do Me (7inch, 45rpm)

JIMMY HAGGETT, or James Clecy Haggett to give him his full name, cut two very different sessions for Sun. The first resulted in a rather lackluster country single that did little or no business; the second was raw, pumped-up rockabilly. Nothing from the second session was released at the time, and the tape box was unmarked. When the rockabilly sides were first issued, it was under Junior Thompson’s name.

“Yes they are different,“ conceded Jimmy, who hung onto an acetate of the songs given to him after the session, “but I was trying to get in with the rock ‘n’ roll craze because we were entertainers“. Originally from Granite City, Illinois, where he was born on December 2, 1928, Jimmy was first and last a radio man. He went on to record for Meteor and Caprock Records, but long after he stopped performing he continued to work as a dee-jay and then as part-owner of a radio station.

As far as Jimmy remembers, Rock Me Baby was recorded in late 1956 and featured Charlie Hardin on guitar, Jackie Lee Adkins on bass, and Don White on drums. The spirit of Carl Perkins looms large over the session, and as Sam Phillips was having a hard time selling Perkins after Blue Suede Shoes he probably concluded that he didn’t need someone who sounded like Perkins.