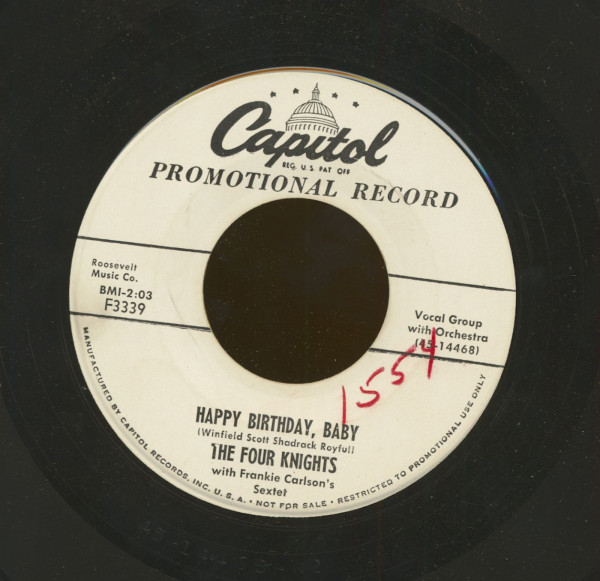 That's The Way It's Gonna Be

After spending most of their distinguished career as a pop-oriented outfit with plenty of network radio exposure but precious few hits until they signed with Capitol in 1951, The Four Knights temporarily veered into more an R&B direction the next year.

Like The Larks, the Knights originally hailed from North Carolina - Charlotte, in their case. Lead tenor Gene Alford, tenor/guitarist John Wallace, baritone Clarence Dixon, and bass Oscar Broadway were a spiritual aggregation, The Southland Jubilee Singers, before they changed their handle to The Four Knights and went secular in 1945. They signed with Decca the next year, later switching to the company's Coral subsidiary, but it wasn't until they switched to Capitol in '51 that the Knights began scoring hits on a somewhat consistent basis.

Howard Biggs and Joe Thomas were A&R men at RCA Victor, though their swinging composition That's The Way It's Gonna Be found its way to the Knights at Capitol, which released the single in August of 1952 with the frantic Say No More on the flip. The single didn't make the same pop splash that their I Love The Sunshine Of Your Smile had the year before - maybe it was too R&B-oriented for their longtime audience, with a booting two-chorus sax solo - but it's one of their most exciting discs.

The shift didn't hold long. I Get So Lonely (When I Dream About You), the Knights' biggest seller of all in 1954, sailed to #2 in the U.S. and #5 over in Great Britain but returned the Knights to the pop milieu, though it did ride a bouncy, infectious tempo. Alford was permanently sidelined by epilepsy in the mid-'50s, the Knights soldiering on with George Vereen and then Clinton Holland taking his place. They pulled double duty at Capitol for a time, harmonizing with Nat 'King' Cole on the 1956 hit That's All There Is To That and the next year's My Personal Possession as in addition to waxing their own singles. The quartet managed a last pop hit for Coral in 1959, O' Falling Star, making it into the mid-'60s before calling it quits.