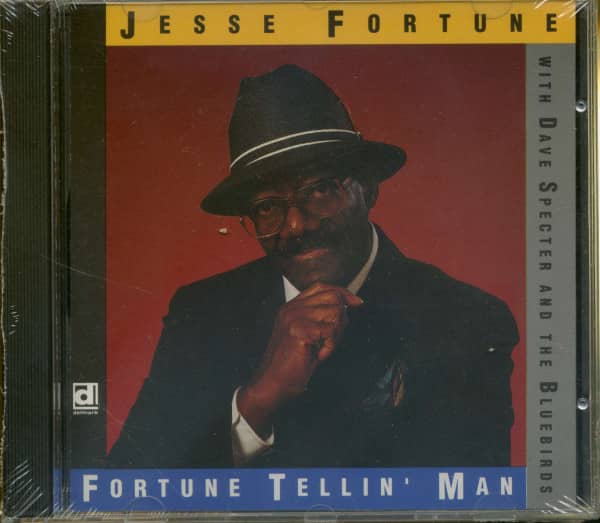 It doesn't happen very often anymore. An obscure blues figure, revered by aficionados for a handful of memorable recordings, leaps right out of the dusty discographical pages and materializes in the flesh with something new to say musically.

In Jesse Fortune's case, that's precisely what has happened--and this long-overdue debut album, a sizzling collaboration between the veteran Chicago vocalist and Delmark's acclaimed young combo, Dave Specter and the Bluebirds, is the happy result. Jesse's enthusiasm blasts forth every time he sings on this album.

It doesn't happen very often anymore. An obscure blues figure, revered by aficionados for a handful of memorable recordings. leaps right out of the dusty discographical pages and materializes in the flesh with something new to say musically. In the process. he's suddenly rescued from an extended bout with undeserved anonymity. It's even a rarer occurrence when that artist returns to active status with his voice soaring as majestically as it did three decades ago. In Jesse Fortune's case. that's precisely what has happened—and this long-overdue debut album. a sizzling collaboration between the veteran Chicago vocalist and Delmark's acclaimed young combo. Dave Specter and the Bluebirds, is the happy result. After cutting a pair of exceptional singles for Chicago's USA label in the spring of 1963, the singer disappeared from the recording scene.

But for the last year or so. Jesse's been the featured front man with Specter's group. and his pipes are as strong and supple as ever on Fortune Tellin' Man. Actually. Jesse Fortune was never really gone. He was just a trifle hard to locate. generally confining his musical activities to small clubs that don't cater to the yuppie trade. In fact. you're more likely to find Jesse at The Style Barber Shop, located on Pulaski Road just south of Madison on the West Side, expertly cutting hair as he's been doing since the late 1960's. Born in Macon. Mississippi on February 28. 1930. Jesse moved to Hattiesburg at the age of six and grew up there. Heavily influenced by the blistering blues vocals of B.B. King as he matured. Jesse relocated to the Windy City in 1952 and began his professional singing career by gigging with guitarist Little Monroe at a joint called the Cotton Club at Clybourn and North Halsted. Fortune made the rounds of the club scene, singing with guitar legend Otis Rush at the Castle Rock and Buddy Guy before producer Willie Dixon, always on the lookout for fresh talent. recognized Jesse's potential.

"He heard me. and I started asking him about recording, because he was in the business," says Jesse. On April 26, 1963. Fortune cut four impressive sides for the USA label under Dixon's savvy stewardship. with stellar backing from an all-star aggregation that included Big Walter Horton on harp. Lafayette Leake on piano and Buddy Guy on guitar. Although "Good Things" and "Heavy Heart Beat- were typically solid Dixon productions, the standout performance from the date was the rhumba-rocking, minor-key masterpiece "Too Many Cooks" (faithfully revived on this set). which Robert Cray saw fit to cover on his 1980 debut album for Tomato. But Jesse's budding recording career ended as abruptly as it began. "I didn't do another session because I didn't get anything out of that session. not a quarter." he explains. Flashing forward almost 30 years, we encounter Dave Specter, a young guitarist with a rare affinity for the vintage guitar sounds of T-Bone Walker. Kenny Burrell and Magic Sam.

Bluebird Blues (Delmark 652). Specter's debut album with Barkin' Bill Smith, won national acclaim for its relentless sense of swing. The Bluebirds drive with unerring power as Jesse pays roaring tribute to his idol on revivals of King's "Be Careful With A Fool"and "Dark Is The Night- and imparts Ray Charles' foreboding "Losing Hand- with an ominous sense of doom. Jesse wrote the lowdown and ironic "Get Mad At My Money Too"and the joyous "Lovingest Woman In Town, "while Specter contributed the searing title track. The Bluebirds are showcased on three instrumentals that reveal their versatility: "Specter's Walk- and a revival of Clifford Brown's "Sandu- stress Specter's growing interest in jazz, while the torrid boogie "Ain't About Money"was put together on the spot by prolific pianist Ken Saydak. who also graced Bluebird Blues, Since Jesse never enjoyed an opportunity to tour behind his best-known tune, he eagerly anticipates hitting the road at an age when most bluesmen are weary of traveling—and his boundless enthusiasm blasts forth every time he sings on this album. Jesse Fortune is no longer one more mysterious name in the blues archives. Thirty years after his vinyl debut. he's finally on his way.